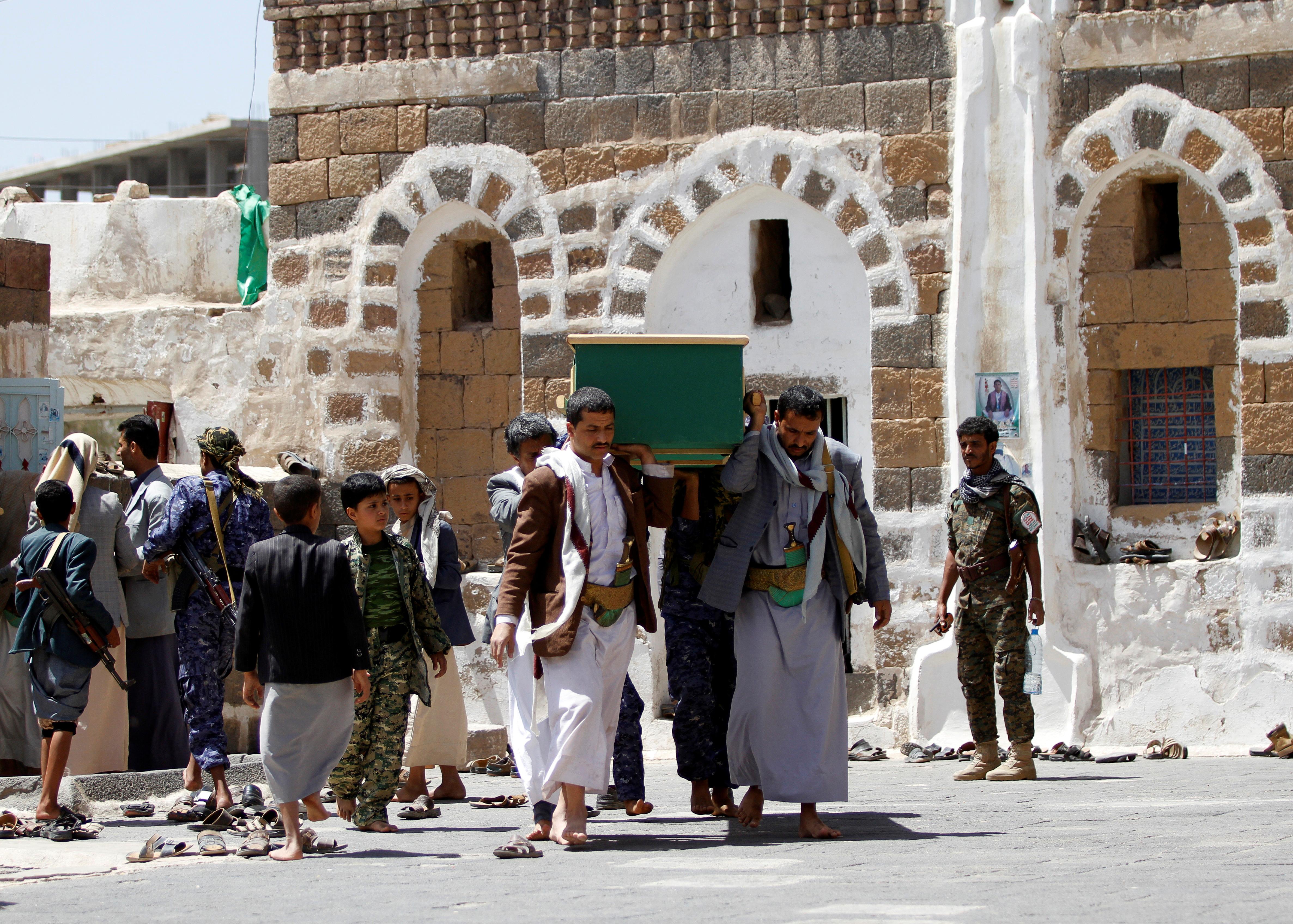 A Saudi-led coalition backing the internationally recognized government has been providing air support to tribes in Hajjah province battling the Iran-backed Houthi group. Last week, air strikes on Kushar district killed 10 women and 12 children and wounded 30 people, including 14 under the age of 18.

The coalition blamed the deaths on shelling by Houthi fighters that struck the houses of tribesmen.

Many of those killed and wounded were transported to the Houthi-held capital Sanaa. On Thursday, mourners carried wooden coffins, painted green, to the Grand Mosque for prayers.

Eleven victims were from the same family, residents said.

A procession weaved through Sanaa’s dusty streets as Houthi activists with megaphones denounced the “Saudi aggression”. “Death to America, death to Israel!” the crowd chanted.

Tens of thousands of people have been killed in the conflict that pits the Houthis against the Saudi-backed government of Abd-Rabbu Mansour Hadi. The Sunni Muslim alliance intervened in the war in March 2015 in support of Hadi after his government was driven out of Sanaa by Houthi forces in late 2014.

Coalition leaders Saudi Arabia and the United Arab Emirates are under pressure from Western nations, some of which supply arms and intelligence to the alliance, to end a war that has pushed the poorest Arab state to the brink of famine.

UNICEF said in a statement that since the beginning of March more than 37,000 people had been displaced within Hajjah province – around half of them children.

“The situation is difficult with the air strikes and the tank fire. Some people lost their children, houses were destroyed. We rescued whoever we could and we left the dead,” Mohammed Sagheer, one of the displaced, told Reuters.

The Norwegian Refugee Council (NRC) said fighting over the past six months has forced over 203,000 people to flee to safety in Hajjah, almost doubling the number of displaced people in the northern governorate to 420,000.

“Whilst the eyes of the world are on Hodeidah, air strikes and shells continue to rain down on civilians in other parts of Yemen, killing with impunity,” Nigel Tricks, NRC’s East Africa and Yemen Regional Director, said in a statement this week.

The warring sides reached a deal at U.N.-led peace talks last December, the first significant breakthrough in more than four years, for a ceasefire and troop withdrawal from the main port city of Hodeidah on the Red Sea.

The truce has largely held but the troop withdrawal has stalled due to deep mistrust among the parties, risking U.N. efforts to hold another round of talks to agree a framework for political negotiations to end the war.

The five permanent members of the U.N. Security Council said on Tuesday they were “extremely concerned” about the lack of progress and urged both sides to implement the pact.

The U.S. Senate on Wednesday approved a resolution seeking to end U.S. support for the coalition, in a strong message to Riyadh over the Yemen war and the murder of a Saudi journalist at the kingdom’s Istanbul consulate last year.

The conflict is widely seen in the region as a proxy war between Saudi Arabia and Iran. The Houthis deny they are puppets of Tehran and say their revolution is against corruption.