From the beginning of Saudi Arabia's intervention in Yemen, it was Prince Mohammed's war. 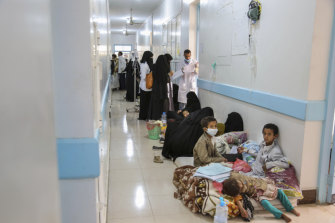 Patients suffering from suspected cholera wait to receive treatment at a hospital in Yemen’s capital, Sanaa.Credit:UNICEF/File

Some Western and United Nations diplomats hope that the Emirati withdrawal will push Prince Mohammed to negotiate a deal with the Houthis, potentially trading an end to the Saudi-led air campaign for some measure of security on the long border. He already faces mounting criticism in Congress and across the West for the war's devastating impact on civilians.

But Prince Mohammed has now consolidated power as de facto ruler under his ageing father, King Salman, and faces little domestic pressure to end the war.

The royal court controls the news media and with Saudi forces largely in the air, there have been few reports of Saudi casualties.

Prince Mohammed "never seemed to me to see this as the most important thing in his life", said Joseph Westphal, a former US ambassador who served in Riyadh from the beginning of the intervention through to early 2017. 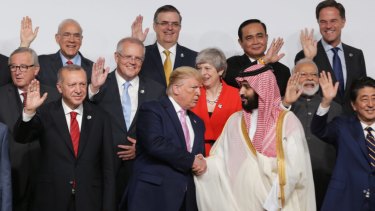 One reason the war has not generated more domestic opposition, he said, is that the fear of Iranian influence that motivated the intervention "is not just limited to the royal family — the Saudis just have an intense, passionate feeling that they are under threat".

Boxed in, Prince Mohammed has asked for more aid from Washington. The US already provides intelligence and logistical support and sells weapons to the Saudis. The Saudis are hoping for at least greater sharing of US intelligence and possibly the deployment of special forces teams or military advisers, diplomats said.

But Washington, the Saudis complain, has sent mixed messages about its support for the war. To the surprise of Saudi leaders, outrage over the Saudi killing and dismemberment in October of dissident journalist Jamal Khashoggi, who lived in Virginia and wrote for The Washington Post, prompted US legislators to look more sceptically at the war in Yemen. 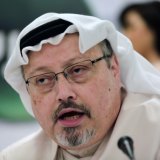 Jamal Khashoggi was killed in the Saudi consulate in Istanbul by Saudi government hitmen.Credit:AP

Congress passed legislation this year demanding an end to US military support for the war, including arms sales to Saudi Arabia. Pentagon officials, meanwhile, have concluded on their own that the war has degenerated into an unwinnable quagmire and have urged the Saudis for months to try to negotiate an end to the fighting.

But US President Donald Trump has repeatedly vetoed legislation cutting off US support for the war. As tensions with Iran have heated up, other administration officials — like Secretary of State Mike Pompeo and John Bolton, the national security adviser — have sounded almost as hawkish as the Saudis about the danger posed by Iran's alliance with the Houthis.

At a US-sponsored conference in Warsaw in February, Pompeo bluntly told the Saudis and others that the coalition fighting in Yemen should kick the stuffing out of the Houthis, one diplomat present said, although he said Pompeo used an earthier noun than stuffing. The diplomat spoke on condition of anonymity to describe a private meeting.

"Why haven't the Americans carried out a single operation to help?" asked Mustafa Alani, a scholar at the Saudi-backed Gulf Research Center who is close to the royal court.

He recommended that the Saudis take a blunter approach to convincing Washington that the Houthis were an American problem: withdraw completely and let the US deal with the anti-Western militants and Iranian surrogates he says would overrun Yemen.

"I would do what the Americans did in Somalia," Alani said. "Turn off the light, shut the door and say, 'to hell with it'."

Last week, allies of Tareq Saleh, a maverick nephew of the late Yemeni dictator Ali Abdullah Saleh, floated the idea that the Saudi-led coalition had tapped him to be the new leader of the Yemeni forces previously under the UAE.

That did not last long. A powerful Islamist militia known as the Giants Brigade, also backed by the UAE, quickly issued a statement saying that it would never accept Saleh because he was from northern Yemen, not the south.

Then another powerful militia, composed of southern Yemeni separatists paid and armed by the Emiratis, began promoting itself as the successor to Emirati leadership.

The separatists are the sworn enemies of the Yemeni president sponsored by the Saudis, Abed Rabbu Mansur Hadi.

"The problem for the Saudis today is that in contrast to the Emiratis, their main client is quite weak and ineffective," said Emile Hokayem, a scholar at the International Institute for Strategic Studies, referring to Hadi.

Whatever happens now, Hokayem added, "whether they like it or not, the Saudis own that".