Washington: US President Joe Biden has called the evacuation from Afghanistan an extraordinary success in his first public remarks since the United States withdrew its military from the country, ending a 20-year war.

In a speech at times defiant, Biden said the choice in Afghanistan was between leaving or escalating the conflict. Biden pointedly stressed that exiting the war-torn nation would allow the US to focus on future security challenges such as China. 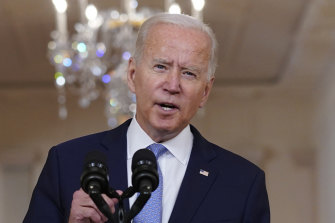 US President Joe Biden speaks about the end of the war in Afghanistan.Credit:AP

Biden said the US succeeded in what it set out to do in Afghanistan over a decade ago, adding that he was the fourth president to have to decide on whether to stay the course or leave.

Biden rejected criticism of his decision to stick to his withdrawal deadline this week, a move that left 100 to 200 Americans in the country along with thousands of US-aligned Afghan citizens.

In a televised address from the White House State Dining Room, Biden criticised the ousted Afghan government’s inability to fight back against swift Taliban advances, which forced the US and its NATO allies into a hasty and humiliating exit, and highlighted the role played by former US president Donald Trump.

The deal brokered by Trump authorised “the release of 5000 prisoners last year, including some of the Taliban’s top war commanders, among those who just took control,” Biden said. 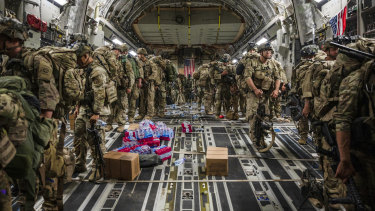 Members of the 82nd Airborne Division, deplane a US Air Force C-17 Globemaster III aircraft after touching down at Ali Al Saleem Air Base, Kuwait. Credit:AP

“By the time I came to office, the Taliban was in its strongest military position since 2001, controlling or contesting nearly half of the country,” he said.

US officials believe those Americans who remain in Afghanistan have “some intention to leave”, Biden said. He said most were dual citizens and long-time residents who earlier had decided to stay, adding the US was determined to get them out.

Biden said the government had reached out 19 times since March — prior to his public announcement that he was going to end the US war — to encourage all American citizens in Afghanistan to leave.

Even if evacuations had begun in June or July, he said, “there still would have been a rush to the airport” by people wanting to leave.

The departure of the last US troops from Afghanistan this week as the Taliban took over caps two decades of military involvement that Biden was determined to end.

While most Americans agreed with him, that end has not come smoothly. Biden’s presidency, which had been focused on fighting the coronavirus pandemic and rebuilding the economy, now faces political probes over the handling of the withdrawal as well as the logistical challenge of finding new homes for thousands of Afghans being moved to US military bases.

Biden also must contend with a surge in coronavirus infections, disasters like hurricanes and wildfires, and a series of difficult deadlines to get signature spending measures through Congress.

The US President is under heavy criticism, particularly from Republicans, for his handling of the final evacuation, which successfully airlifted more than 120,000 people from Kabul airport.

Republicans are expected to use the crisis to try to derail Biden’s policy and legislative agenda and as a talking point in the 2022 midterm elections. Republicans hope to take control of the Senate and House of Representatives from Biden’s Democrats, which could hobble the second half of his presidency.

A new Pew Research Centre survey said 54 per cent of Americans believed it was the right decision to withdraw troops from Afghanistan, but 42 per cent said the Biden administration has handled it poorly.

Only 27 per cent said the administration had done a good or excellent job.

Biden said he chose to end the war in Afghanistan to focus the nation’s defences on other security problems, including China and Russia.

“The world is changing,” he said. “We’re engaged in a serious competition with China.”

“We’re dealing with the challenges on multiple fronts with Russia.”

“We have to shore up America’s competitive [ability] to meet these new challenges in the competition for the 21st century,” Biden said.

The US can “fight terrorism and take on new threats that are here now and will continue to be here in future.“

“There’s nothing China or Russia would rather have [or] would want more in this competition is for the United States to be bogged down another decade in Afghanistan.“

“As we turn the page on the foreign policy that’s guided our nation the last two decades we’ve got to learn from our mistakes.“

The US must set missions with clear goals, and not “ones we’ll never reach” and stay clearly focused on the “fundamental” national security interest of the country.

“To those asking for a third decade of war in Afghanistan I ask, ‘What is the vital national interest?’” Biden said.

“I simply do not believe that the safety and security of America is enhanced by continuing to deploy thousands of American troops and spending billions of dollars in Afghanistan.”

“The fundamental obligation of a president, in my opinion, is to defend and protect America, not against threats of 2001 but against the threats of 2021 and tomorrow,” he said.

He vowed to continue counterterrorism operations, including against any threats emanating from Afghanistan. He says this can be done with forces based outside of Afghanistan.

Leading House Republicans, including the top Republican on the Foreign Affairs Committee, Michael McCaul, said they wrote on Monday to Biden’s national security adviser, Jake Sullivan, requesting details of the plan to repatriate Americans and evacuate others left behind.

“Congress has a right to know how these evacuations will be facilitated and conducted,” McCaul said in a statement.