WorkSafe Victoria will examine if employees of Ambulance Victoria are at risk after widespread claims of bullying, sexual harassment and abuse within the service.

Professionals Australia and the Victorian Ambulance Union have called on the state's health and safety regulator to pursue claims of "bullying and harassment of staff by senior managers".

WorkSafe and the ambulance service have confirmed meetings start this week. 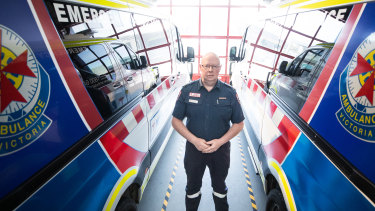 Ambulance Victoria CEO Tony Walker says he has been “blown away” to hear stories from his staff about the impact of workplace maltreatment.Credit:Jason South

In the past fortnight, dozens of Ambulance Victoria paramedics and corporate staff told The Sunday Age of sexual harassment and sexual abuse at work, high-level bullying, sex discrimination and victimisation within Ambulance Victoria, and “a culture of retribution”.

A WorkSafe spokeswoman said the body is "making inquiries" into the claims, which Professionals Australia, the union representing corporate employees at Ambulance Victoria, says are affecting workers' physical and mental health.

The next step could be to launch a full-blown investigation into the allegations, and if instances of "gendered violence" were found to have occurred, prosecutions could follow.

Ambulance Victoria CEO Tony Walker and board chairman Ken Lay on October 27 commissioned a full inquiry by the Victorian Equal Opportunity and Human Rights Commission. They said they had been rocked by employees' stories and vowed to out bullies and harassers.

An Ambulance Victoria spokesman said on Saturday that "over the past fortnight, our CEO Tony Walker has heard from and spoken to many staff who have come to him to share their stories. These span a range of experiences of sexual harassment, bullying and discrimination". She said Mr Walker was encouraging staff to engage with the inquiry when it begins.

An equal opportunity commission spokesman said the terms of reference were expected soon and mechanisms were being established to ensure people were not re-traumatised by needing to tell their story multiple times.

Professionals Australia CEO Jill McCabe said "work should not lead to mental health harm and union members have shared with us the devastating impacts of bullying and harassment at Ambulance Victoria on their mental and physical wellbeing.

"We’re meeting with WorkSafe this week to discuss this priority issue. It will be critical to identify the underlying workplace factors in Ambulance Victoria that are contributing to the culture of bullying and harassment and for comprehensive action to be taken to control these risks."

Danny Hill, secretary of the Victorian Ambulance Union, said he had also spoken with WorkSafe and hoped to attend a joint meeting with the watchdog and Professionals Australia this week.

Mr Hill met with Health Minister Martin Foley last week to seek his assurance the inquiry would look into all areas of Ambulance Victoria operations. He said the union had last week received 70 new testimonies from paramedics about maltreatment at work, on top of 50 it had already received.

One was from a woman who as a graduate paramedic was "lifted off her chair by the scruff of her neck and pulled onto a couch and held down", by her far more senior male clinical instructor.

On Friday she told The Sunday Age: "When we attended hospitals [the same man] would refer to me as 'the retard' and 'loser' and at times as [a racial slur]'. This happened in front of my AV colleagues, hospital staff and or course other patients and families.

"I would think of ways to end my life and make it look like an accident because I didn't have the guts to resign and appear like the mum that just gave up without a fight … years later I heard this person was doing similar things to other grads, destroying their confidence."

WorkSafe said Victorian employers have an obligation under the Occupational Health and Safety Act "to take every reasonable step to protect workers from risks to both their physical as well as their mental health, including risks associated with gendered violence".

"Employers also have a duty under the Equal Opportunity Act to take reasonable steps to eliminate certain acts of work-related gendered violence, which can be offences under criminal law."

People who have experienced discrimination or sexual harassment can contact the commission's Inquiry Line on 1300 292 153 for more information about their rights and how they can make a complaint.