Women working at JB Hi-Fi stores have complained of regular sexual harassment and even assault from customers and a “boys club” work environment that does little to support them.

The complaints include being groped and hit on by “sleazy” customers, asked out on dates, harassed for wearing shorts and subject to sexist comments by management. 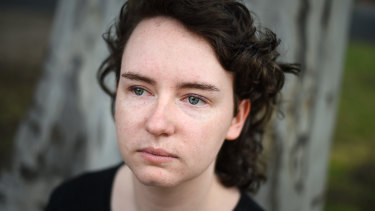 Brenna Dempsey works at JB Hi-Fi and is speaking out against harassment and discrimination against women at the retailer.Credit:Justin McManus

Another key complaint is the best-paid jobs, such as commission-based sales jobs or managerial roles at JB Hi-Fi, were dominated by men.

Brenna Dempsey, who works at a Melbourne JB Hi-Fi store, is a spokeswoman for a group of women involved in a Retail and Fast Food Workers Union campaign and survey on the issues.

“In campaign meetings there’s some really horrific stories, violent awful things where (afterwards) people have to continue to work and management won’t do anything about it," she said.

“There’s a real culture of just shutting up and getting on with things. I think there’s an issue with people not wanting to come forward at all.”

The Sunday Age has spoken to three other JB Hi-Fi workers, who asked not to be named, fearing repercussions from management, who described instances of harassment and discrimination.

The women said there was no training in dealing with sexual harassment from customers and they want to see changes in workplace policies and culture.

A spokeswoman for JB Hi-Fi said its team and its safety was its “number one priority”.

“We are committed to ensuring everyone in our team is respected, and our business is safe, inclusive and welcoming for everyone,” she said.

The spokeswoman did not directly respond to questions on whether there was staff training on how to deal with sexual harassment from customers but said they were committed to investigating and addressing concerns.

“We have processes in place for any team member to raise concerns of gender discrimination or sexual harassment, including internal reporting channels, and an independent external reporting hotline.”

A Sydney JB Hi-Fi worker who has worked for more than 10 years at the company “on and off” said she is “hit on” regularly by customers. “Probably it happens every couple of months.”

She started working at the chain at 18 and said sometimes she’d even be groped and inappropriately touched by customers. “There’s obviously training for the job but not training for what to do when customers are sleazy and hitting on you,” she said.

“If I was in the pub, I’d have no issues with basically saying f— off, but when you’re in the workplace there’s just that power imbalance. You are there to provide help and advice (to customers) and that person is obviously being inappropriate.”

A woman who currently works at a JB Hi-Fi store in Melbourne said the retailer was a “boys club” and the first encounter she had with the store manager was him saying he wanted to hire Brazilian girls “because they’re hot.”

She said she was regularly hit on by customers, even asked out on dates. “I tell them I’m sorry I have a boyfriend or sometimes I tell them I am gay.” 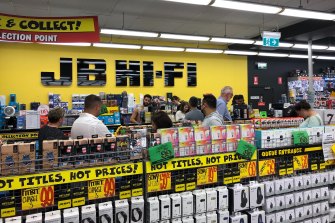 Women working at JB Hi-Fi have described it as a “boys club”.Credit:Fairfax Media

A friend of hers was “objectified by wearing shorts to work and now she doesn’t”. When she complained to her manager, he laughed.

Another worker at a Melbourne store said she had experienced groping and unwanted touching from when she started work as a teenager. Customers would also demand only to be served by men.

“I have friends and colleagues subject to sexual harassment in store. They feel very afraid to do anything and speak out about it.”

The women said when they did complain to managers they either got little or no support. Often they did not feel comfortable or see any point making complaints as the attitude was the “customer is always right”.

The women are members of RAFFWU, a newish rival to the more employer friendly shop assistants union.

RAFFWU secretary Josh Cullinan said issues of harassment and discrimination were treated far more seriously at other retailers such as Coles, Woolworths, Officeworks or Bunnings.

“Every woman I speak to (at JB Hi-Fi) has a story, or they’ve seen it happen to someone else,” he said.

Mr Cullinan said JB Hi-Fi’s approach on these issues appeared to be 20 to 30 years behind other big retailers. “That gender pay gap is not just offensive, we consider it to be unlawful.”

Figures lodged with the Workplace Gender Equality Agency show that women make up 41 per cent of the workforce at JB Hi-Fi. That’s far less than the Australian average where 54 per cent of the retail workforce is women.

About 70 per cent of managers at JB Hi-Fi were men, the figures showed. Mr Cullinan said this was well above the industry average.

In response to claims it’s a boys club, the company spokeswoman said “diversity, including gender diversity, is a high priority for JB Hi-Fi”.

“While representation of women in our business compares favourably to industry comparison groups, we are committed to continuing to improve the diversity of our workforce.”

“We have a diversity strategy, objectives and initiatives in place to improve the representation of women in leadership roles over time.”

Do you know more? Send us a confidential and encrypted message on Journotips or to [email protected]