Woman, 25, is ‘lucky to be alive’ after a step from a passing lorry smashed through her windscreen and broke her nose

A woman is ‘lucky to be alive’ after the step from a lorry’s cab smashed through her car windscreen and broke her nose – leaving her covered in blood.

Dominique Brown, 25, from Prestatyn, Wales, was driving near Meliden in Denbighshire on Monday afternoon when the plastic step fell from the vehicle and hurtled through her windscreen.

She was left with a broken nose after the step shattered the glass and hit her in the face on Dyserth Road at around 3pm. The lorry did not stop and police are trying to trace the driver. 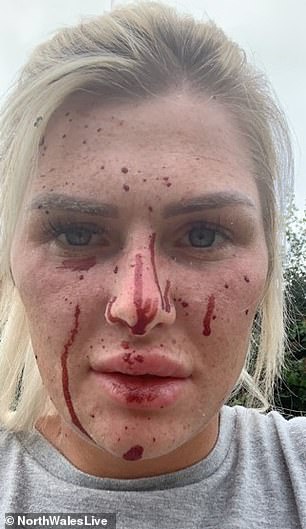 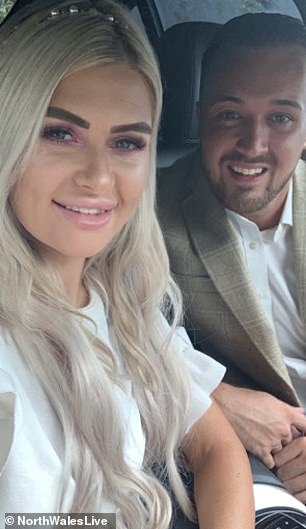 Dominique Brown (left, after the step hit her in the face and, right, with boyfriend Aaron Campbell) says she’s lucky to be alive after the step came crashing through her window 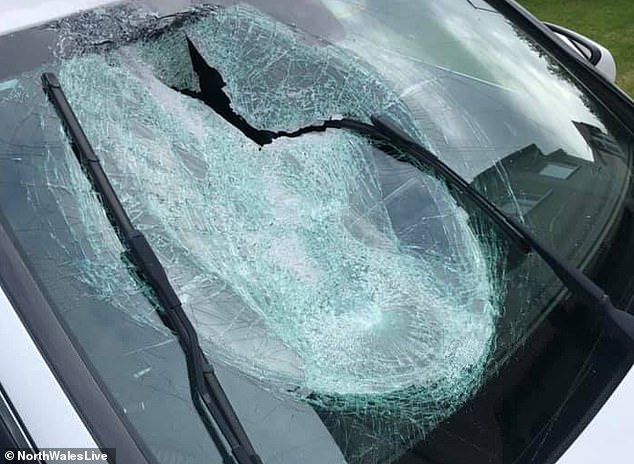 The step came crashing through this windscreen, smashing into Miss Brown’s face and breaking her nose

Miss Brown, who was in the car with her boyfriend Aaron Campbell, said: ‘We had just come home from holiday and we were driving to Denbigh so Aaron could get his hair cut.

‘The lorry was driving past and the step has flown off the side of it. It shattered the whole window. The wipers came through the window and the step hit me in the face.

‘I remember just driving along and, by the time I saw it, it was already hitting the windscreen.’

Miss Brown, a support worker, said she wasn’t sure whether she passed out as a result of the collision, but said the next thing she remembered was her boyfriend shouting to her to get out of the car. 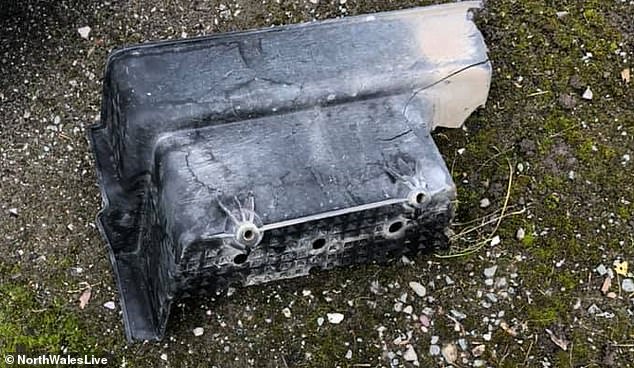 Pictured: The lorry cab step that smashed through the car and left Dominique Brown’s face spattered with blood

Mr Campbell, 28, from Prestatyn, was able to move his Mercedes C Class off the road before any other vehicles collided with it.

Miss Brown said: ‘The windscreen snapped the step in half and half of the step has come through the car and that is what has hit me.

‘I thought it was the air bag that had gone off. I didn’t know what it was. I don’t know if it knocked me out or not, but I remember my whole body was burning. 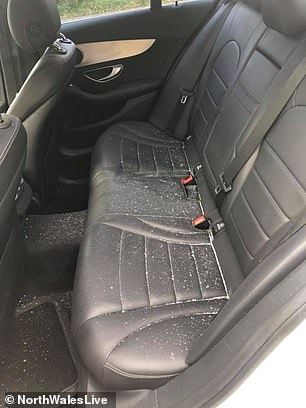 Miss Brown said a police officer arrived on the scene soon after the crash.

She said: ‘A policeman was driving towards us so he was there quickly and two other cars who were three cars behind stopped and called an ambulance for me.

‘The ambulance was going to be an hour so I took myself up to A&E and they said we were lucky to be alive.

‘They said it was lucky Aaron wasn’t driving because he is taller than me so they said it could have decapitated him if it hit him lower down.

‘It was also thick 4G glass. It would have taken both of our heads off if it was normal glass.

‘It’s mad to think that, if I was two seconds earlier or two seconds later, it might have missed or I might have ended up crashing into somebody else.

‘It was lucky nobody was behind us at the time because they would have smashed into the back of us. It wasn’t a great way to end our holiday.’ 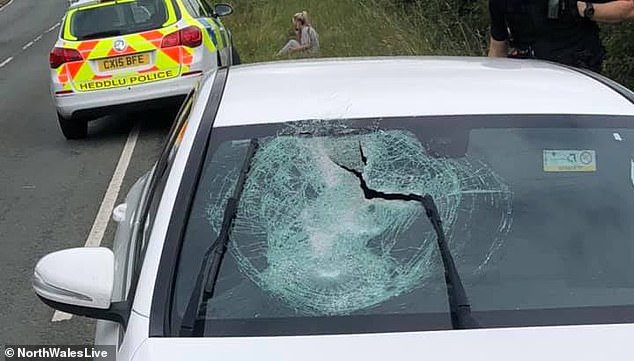 Pictured: Miss Brown sits next to the police care after leaving her vehicle, the window of which was smashed in by a lorry step

Miss Brown said: ‘The driver of the lorry must have realised something was happening because the three cars had stopped.

‘The police are looking at CCTV to see if they can find out who it was. It’s not the driver’s fault but the company they were driving for would be liable.

‘We need to know for our insurance because I have an excess of £1,400 which we are having to pay.’

Anyone with information or who witnessed the incident has been asked to get in touch with Aaron on Facebook.

A police spokesman confirmed they were called to the crash and believed a ‘plastic step ladder’ had come from the lorry and crashed into the windscreen, causing ‘facial injuries’.

I’ve stayed in enough city Airbnb apartments to understand how sliding, mirrored cupboard doors are meant to give the illusion...