MADISON, Wis. (AP) — Wisconsin liberals on Thursday filed a federal lawsuit alleging that Republican Sen. Ron Johnson and two other GOP congressmen are insurrectionists in violation of the U.S. Constitution for their words and actions in support of Donald Trump leading up to theriot at the U.S. Capitolon Jan. 6, 2021.

The lawsuit, alleging a violation of the “Disqualification Clause” of the 14th Amendment of the U.S. Constitution, says Johnson and U.S. Reps. Tom Tiffany and Scott Fitzgerald conspired to undermine President Joe Biden's victory and sow public distrust of the outcome.

That clause was enacted after the Civil War to prevent congressmen who had fought on the Confederate side from returning to Congress. It prohibits anyone from holding federal office who has taken an oath to protect the Constitution but has also “engaged in insurrection” against the United States or “given aid or comfort” to its enemies.

It's unclear what would happen if a court ruled that a sitting member of Congress had violated the amendment. The lawsuit doesn’t seek a specific remedy, but in a statement announcing its filing, the plaintiffs said the men “are no longer qualified” to seek reelection.

Biden beat Trump by just under 21,000 votes in Wisconsin, an outcome that has withstood multiple lawsuits, recounts and reviews. Republicans who control the state Legislature have rejected calls from Trump and his backers to decertify Biden's win, a move that nonpartisan attorneys have said would be illegal. 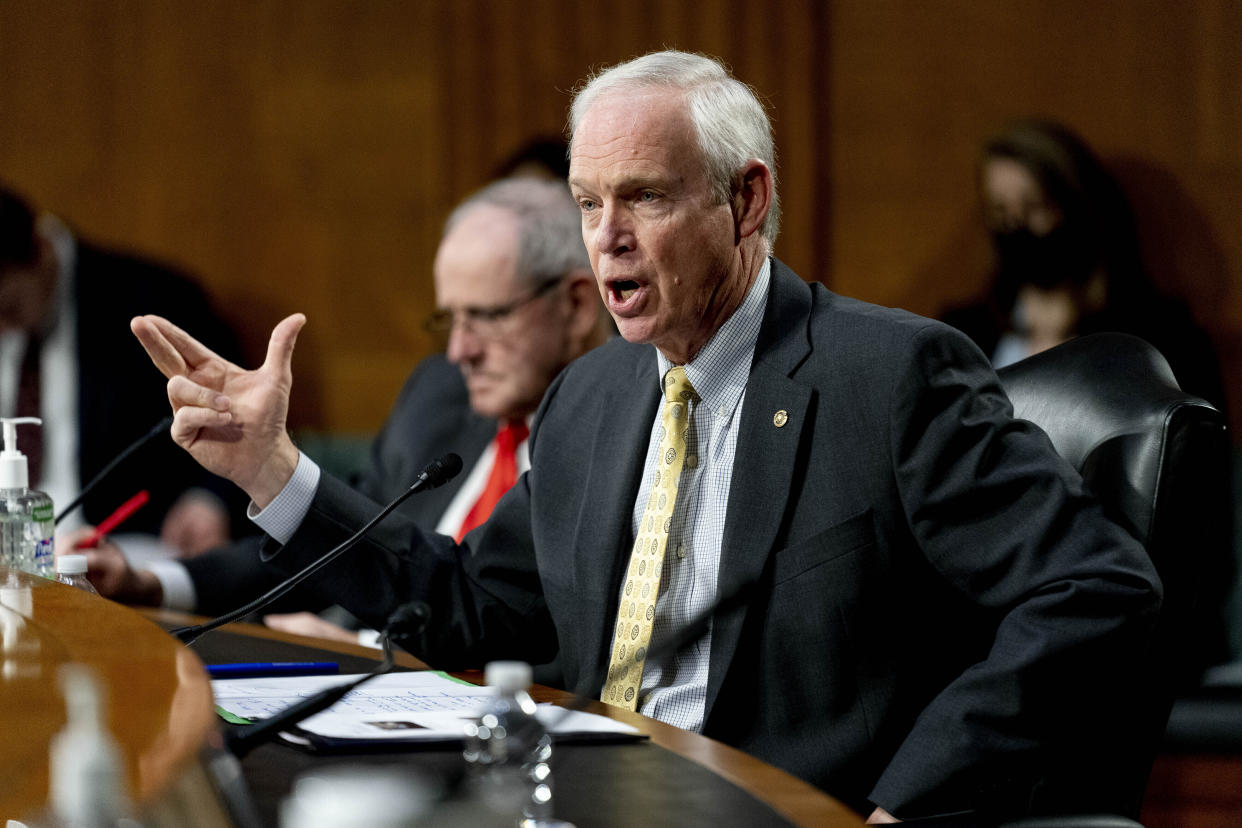 Johnson, Tiffany and Fitzgerald did not immediately return messages sent to their spokespeople seeking reaction to the lawsuit filed in federal court in Milwaukee.

Johnson was one of eight U.S. senators who signed an objection to counting Arizona’s electors, but he ultimately voted to accept them after the riot on the Capitol.

The lawsuit accuses the three Republicans of being part of a conspiracy theory and “spreading their malicious falsehoods about a ‘rigged election’ through regular and social media and at public appearances.” It also notes Fitzgerald’s role in reserving a room at the Wisconsin state Capitol for fake Republican electorsto meet on Dec. 14, 2020, and cast their ballots for Trump, even though Biden had won the state and his electors were meeting that same day elsewhere in the building.

“The falsehoods of Johnson, Fitzgerald, and Tiffany about the integrity of Wisconsin’s election procedures began even before citizens were allowed to cast their ballots in the 2020 Presidential Election and continued long after their lies were disproven,” the lawsuit said. “The Defendants, along with hundreds or even thousands of President Trump’s surrogates, and most prominently President Trump himself, repeatedly proclaimed lies about the election and its results, and those lies increased in frequency and intensity as January 6, 2021 approached.”

The lawsuit was filed by 10 Wisconsin citizens and funded by the liberal Minocqua Brewing Company Super PAC.

It is similar to one rejected by a federal judge last week seeking to keep U.S. Rep. Madison Cawthorn, of North Carolina from seeking reelection this fall.

The case against Cawthorn alleged he wasn't eligible for the ballot because of his involvement in the rally that preceded the riot on the Capitol. A federal judge in Washington ruled on March 4 that North Carolina's candidate challenge process didn’t apply to the 14th Amendment's “Disqualification Clause.”

Cawthorn, a fervent backer of Trump who voted against certifying Biden’s presidential victory, says he’s never participated in an insurrection against the U.S., and the amendment didn’t apply to him.

KHLOE Kardashian has gone topless and shows off her thin frame in a throwback photo birthday post. While being praised...