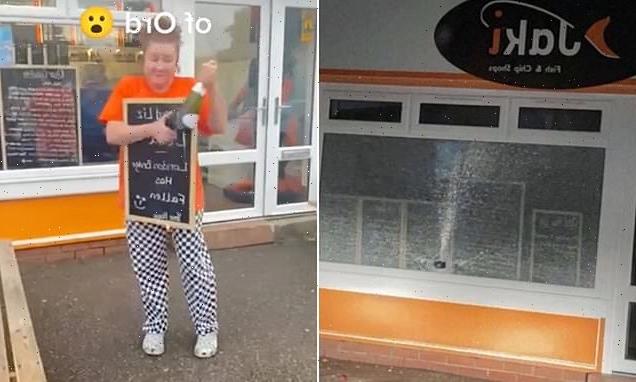 A fish and chip shop owner who celebrated the Queen’s death with a bottle of champagne, shouting ‘Lizard Liz is dead’ has had her restaurant windows smashed in.

A photo of the vandalism was shared to Twitter on Saturday night showing the front of the shop with a shattered window and a hole in the middle.

Angry locals also vandalised the property on Thursday evening when they pelted the store front with eggs and ketchup.

Jaki Pickett, who runs Jaki’s Fish and Chip Shop in Muir of Ord, Highlands in Scotland held up a chalkboard that read ‘London Bridge has fallen’ with a smiley face.

She posted the now-deleted clip of her happily celebrating the Queen’s death on Facebook, but it caused huge outrage with locals who blasted Ms Pickett for disrespecting the late monarch. 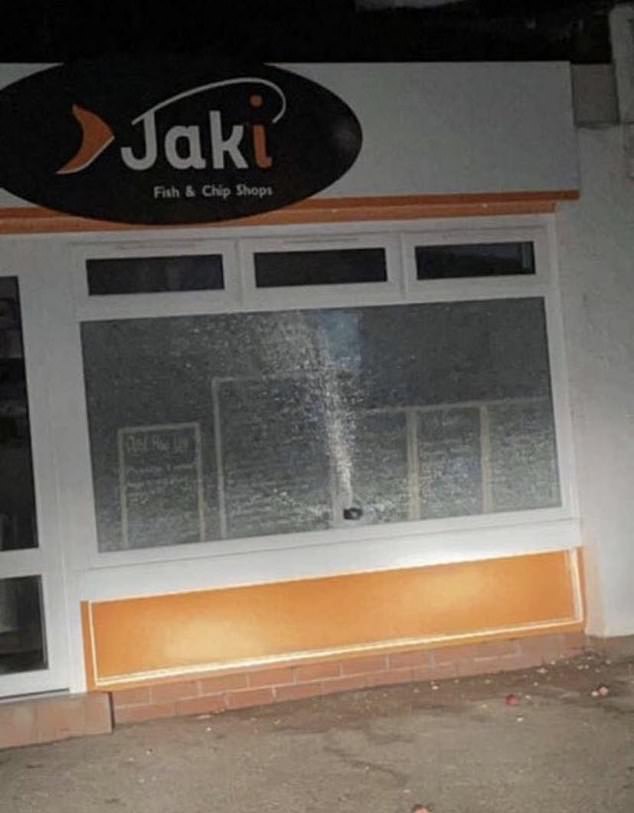 The news of the latest vandalism was shared on Twitter, with a photo of the damage captioned: ‘Jaki’s chip shop smashed up again’.

Twitter users reacted, largely condemning the destruction, saying: ‘What she did was despicable but it doesn’t condone violence and death threats’.

A Police Scotland spokesperson said: ‘Officers received a report of damage to a property in the Seaforth Road area of Muir of Ord, which is thought to have happened between 7.30pm on Friday, 9 September, and 10.30am on Saturday, 10 September, 2022.

‘Enquiries are ongoing to establish the circumstances.’

Police Scotland were also called to the shop on Thursday evening after it was targeted by angry residents in Muir of Ord who egged the windows.

Pictures showed broken eggshells on the ground and egg mess over the shop windows, while ketchup was splattered on a bench. 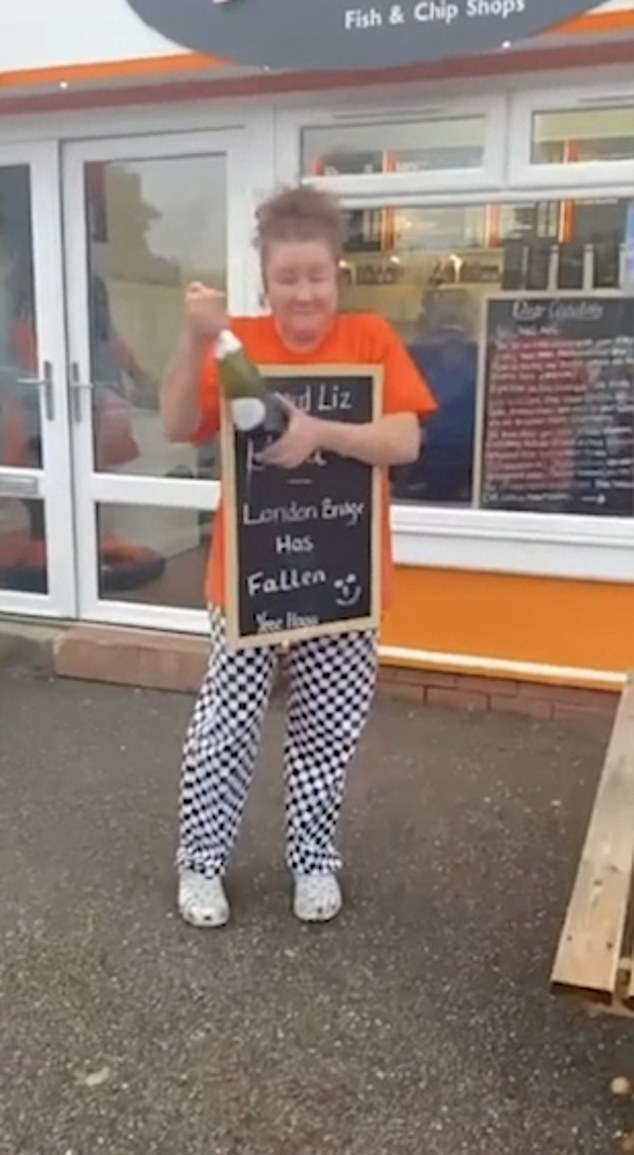 Jaki Fish and Chip Shop, in Muir of Ord, was targeted after owner Jacki Pickett (pictured) shared a clip of her popping and spraying champagne shortly after Her Majesty’s passing 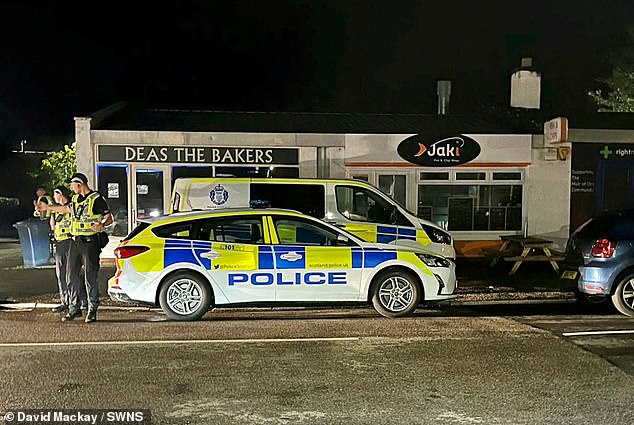 Police surrounded the fish and chip shop Muir of Ord, Highlands in Scotland, after she held up a chalkboard that read ‘London Bridge has fallen’ with a smiley face, causing uproar with residents in the local area

Videos circulating on social media show residents surrounding the restaurant on Thursday evening, where owner Ms Pickett was seen driving away from the area with a police escort while locals booed her for her shameless Facebook post.

A Police Scotland spokesperson said: ‘Shortly after 8.30pm on Thursday, 8 September officers attended at a business in the Seaforth Road area of Muir of Ord following a report of a large crowd gathered in the area.

‘Officers remained at the scene to ensure the safety of all present and the group subsequently dispersed peacefully.

‘No further police action has been required.’

David Mackay, 27, from Muir of Ord said he was angered by the post. He said: ‘The comments on her Facebook page were disgusted and against her, quite rightly so.

‘I heard that large crowds headed down to the chip shop and were protesting outside. 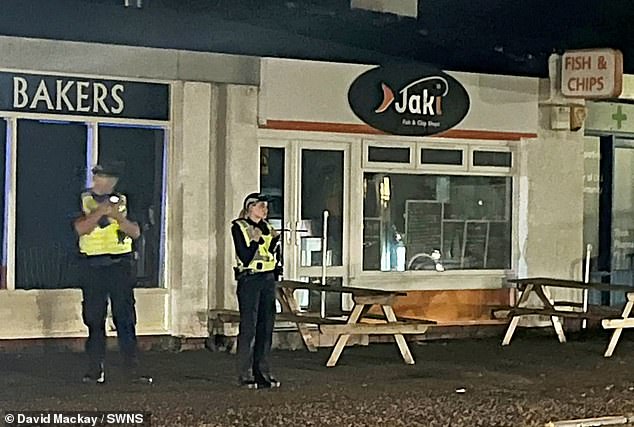 Videos circulating on social media show residents surrounding the restaurant on Thursday evening, where owner Ms Pickett was seen driving away from the area with a police escort while locals booed her for her shameless Facebook post (police pictured at the scene)

‘Some threw eggs at her window, some squirted tomato ketchup over the windows.

‘I drove down myself to go and see what had happened and the streets were packed and the police were there.

‘Then, Jaki, the owner of the chip shop and the lady in the video, was driving away with a police escort and her car was pelted with rocks and other objects.

‘The police stayed for a while longer incase there was any further vandalism to the shop, but there wasn’t.

‘It made me feel angry. It’s given Muir of Ord a bad reputation.

‘Some English people might think that we are all laughing and celebrating about the queen dying but that is not the case at all.

‘At the end of the day, I’m not a die hard royalist myself but the Queen is an inspiration for many people.

‘So many people take warmth and comfort from her Christmas speeches, myself included. You don’t have to be a royalist to realise and understand that it’s still the death of a 96 year old woman, who has done so much for the country.’

Ms Pickett’s membership to the National Federation of Fish Friers has also been revoked. 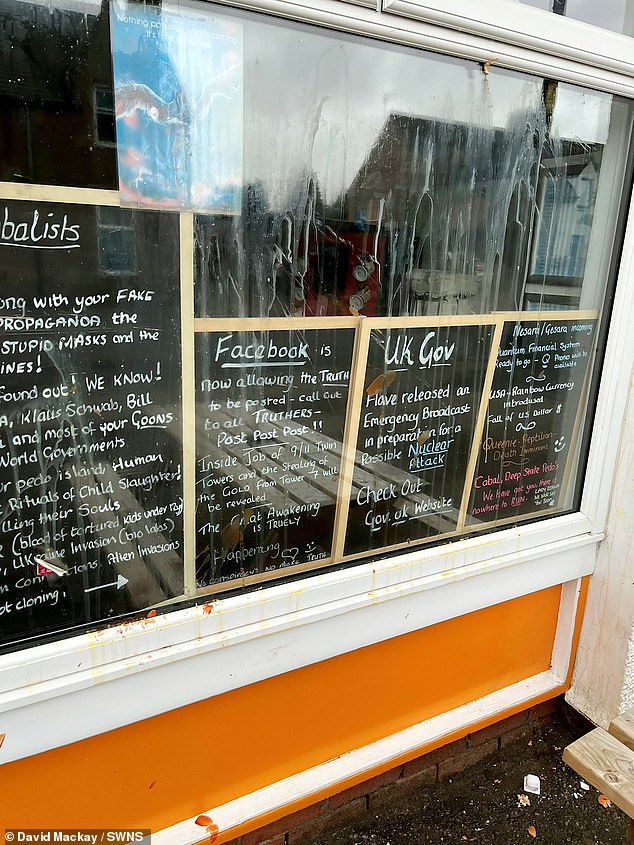 In a statement, the NFFF said: ‘The NFFF has been made aware of social media posts made by one of our members that are in extremely bad taste and completely against all of the values our organisation and industry hold dear.

‘We have discussed this as a board and have taken the decision to revoke the membership of this business owner and we will be writing to them and asking them to remove all association of the NFFF from her business, social media and websites.’

Seven officers were called to the shop on Thursday evening, a police spokesperson confirmed to The Press and Journal.

Although video emerged of Ms Pickett allegedly driving away from the shop after having consumed Champagne hours prior, police say there is ‘no suggestion that a crime was committed.’

However, she has been slammed in the court of public opinion as social media users have issued aired their disgust towards her actions.

‘You do not belong to us, we want you to leave,’ one person wrote.

‘I hope you’re out of business and run out of the Muir in the month,’ echoed another.

‘Highlanders, by which I mean proper true Highlanders, not just by birth, but the people who chose to live here are decent gentle folk, respectful of others.’ 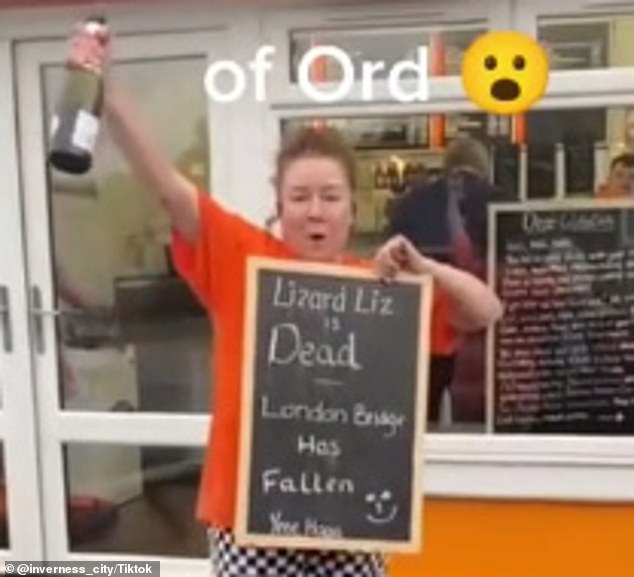 She also held up a chalkboard sign reading: ‘Lizard Liz Dead and London Bridge has fallen’ 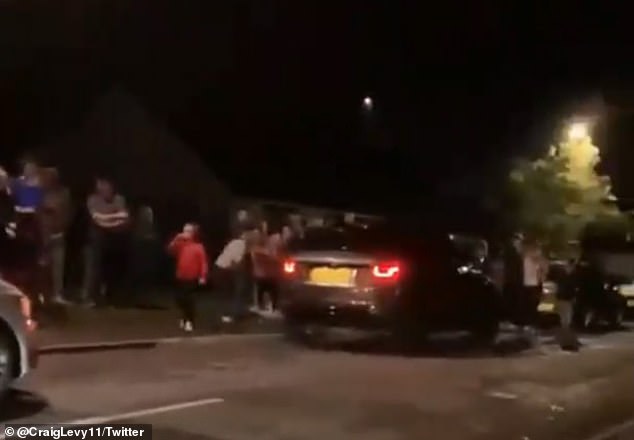 Enraged Brits pelted eggs at the shop following her posting of the video. A large group also gathered outside the business in protest as they booed and berrated Ms Pickett

Ms Pickett appears to have deleted the video from Facebook, but that has not stopped angry residents from issuing poor reviews of the restaurant online.

Alan Hassan echoed: ‘Not one ounce of respect for anyone or anything except herself. I will never step foot back in your shop again.’ 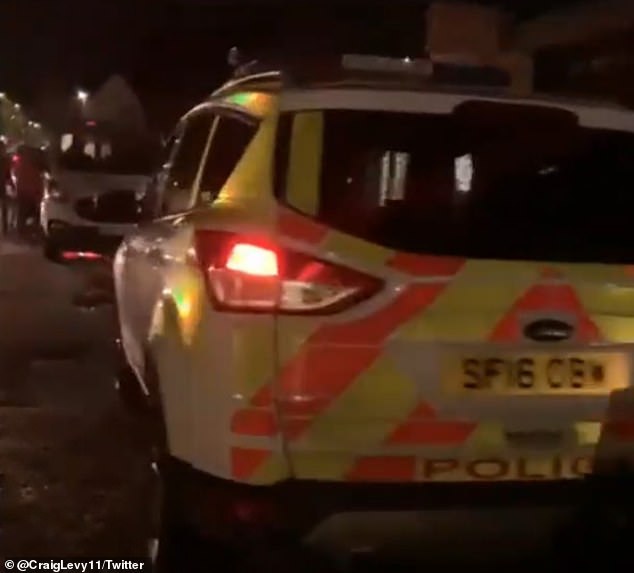 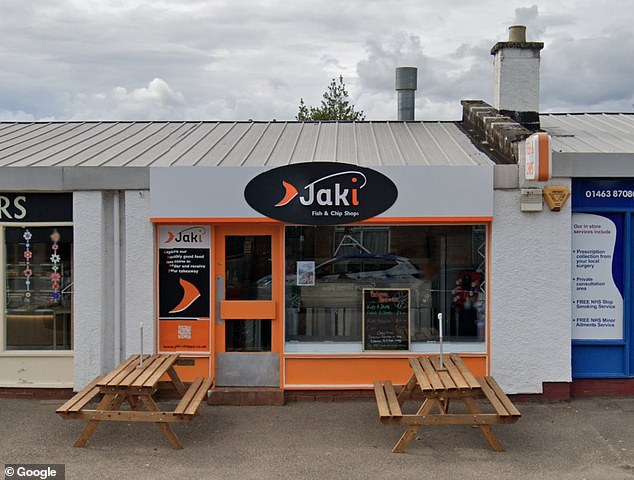 Ms Pickett appears to have deleted the video from Facebook, but that has not stopped angry residents from issuing poor reviews of the restaurant online