Pregnant wife who tried to pay her husband’s rape accuser £3,000 in hush money to drop claim is spared jail along with her husband and his ‘victim’ after police rumbled the trio 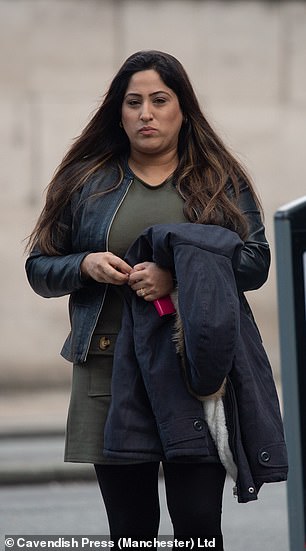 Amina Bhatti, 36, who was pregnant with their first child together, arriving at Manchester Crown Court

A wife agreed to pay £3,000 to a woman who had accused her husband of raping her so she would withdraw the allegation, a court heard.

The alleged victim, 31, accused Kamram Nazir, 33, of Levenshulme, Manchester, of attacking her after they met at a nightclub in the city.

His wife Amina Bhatti, 36, who was pregnant with their first child together, later discovered that he had been accused of rape and decided to offer the woman hush money.

But after Bhatti’s plot to pay the woman was discovered by  detectives, all three were charged with conspiracy to pervert the course of justice.

They trio were all spared jail at Manchester Crown Court today and handed suspended sentences.

The court was told that prosecutors cannot say whether the rape allegation is true or false.

Judge Elizabeth Nicholls told them: ‘Listening to the facts of this case you could have been forgiven for thinking you’d escaped into a Shakespearean tragedy.

‘All the elements are there, the wife trying to protect her husband, the plan that was doomed to fail, and the elements of lust and greed.

‘But from this fiction arrives the fact of the offence of perverting the course of justice for which you all must be sentenced.’

A hearing heard that in July 2015 a taxi driver was called to Nazir’s home and picked up Nazir and and the woman.

When Nazir got out to withdraw money from a cash machine, she told the driver she had ‘no idea how she had got there’ and ‘I don’t know how this has happened.’ 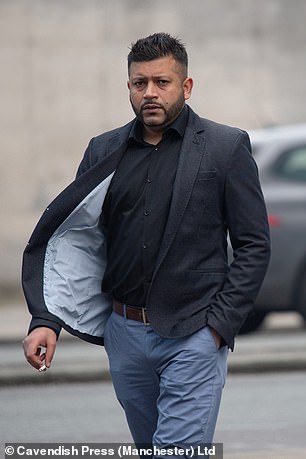 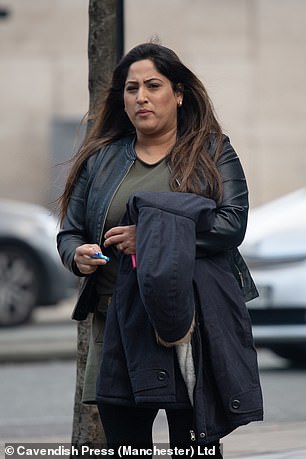 Kamram Nazir (left, arriving at court) of Levenshulme, Manchester, was accused of attacking the woman after they met at a nightclub in the city. His wife (right, outside court) later discovered that he had been accused of rape and decided to offer the woman hush money

She told the driver that she had woken up and found Nazir ‘on top of her’ having sex at his home.

She reported it to police, and Nazir was arrested, telling officers the sex had been consensual.

Bhatti, who then lived in Bradford while Nazir lived in Manchester, discovered he had been arrested, but he claimed he was held for fighting in a nightclub.

After searching his phone she rang the woman’s number, who told her that Nazir had raped her.

They met at Bradford Royal Infirmary and the pair agreed that Bhatti would pay her £3,000 if she dropped the allegations against her husband.

Later they agreed to meet up again, this time in Bradford city centre, where Bhatti handed over £1,000. 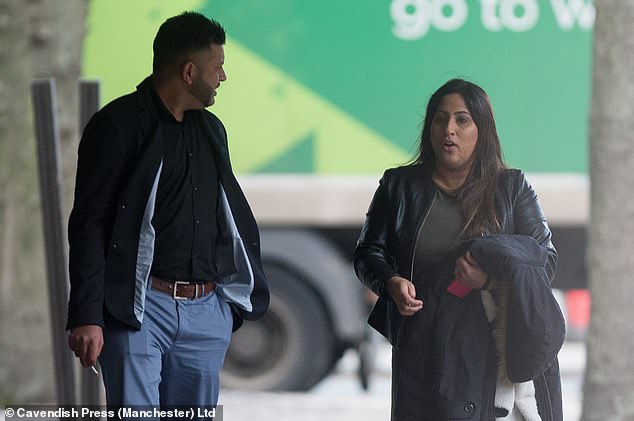 The couple, arriving at Manchester Crown Court, were each handed suspended sentences today for perverting the course of justice

The court heard the woman became ‘angry’ when she realised she was only receiving £1,000.

Bhatti told her she would hand over the rest of the money when Nazir had received his possessions back from the police after the allegations had been dropped.

But Bhatti later said she never had any intention of paying any more money.

On another occasion the woman and Bhatti met at a hostel, and the alleged victim said she had used the £1,000 to pay off debts.

Prosecuting, Andrew Macintosh said the woman ‘berated’ Nazir about the way he had treated his wife, and ‘professed friendship’ with her.

The woman told Bhatti that she was homeless and needed money to get to London to see her family. Bhatti tried to avoid her, but she continue to contact her by text, phone and WhatsApp.

To formally retract her statement the woman had to go to Manchester to meet with police.

Bhatti went with her and made a recording of the journey on her phone, in which they can be hear to be ‘chatting’ and singing along to music, the court heard.

After seeing a letter confirming her retraction, Bhatti went to a cash machine and handed over another £500 to the woman and told her there was no more money.

But she said she wanted more money and said Bhatti hadn’t stuck to their deal. Messages between the pair continued, and Bhatti lied about being in hospital to try and avoid her.

Despite the woman withdrawing her allegation of rape, police continued investigating.

The woman was then interviewed again and claimed she had been ‘threatened’ by Nazir and Bhatti.

Bhatti was arrested later. All three of their phones were seized, which led to charges of conspiring to pervert the course of justice being brought against the trio.

One text from Bhatti to the woman said: ‘Sister we need to talk. When the officer rings I will tell them you came to me and you said you would give me money – I think maybe you don’t trust me but I’m not bothered by anything.

‘He did what he did and I’m doing this for your baby. I will say I was forced to retract my statement, we might share the same police cell together. ‘

The rape inquiry against Nazir was subsequently dropped.

They all plead guilty of perverting the course of justice before any trial.

At the time of the allegation the woman’s marriage had broken down making her homeless, and she had recently lost her father making her ‘vulnerable’ her lawyer said.

Judge Nicholls told Nazir: ‘On July 31st you embarked on a course of action which would change the course of all three of your lives.

‘Put bluntly you are the cause of this problem.

‘The only reason you stand in the dock is because of your ridiculous conduct on that night.’

However she added he had been a ‘reluctant participant’ and had tried to stop contact and any further money being paid to the woman by his wife.

He was handed a 14 month jail term, suspended for 18 months and he must carry out 120 hours of unpaid work.

Judge Nicholls said she ‘could not and would not’ make a judgement on the truth of the rape allegation.

She told the alleged victim: ‘Your actions could have done untold harm to genuine rape victims who have to appear before juries, but I do not sentence you on that basis.’

She given a 20 month jail term, suspended for two years, and she must carry 30 days of rehabilitation with the probation service.

Bhatti, who has three young children, was given a 10-month prison sentence suspended for 18 months and must also do the 30 days rehabilitation activity requirement.

Judge Nicholls told her: ‘I accept your motivation was driven by jealousy and not a criminal, although the consequences of that became criminal.

‘Your instinct was to protect your husband, your marriage and your unborn child.’