The American union movement has split over President Joe Biden’s proposal for companies with more than 100 employees to vaccinate their workforces against COVID-19.

With increasing numbers of employers mandating COVID-19 vaccination, will something similar play out in Australia? 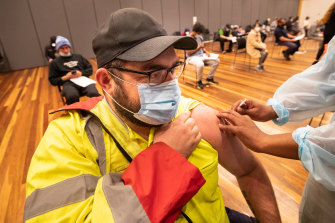 A man rolls up his sleeve to get jabbed at a vaccine clinic in Hoppers Crossing.Credit:Jason South

Despite a push for mandatory workforce vaccination by some union members, the Australian trade union movement has been remarkably cohesive in opposing employer mandates.

Four interlocking principles underpin this position. They are:

In a joint statement with the Business Council of Australia opposing employer mandates, the Australian Council of Trade Unions said: “[…] for the overwhelming majority of Australians your work or workplace should not fundamentally alter the voluntary nature of vaccination.”

This emphasis on choice aligns with international labour standards on workplace immunisation as well as the federal government’s policy of COVID-19 vaccination being free and voluntary.

It also recognises the invasive nature of vaccinations and the fact that employer mandates involve compulsion. In some cases, this would mean risking workers’ jobs and livelihoods.

However, it does not mean being agnostic about vaccination. On the contrary, ACTU Secretary Sally McManus has acknowledged high vaccination rates are necessary for workplace and community safety and for avoiding lockdowns.

The ACTU recently launched a national vaccination campaign to encourage workers to be vaccinated. It has also advocated for effective access to vaccination (including paid vaccine leave). 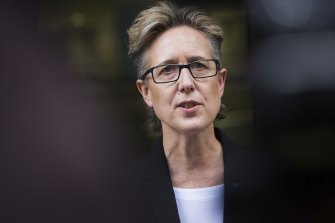 This approach aligns with the World Health Organisation, which does not support vaccine mandates. Instead, the WHO argues for a focus on information campaigns and making vaccines accessible.

Encouragement and facilitation do not guarantee workforces are 100 per cent vaccinated (in the short term). But they may have more enduring public health benefits than forcing vaccination.

Discussing and encouraging vaccination can be effective in overcoming vaccine hesitancy. For instance, meetings of the health sector union have resulted in many initially reticent members deciding to be vaccinated.

The ACTU’s focus on “uniting” people to get behind vaccination, highlighting how vaccination is “an act of solidarity”, touches on something deeply important. Both Pope Francis and the WHO director-general have emphasised that solidarity – a mindset that thinks in terms of community – is vital in the pandemic.

The BCA-ACTU statement calls on governments to “ensure that where mandatory vaccination requirements are necessary (in a small number of high-risk places), they are implemented through the use of nationally consistent public health orders”.

As the statement recognises, mandating vaccinations involves “serious decisions that should not be left to individual employers”. Any decision to limit fundamental rights is best done through accountable public institutions, rather than private entities motivated by commercial considerations.

Public health orders also give the community confidence that such decisions have been informed by expert advice, and various stakeholders have had a chance to be heard (as employer groups and unions have had with the federal vaccine rollout).

With the difficulties plaguing the vaccine rollout, a key focus of unions has been on vaccine supply, particularly for front-line health workers. The ACTU and the nursing and health sector unions have also highlighted the inequity of employer mandates when there are acute vaccine supply issues, as with aged care and disability workers. 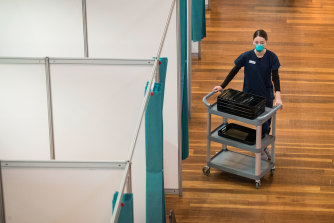 A nurse at the Royal Exhibition Building vaccination hub.Credit:Getty Images

Unions have called for all workers to be given paid vaccination leave (to be vaccinated and recover from its side effects). This would ensure workers are not deterred from being vaccinated because of a loss of pay. It’s particularly important for those in low-paid and precarious work (including casual employees who do not have paid annual and sick leave).

The ACTU as well as transport, manufacturing and tertiary education unions have insisted workers be consulted on employer vaccination policies.

At stake is the fundamental principle of worker voice. This principle is integral to the right of workers, as recognised in the International Labour Organisation’s 1944 Declaration of Philadelphia, to: pursue both their material well-being and their spiritual development in conditions of freedom and dignity.

Worker voice is also central to workplace health and safety legislation, which requires consultation with workers and trade unions on employer vaccination policies. The underlying insight is that worker education and empowerment are key to workplace safety.

Respecting worker voice is also essential to the collaborative approach to workplace vaccination urged by the federal government and the Fair Work Ombudsman. As the International Labour Organisation has pointed out, such collaboration helps build a climate of trust essential for the unprecedented workplace adjustments occurring in the pandemic.

We see in the unions’ opposition to employer-mandated vaccinations a framework of principles that places public health as its centre, together with respect for bodily autonomy, workers’ rights, fairness and democracy.

This approach may prove to be more far-sighted than employer mandates.

Joo-Cheong Tham is a Professor at Melbourne Law School, The University of Melbourne.

This article is republished from The Conversation.