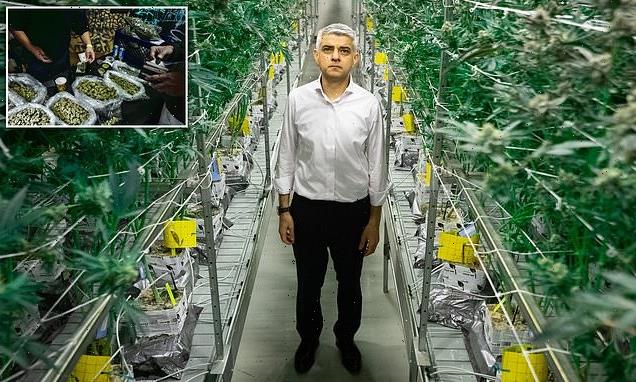 A potty plan: As Sadiq Khan visits US cannabis factory, why does he want to legalise marijuana in London after the catastrophe it’s already unleashed in America, asks TOM LEONARD

As Sadiq Khan posed for pictures, standing between rows of plants at a licensed cannabis business in Los Angeles this week, Londoners can only hope their mayor resisted any temptation to sample the product.

The drug’s mood-altering and hallucinogenic effects are well known – and Khan has already shown he’s amenable to ending Britain’s ban on marijuana.

Despite going to LA on a ‘fact-finding’ mission to learn how the city had fared since recreational marijuana became legal in California in 2018, there were signs the Labour politician was looking to be impressed.

For while the ownership, management and staffing of America’s multi-billion-dollar legal marijuana industry is 98 per cent white – prompting many African-Americans to complain they are being excluded from the pot ‘gold rush’ – Khan visited one of the handful of black-run businesses that has managed to thrive.

At the Gorilla Rx Wellness cannabis dispensary, he heard good news about how legalisation can empower black people.

That’s exactly what the young voters probably want to hear, as polls show they are in favour of marijuana legalisation in general.

But if Khan is envisaging similar businesses springing up in London, there is another side of the trade that he should take into account.

Had the mayor looked a little further afield, he would have found a very different story –as I did when I recently visited LA following reports that, far from flourishing, its legal cannabis industry is on its knees. 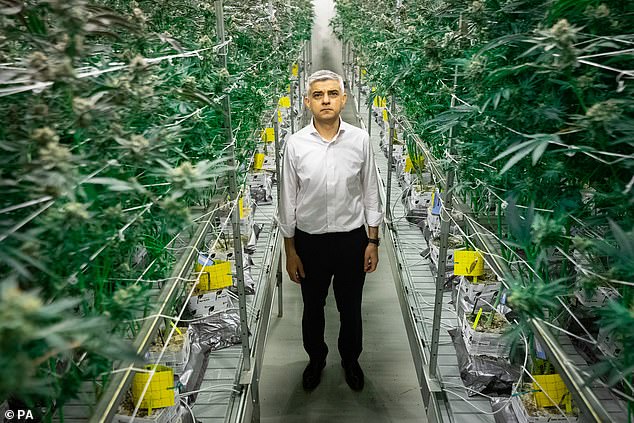 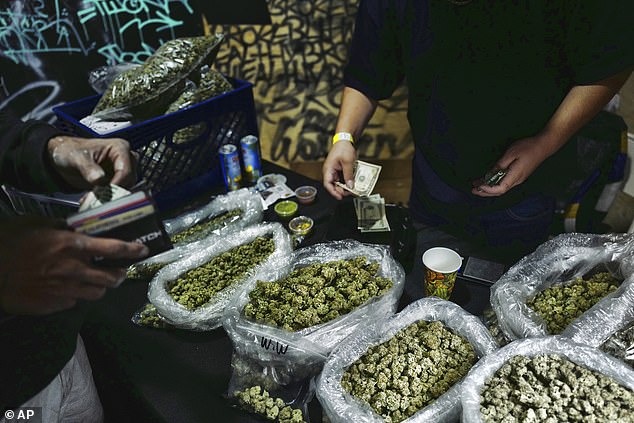 A vendor makes change for a marijuana customer at a cannabis marketplace in Los Angeles, where recreational marijuana became legal in 2018

At The Higher Path, a cannabis shop in the affluent suburb of Sherman Oaks, customers sit in a waiting room festooned with potted plants while staff check your ID to ensure you are 21 and haven’t reached your daily one-ounce cannabis purchasing limit.

You are then buzzed through a steel door by an armed security guard into an Aladdin’s Cave of cannabis products: cannabis-laced soft drinks, ‘tinctures’, chocolate, chewy sweets, vapes and the dried plant itself.

As a business it looks impressive, and yet its owner, Jerred Kiloh, told me he was struggling to stay afloat, along with the rest of the city’s licensed pot trade.

For these legal traders are surrounded – and heavily outnumbered – by unlicensed and illegal cannabis dispensaries that sell almost identical-looking products at half the price. The same goes for an army of cannabis delivery services.

They don’t sell authorised cannabis made by California’s tightly controlled and heavily taxed 8,000 licensed growers, but untaxed and untested pot that may contain harmful additives or be dangerously potent.

Additives have been found to include a pesticide, Eagle 20, that releases highly toxic formaldehyde and mustard gas when heated.

Checks on buyers’ IDs and ages are perfunctory or non-existent while the supposedly tamper-proof packaging and clear labelling of the cannabis products – including a government health warning – is either missing or counterfeit.

Occasionally, police raid these dispensaries, but brazen owners re-open them within days.

This largely unchecked black-market activity has brought the legal cannabis industry to the brink of collapse.

Mr Kiloh, head of the United Cannabis Business Association, predicts half of the state’s 823 legal pot shops will have closed within a year.

Most are surviving only by selling some of their cannabis on the black market. 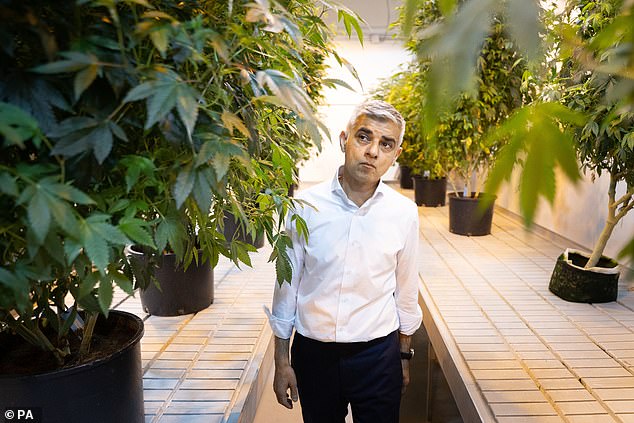 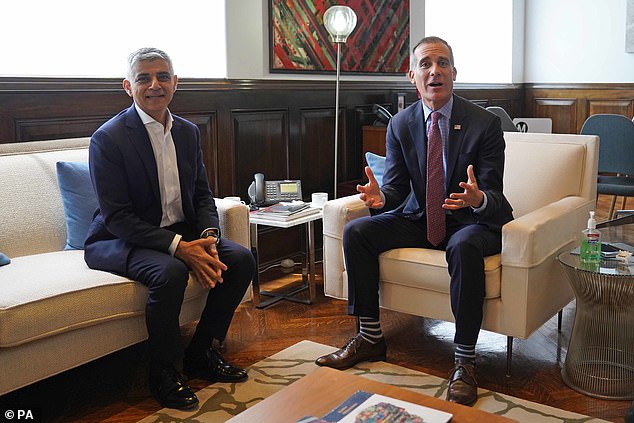 ‘Nobody is making money anywhere in the legal supply chain,’ Mr Kiloh told me.

He blames the state’s legalisation law, which taxes marijuana so heavily that the price of an eighth of marijuana doubled virtually overnight from $30 (£24) to $60 (£49). Naturally, many customers continued to buy it illegally for half the price.

And the mess in California is being repeated in other states such as Oklahoma, Washington and Michigan, which have also legalised the drug.

While 18 states have allowed marijuana for recreational use, usually after convincing voters it will be a huge tax earner, California remains the world’s biggest single recreational marijuana market, worth some £11.5billion a year, including the legal and illegal drug.

One of the justifications for legalisation was that it would benefit black people, who have suffered most from it being criminalised.

However, African-American cannabis entrepreneurs have been among those hit hardest, many complaining that they’ve lost all their money trying to run a legal business.

Contrary to the airy platitudes of proponents in both the UK and US about legalisation driving down crime, drug criminals are thriving.

Californians were assured that legalising dope would ‘incapacitate the black market’. In fact, it has invigorated it.

Drug cartels had before stayed out of California’s illicit marijuana trade as the drug was too cheap and had too many suppliers.

But now that legal cannabis is relatively expensive, the ruthless gangs see the potential to make a fortune.

Cannabis-related violent crime has soared. During a single spree over one weekend last November, armed robbers raided 25 licensed dispensaries in Oakland, near San Francisco, stealing large amounts of marijuana and shooting at staff and police.

And yet, because Left-wing state prosecutors have changed the law to make cultivating illegal marijuana a less serious crime, offenders can expect to be let off with no more than a $1,000 (£820) fine.

Cannabis businesses complain that the police usually aren’t interested in making arrests. Complicating the nightmare, most consumers say they don’t know the difference between what’s legal and illegal.

The scale of the disaster may not have yet filtered through to the mayor of London, but the cannabis crisis in California should give pause for thought.

America’s thriving pot black market is not the only lesson that the mayor can take home.

Another worrying misconception is that cannabis is essentially harmless or even – based on evidence of its usefulness as a painkiller – benign.

Some US doctors were always worried the country had moved too fast in legalising cannabis when little was known about its health effects. 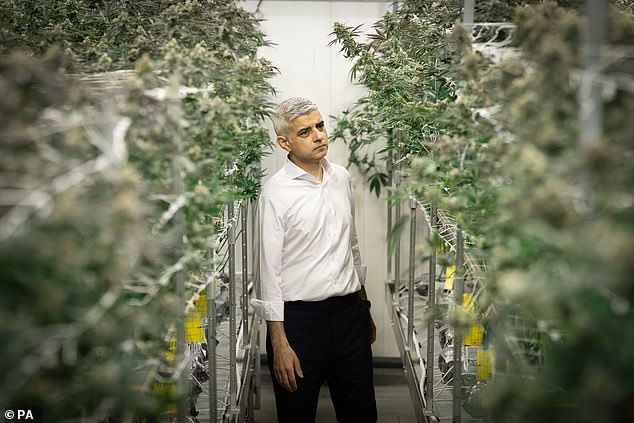 Mr Khan has visited New York and Silicon Valley, California, before he made his way to Los Angeles and hopes to use the trip to attract investment to the capital

Those fears have only grown: experts are increasingly alarmed about the drug’s links with mental health problems, with possible damage to brain development in young users and evidence that using it vastly increases the risk of developing schizophrenia and other mental disorders.

It’s also thought to be responsible for an alarming condition known as cannabinoid hyperemesis syndrome (CHS) or ‘scromiting’, a gastrointestinal illness in which victims start vomiting uncontrollably.

Studies suggest up to 12.5 per cent of the US’s regular cannabis users suffer from it.

And despite the pro-cannabis lobby’s insistence that the drug isn’t addictive, the number of Americans describing their heavy use of it as a ‘disorder’ has doubled since the early 2000s, says to the US’s National Institutes of Health.

Health experts are worried about the increasingly potent cannabis variants that are available.

In January, Sir Robin Murray, of King’s College London, said ‘the increased potency of cannabis means it is no longer a relatively safe drug’.

He said that the growing strength of ultra-potent forms of the drug called ‘skunk’ – which dominates the UK market and which is still half the strength of many variants on sale in California dispensaries – was responsible for the UK having ‘among the highest rates of psychosis in Europe’.

He also warned parents underestimate the mental health risks posed by ultra-strong cannabis, revealing that skunk causes a third of the psychosis cases he sees at his south London practice.

Sir Robin noted that in the US states that have legalised cannabis, the price has fallen, potency has shot up and ‘both cannabis use and addiction have increased’.

Sadiq Khan will hopefully have seen that if even California, birthplace of the hippie utopia, cannot make legal pot work, there may need to be another solution to Britain’s drug problem.

The capital is in total gridlock, crime is out of control… yet the Labour mayor is posing in an LA cannabis factory

By Claire Ellicott, Political Correspondent for The Daily Mail

Priti Patel yesterday slapped down London mayor Sadiq Khan after he announced a ‘commission’ to look at decriminalising cannabis in Britain.

The Home Secretary pointed out that Mr Khan has ‘no power’ to legalise illicit substances, and said his time would be ‘better spent’ focusing on tackling drug and knife crime in the capital.

It came after the mayor praised the ‘high standards’ of legalised cannabis farms in California during a taxpayer-funded US tour.

He also said he was launching a new London Drugs Commission, headed by former justice secretary Lord Falconer QC, to consider the decriminalisation of the class B drug in Britain.

The body will examine research from University College London, but will not look at changing the law on class A drugs.

Mr Khan said an ‘honest, open’ conversation was needed about UK cannabis laws and he hopes the panel will look at ‘what happens elsewhere in the world where the laws have been changed’.

But Miss Patel said: ‘Sadiq Khan’s time would be better spent focusing on knife and drug crime in London. 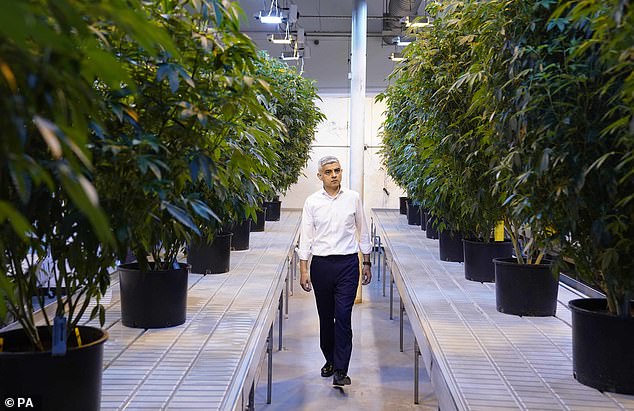 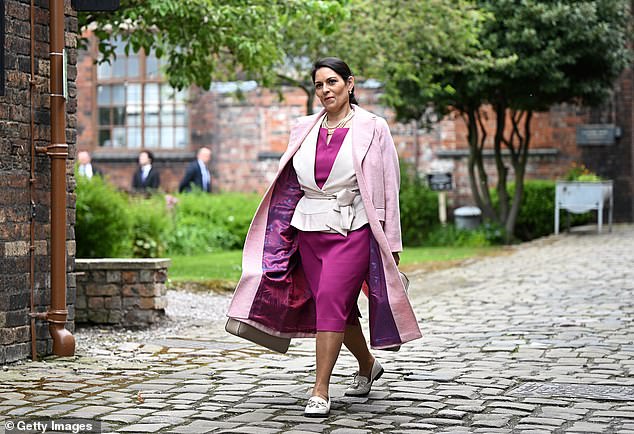 The mayor has no powers to legalise drugs. They ruin communities, tear apart families and destroy lives.’

During his four-day tour to the US, billed as a ‘fact-finding mission’, Mr Khan visited a Los Angeles cannabis dispensary and farm as well as a shop that sold products infused with the drug.

Describing the farm as ‘heavily regulated’, he said: ‘It’s important to see for ourselves what the parallel world of legalised cannabis looks like as a compare and contrast.’

He added: ‘Hearing from those who cultivate and grow this plant has been fascinating.’

Once the commission has completed its work, it will make recommendations to London’s City Hall, the Government, the police, and public health services.

Labour distanced itself from the plans, with a spokesman saying the party ‘does not support changing the law on drugs’.

About 2.6million people in the UK used cannabis in the year to March 2020, according to the Office for National Statistics, and the main drug offence recorded in England and Wales last year was ‘possession of cannabis’,

Mr Khan’s spokesman said the mayor’s flights were provided free by United Airlines, adding: ‘The mayor is committed to keeping the costs of the visit to a bare minimum and maximising value for money.’