An anonymous letter exposing an alleged fraud at the National Australia Bank came as a shock to a senior bank investigator in the days before Christmas 2017, a Sydney court has heard.

Michael Griffiths, then manager of major crime investigations at NAB, told Sydney’s Downing Centre District Court on Tuesday the letter was “extremely unwelcome … from my point of view” when it was forwarded to him on December 6, 2017, by a member of the bank’s whistleblower program. 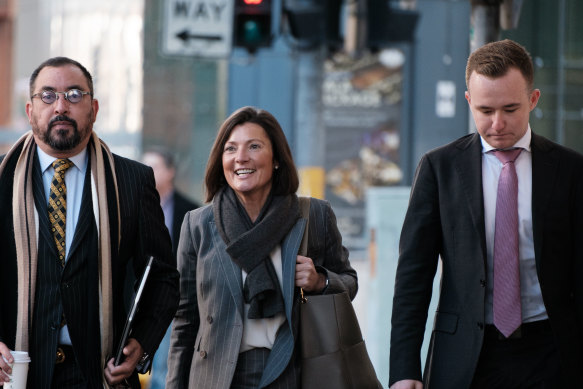 “This sounds very selfish, but it was leading up to Christmas; I was extremely busy anyway,” Griffiths said. His initial reaction was one of shock, he said, but he gave the letter “my top priority attention”.

Griffiths was called to give evidence in the trial of Sydney businesswoman Helen Rosamond, who is standing trial on charges relating to her alleged role in defrauding NAB of $15 million between 2013 and 2017.

The court has heard Rosamond’s event management company Human Group organised leadership conferences among other events for the bank.

The Crown alleges some of Human Group’s invoices to NAB covered Rosamond’s personal expenses, including $228,747 for an interior designer to furnish her Potts Point terrace, as well as gifts for senior bank staffer Rosemary Rogers.

Rogers, a former chief of staff to the bank’s chief executives, has previously told the court she approved inflated invoices from Human Group as part of a fraudulent scheme with Rosamond.

Griffiths told the court on Tuesday he was “disappointed” to be instructed by the bank’s senior management to interview Rogers on December 7, the day after he received the letter referring to “Rose” and Human Group.

“I do regard myself as a professional and I would have ideally preferred a little bit longer,” he said.

His 42-minute interview with Rogers in Melbourne on December 7 was played to the jury on Tuesday.

During her interview, Rogers told Griffiths that a $1.5 million bank transfer to her from Human Group was a loan from Rosamond. Rogers said she was “just going to use it to reduce the interest [on a home loan] and then flip it back to” Rosamond.

But Rogers has told Rosamond’s trial that she received a house deposit, a BMW and a boat among other “benefits” from Rosamond, and the cost was ultimately covered by NAB when she approved Human Group’s invoices.

Griffiths subsequently spoke to Rosamond, he told the court, and agreed he did not tell her he was recording the conversation or read her her rights, as he did with Rogers. He did not agree with Rosamond’s barrister that “out of fairness” he should have done both of those things. The jury was also played that interview.

Griffiths referred the matter to NSW and Victoria Police in early 2018, the court heard.