London: Queen Elizabeth II, the longest-reigning monarch in British history, has been farewelled in a historic service at Westminster Abbey as an estimated two million people lined London’s streets to thank their beloved sovereign, who reigned for longer than most can remember.

Her son, King Charles III, and his wife, Camilla, Queen Consort, members of many European royal families and more than 100 world leaders, presidents and prime ministers paid their respects at the state funeral, the first in Britain since that of Sir Winston Churchill in 1965. It began after an emotional procession of the senior royals following the coffin from Westminster Hall.

The body of the late Queen had lain in state for almost four days, a period which closed just hours before the start of the service. The queue, where hundreds of thousands waited through cold nights and long days for just a few minutes to view her casket, was declared shut just after 10.30pm on Sunday London time.

In his sermon, the Archbishop of Canterbury, Justin Welby, described the Queen as having touched “a multitude of lives” and having been a “joyful” figure for many.

He said the outpouring of emotion “arises from her abundant life and loving service, now gone from us”.

The archbishop said the pattern for many leaders was to be “exalted in life and forgotten after death”, but few had received the outpouring of love seen over the past 10 days.

He echoed the Queen’s reassuring words from her lockdown address to Britain in 2020, when he told the congregation that all who follow her example, and her faith in God, “can with her say ‘we will meet again’.”

The Queen, who acceded to the throne on February 6, 1952, upon the death of her father, George VI, was first the sovereign to be given a funeral at the abbey since George II in 1760 which marked the end of a ten-day national period of mourning.

Among mourners were future king Prince George, aged nine, and his sister, Princess Charlotte, seven, who walked between their parents behind the Queen’s coffin as part of a solemn procession through Westminster Abbey.

The hour-long service finished with The Last Post, sounded by the state trumpeters of the Household Cavalry as two minutes’ silence was observed across the United Kingdom. Crowds lining The Mall broke into spontaneous applause after the congregation then sang God Save The King. 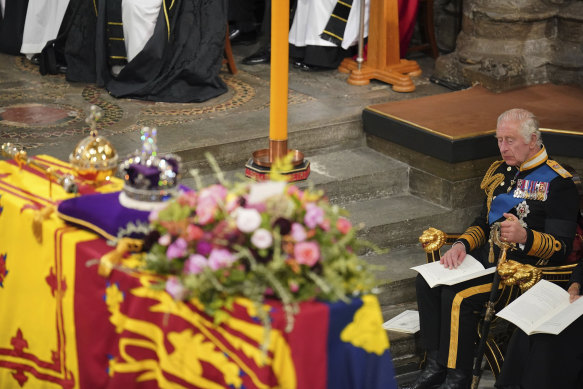 The sovereign’s piper played a traditional lament, Sleep, dearie, sleep, as the Queen’s coffin was carried by a historic gun carriage for a procession in front of tens of thousands of her adoring subjects to Wellington Arch, Hyde Park Corner, before travelling to Windsor for a committal service and a private burial. More than 2000 military personnel, including from Commonwealth nations, marched in the century-old traditional funeral procession.

Australian Prime Minister Anthony Albanese and Governor-General David Hurley sat seven rows back from the front of the church, surrounded by peers from 14 British realms, including Canada and New Zealand, as well as other Commonwealth nations.

A wreath that adorned the coffin included flowers and foliage requested by the King, which were cut from the gardens of Buckingham Palace, Clarence House and Highgrove House. 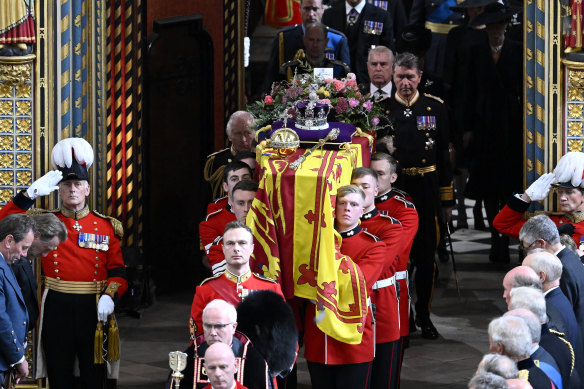 King Charles III, Camilla, the Queen Consort and other members of the Royal family follow behind the coffin of Queen Elizabeth II.Credit:Getty

It was accompanied by a card, handwritten by the King, which said: “In loving and devoted memory. Charles R.”

The wreath included rosemary for remembrance and myrtle cut from a plant grown from a sprig of myrtle in the Queen’s wedding bouquet. English oak was included to symbolise the strength of love, as well as pelargoniums, garden roses, autumnal hydrangea, sedum, dahlias and scabious.

The service began with the choir singing the Burial Sentences — starting with “I am the resurrection and the life” to a setting by William Croft as the coffin was processed through the abbey.

Those five sentences, which are lines of scripture set to music, were sung at the beginning of the funeral of the Queen Mother in 2002 and have been used at every state funeral since the early 18th century. 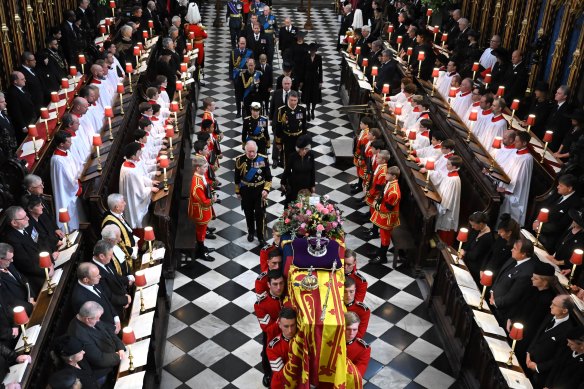 King Charles III, Camilla, Queen Consort, and members of the Royal family walk behind the coffin of Queen Elizabeth IICredit:Getty

British Prime Minister Liz Truss, who was appointed by the Queen just two days before the 96-year-old died at Balmoral on September 8, read a Bible verse, from John 14: 1-9a, which began “do not let your hearts be troubled. You believe in God; believe also in me.”

After prayers were said from the high altar, the choir sang O Taste and See, composed by Ralph Vaughan Williams for the Queen’s coronation in 1953.

The service, written in consultation with the late Queen, had echoes of the funeral of her father King George VI, which will be held at St George’s Chapel, where the committal service for Elizabeth II will take place later on Monday afternoon. 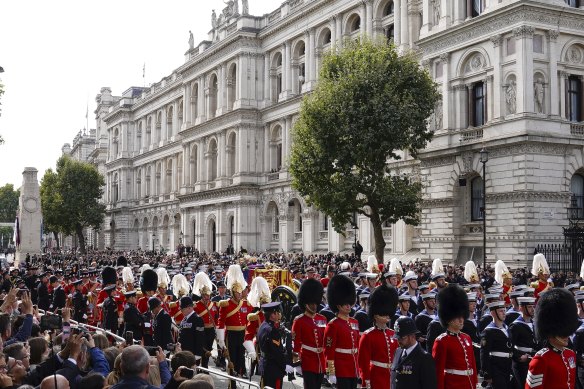 The coffin of Queen Elizabeth II is pulled on a gun carriage through the streets of London following her funeral service.Credit:AP

At that service, which was much shorter, the choir also sang Psalm 23, The Lord is My Shepherd, just as the congregation sang this time for the Queen. The hymn was sung, too, at the wedding of the then Princess Elizabeth and Lieutenant Philip Mountbatten in 1947.

Among Australians in the service were Professor Barbara, a haematologist and oncologist, who has been honoured for her work in medicine, Dr Lissant Bolton from the British Museum and Professor Mark Dodgson, who researches, teaches, and consults on innovation and entrepreneurship at Oxford University.

Australian military heroes Mark Donaldson and Keith Payne, winners of the Victoria Cross more than five decades apart, were also part of a procession into the abbey.

Receive a wrap of our coverage as the world mourns Queen Elizabeth II in our Morning Edition newsletter. Sign up here.