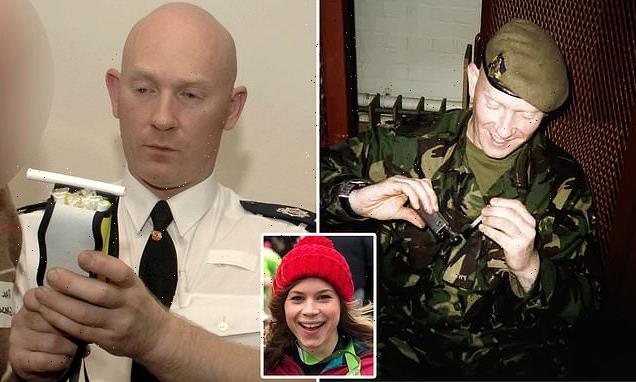 Wayne Couzens was a gun and porn-obsessed ‘weirdo’ who was rumoured by his police colleagues to be a ‘pervert’.

He was just 14 when he shot a classmate with his father’s air gun, laughing out loud as the boy screamed in pain.

His behaviour was so alarming that Warwick Lewis, a former school friend, said he was not surprised to discover that the married father-of-two had been charged with the murder and kidnap of marketing manager Sarah Everard, 33, in March.

‘The fact I was not shocked, looking back on it, is pretty hideous,’ he said.

Couzens, a Scotland Yard firearms officer, appeared to be a devoted family man with a successful career guarding Westminster VIPs. 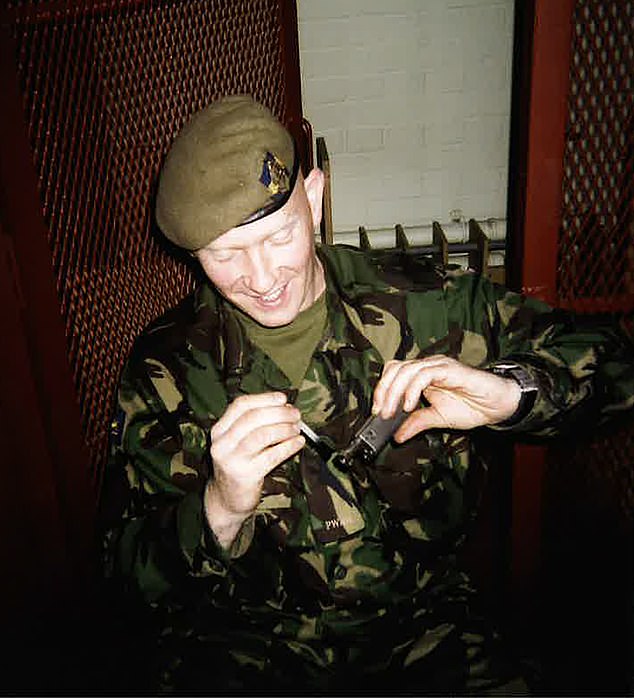 But there was also a disturbing side to him which had been evident to those who knew him for more than three decades.

Born in Dover in December 1972, Couzens is the elder of two boys, whose father ran a car body shop and garage.

The family lived in a large semi-detached house near the gates of Castlemount School, where Couzens was a pupil and had a reputation as a bully and a martial arts fanatic.

His former classmate Mr Lewis, now 48, said: ‘Wayne was not a nice kid. He was one of those children who had a completely different side to him. There was one occasion where we were at Wayne’s, he was laughing and shouting off as he used to, [and] he produced an airgun that was his dad’s, an old Western-type revolver.

‘Out of the blue he shot [another pupil] in the nuts [testicles]. The boy screamed and grabbed hold of himself and was crying his eyes out.

‘He dropped his trousers and was looking to see if he was OK – that’s not something he would do in front of his peers. 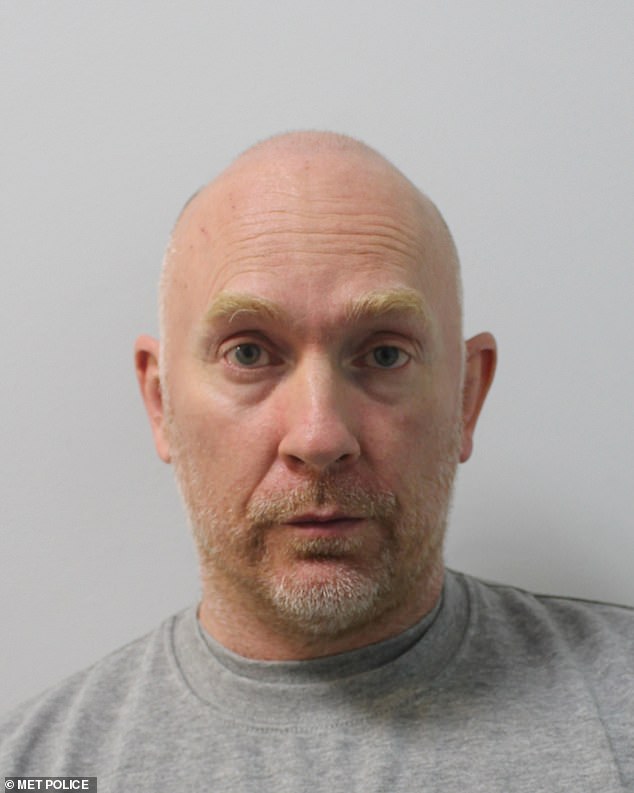 Couzens, a Scotland Yard firearms officer, appeared to be a devoted family man but there was a disturbing side to him which was clear to those who knew him for more than three decades

‘We were all shocked. Wayne thought it was funny and called him a p****.’

That victim’s 48-year-old ex-wife confirmed the shocking assault, saying: ‘Wayne walked up to him and shot him with a BB gun so he had violent tendencies even back then.

‘He was a strange one at school, he didn’t have many friends, he was an oddball.’

Mr Lewis, a support worker for vulnerable adults who now lives in Middle Chinnock, Somerset, also told how Couzens lured another pupil to his house before hurling a fishing reel at his head.

A relative of that victim said: ‘Wayne certainly had a violent streak in school. I know from talking to others that it’s surprising he managed to join the police force.’

Couzens, who was in the cadets, also sneaked into school after classes and took pot shots at the windows with his father’s gun.

‘He pulled out his airgun and started shooting out all the windows. For me, I was panicking that we would get caught,’ Mr Lewis said.

‘The thing about all this was when I saw the news and I read the name I knew it was him. It did not even surprise me. I was not shocked that he did that.’

Dean Childs, who was also in Couzens’s class and is now a secondary school teacher, recalled how Couzens provoked another pupil with a compass.

The 48-year-old from Dover said: ‘I do remember him bringing a BB gun into school and I also remember him bullying one kid and the kid just turned around and beat him up. I remember Wayne poking the boy with a compass and Wayne ended up getting a good hiding, he was quite black and blue.

‘But no one felt really sorry for him – everyone kind of went, ‘It serves him right.’

Mr Childs described Couzens as an average student who had aspirations to play football despite not being very talented.

He said: ‘He was a C-grade, run-of-the-mill student. He was very awkward in the way that he was. He had to try very hard to get people to like him, to impress.

‘And Wayne was not popular with the girls. He was very pale, very ginger, so he wasn’t the prettiest lad, he definitely wasn’t a womaniser.’

Couzens’s school friends all agreed that he had loving parents and ‘never wanted for anything’ thanks to his family’s successful business.

Warwick Lewis, a former school friend, said he was not surprised to discover that Couzens had been charged with the murder and kidnap of Sarah Everard (pictured), 33, in March

Mr Childs said: ‘His dad was quite well off and had more money than we did. Wayne was spoilt in terms of what his dad could give him and he was a show-off.’

At 17, Couzens joined his father at his garage and he spent the next 21 years working by his side.

His lifelong obsession with guns saw him sign up to the Territorial Army in 2002.

Couzens, who served with the 3rd battalion, the Princess of Wales’s Royal Regiment, for two years, was ‘enthusiastic’ and ‘loved blowing things up’, according to another recruit.

But it was Couzens’s preoccupation with scouring the internet for pornography that left the recruit, who did not want to be named, feeling uneasy.

The former soldier said that Couzens enlisted as a combat infantryman at Dover but did not go on any operations overseas, which struck him as ‘weird’.

‘Wayne knew how to blow things up,’ he said. ‘I think he loved it. He got to play with the latest weapons. But there was nothing exciting about him. He didn’t have a girlfriend that I knew of.’

Couzens eventually met his wife Elena, now 39, a lab technician born in Ukraine, over the internet.

The couple, who live in a £200,000 three-bedroom house in Deal, Kent, married in her home country in 2006 and have been on holiday there with their two children.

But Couzens’s predilection for X-rated websites and violence went unnoticed by his colleagues at Kent Police when he joined as a special constable in December 2006.

A former special said: ‘I know him very well, and all I’ve got to say is that he was quite a good officer at the time. He didn’t do anything to make me feel uncomfortable.’

Couzens, who rose to the rank of section officer, equivalent to a sergeant, had aspirations of becoming a full-time officer but the force was not recruiting at the time.

So in March 2011 he joined the Civil Nuclear Constabulary, where he was equipped with a Heckler and Koch G36 rifle, as part of the team protecting Sellafield and later Dungeness nuclear power station.

His odd behaviour there is rumoured to have made some female officers feel uncomfortable – although the Civil Nuclear Police Federation has confirmed there were no official complaints about him.

The role came to an end when he failed an annual fitness test and he joined the Metropolitan Police in September 2018, initially covering the Bromley area of south-east London.

He moved to the Parliamentary and Diplomatic Protection Command in February last year where his primary role saw him guarding MPs, VIPs and foreign embassies.

A police source said: ‘He was an oddball, a weirdo, there were rumours about him being a pervert.’

A former colleague at the Metropolitan Police added: ‘No one really knew him, even the people in the same command.

‘He wasn’t really in the Met for any length of time and for quite a few months [in the run up to the murder] he kept having time off.

‘No one knew why he was off sick, but you have to wonder now what was going on.’