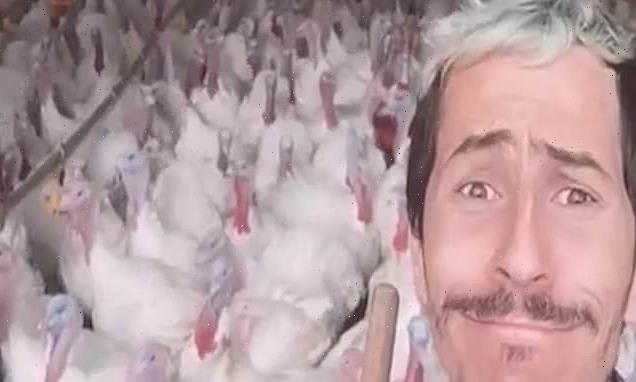 Turkey tongue twisters! Spanish poultry farmer becomes a TikTok hit with clips of him ‘talking’ to his birds

This is the moment a young rancher can be seen ‘talking’ with his flock of turkeys while on a farm in Spain.

In the short clip, which has been viewed on his TikTok page almost 9million times, Juan starts mimicking the hundreds of turkeys that can be seen behind him. 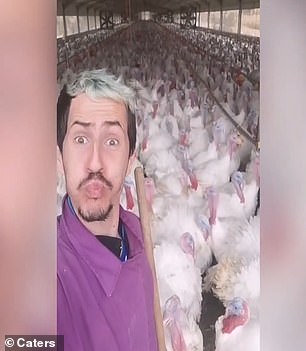 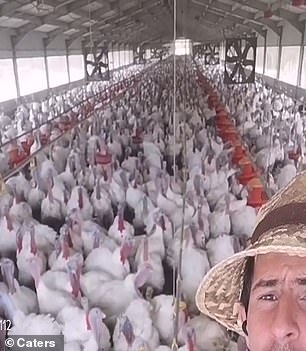 He starts pulling a face as the entire rafter replies in a unison of clucks, gurgles and babbling before Juan launches into a football chant.

Juan, a fan of Spanish football, starts serenading his birds with one of the La Liga side Real Betis’ most popular songs.

He then calls on the turkeys, ‘louder, louder!’ and they respond with a chorus of deafening gurgles.

By the end of the footage, he again ‘talks’ to his turkeys with cries of ‘Hala (Go) Madrid’, after the historic Real Madrid CF.

Juan shared the video to his social media page with the caption: ‘HAPPY THURSDAY’. 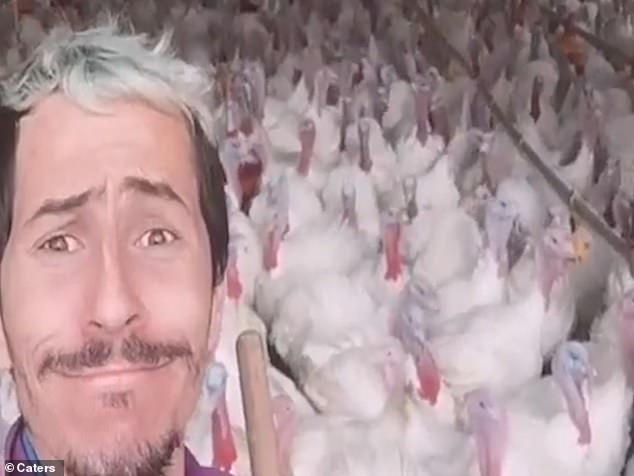 Juan gets his turkeys going with his own ‘gobbles’ and they reply in a unison of clucks, gurgles and babbling 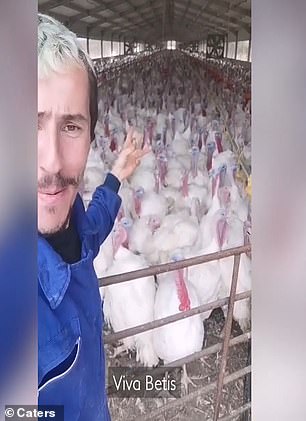 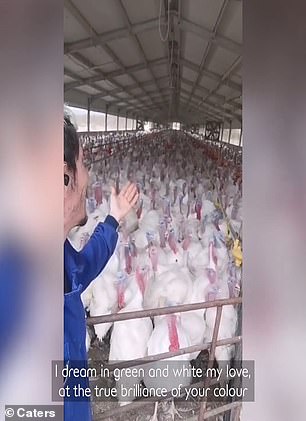 An avid Spanish football fan, Juan’s TikTok videos make the most of popular chants and songs, as he serenades the flock

On his TikTok account, which has 80,000 followers, he describes himself as a ‘lover of the countryside, nature and animals.’

Discussing the viral clip that has been viewed across the world almost 9 million times, Juan said, ‘The truth is I really enjoy my work with the turkeys.’

And it’s clear that his fans love his work too.

Another person said: ‘This man has become the chief of turkeys.’

While Estefania Alcaide commented: ‘It looks like a rock concert when they repeat what the singer yells.’

Turkeys make a wide variety of different sounds, with their vocal range spanning from ‘yelps’ and ‘purrs’.

Only male turkeys during season have the ability to make the ‘gobble’ sound, meaning males are nicknamed ‘gobblers’, while females are referred to as ‘hens’.