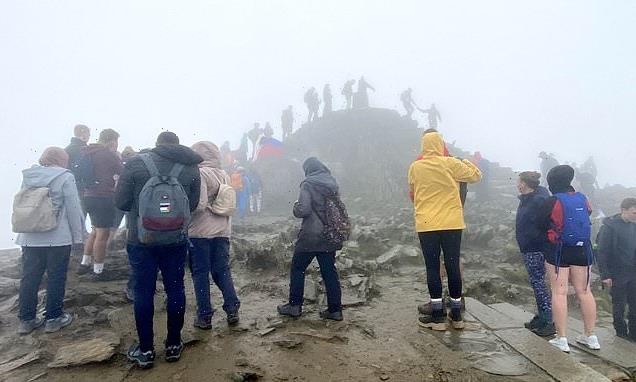 Walkers attempting to scale Snowdon have been urged to ‘respect the mountain’ after a spike in visitors caused a 45-minute queue at the summit.

Many are believed to be staycationers looking for adventures at home after Covid travel rules ruined foreign holidays for families.

But the beauty spot has proven so popular this year that, in July, a 45-minute queue formed at the top from people wanting to stand on the summit.

And on parts of the eight-mile path up the mountain, authorities have reported finding litter and belongings left behind. 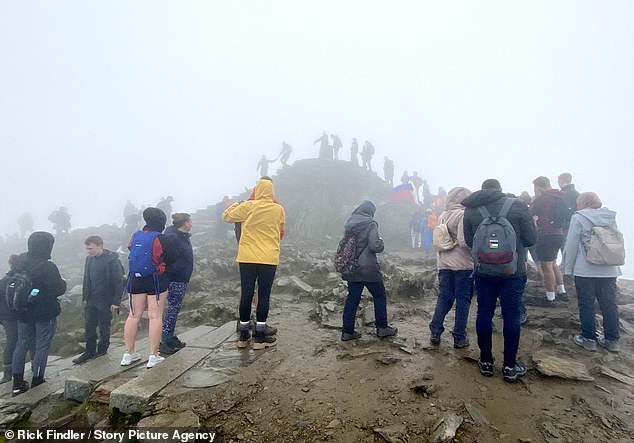 John Harold, director of the Snowdonia Society, which helps maintain the mountain, said the problems of litter as well as footpath erosion are now ‘significant’.

‘We all know that access to beautiful places and special places like Snowdon has been important to people, more so than ever recently, but the pressures that have come with that are really quite significant,’ he told the BBC.

‘Litter, footpath erosion, wild camping, traffic, parking – in a sense, none of these are new, but they’ve all acquired a really sharp edge in the last 18 months.’

He added that many people who were visiting for the day were not coming well prepared for tough terrain and weather conditions.

Elfed Williams, a hiker, said this year was ‘the worst’ he could remember for crowds, but that numbers could be even higher if the cafe on top was open and the small train that takes people most of the way up went all the way to the summit. 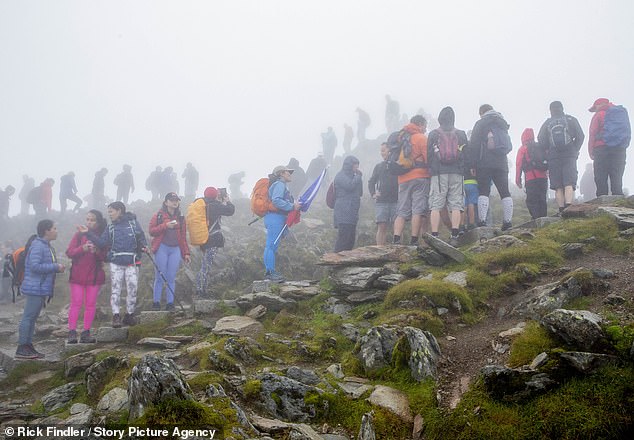 On parts of the eight-mile path up the mountain, authorities have reported finding litter and belongings left behind

He also claimed that many people climbing the mountain would usually be going on European summer holidays, but were instead forced to go on a staycation because of restrictions and costly quarantine measures.

‘They’re not mountaineers or trekkers really, they’re the people who I think usually go to Spain or whatever for their holiday so they can’t go now with Covid of course, so they’ve decided to stay in the UK and come to Wales,’ he said.

Some even chose to bring beachwear with them, he claimed, after spotting one person in ‘flip flops’ attempting the climb.

He added that his message to people considering visiting was: ‘Please come, by all means, but please respect the mountain.’

Emyr Williams, Chief Executive of the Snowdonia National Park Authority said: ‘The past eighteen months have been unprecedented in the National Park’s 70 year history, and we as an Authority acknowledge the pressure that the communities have had to endure, especially those communities that have never experienced visitor numbers to the same extent before.

‘We hope that as an Authority, along with our partners, that we have succeeded to alleviate some of that pressure, and we will continue to do what is within our powers to ensure that the communities of Snowdonia are protected.’