Reuters reporters were sentenced to seven years in prison on charges of breaking the country’s Official Secrets Act. 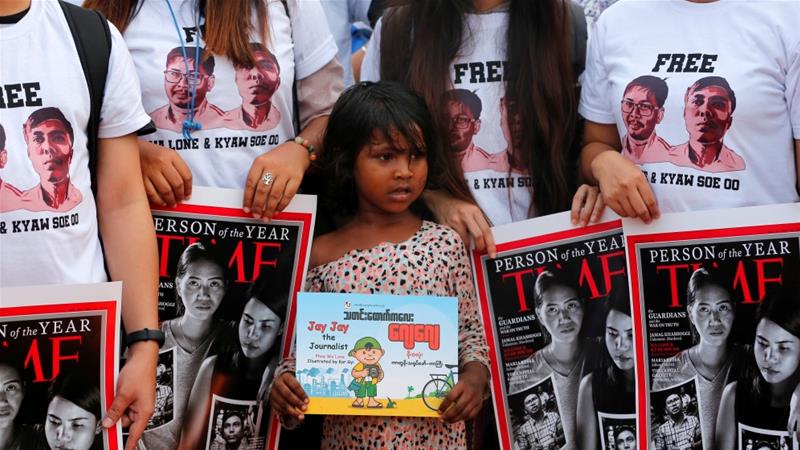 Wa Lone and Kyaw Soe Oo, the two Reuters news agency journalists jailed while reporting on last year’s Rohingya crisis in Myanmar, are set to appeal the decision on Monday.

The reporters were arrested in December 2017 and later sentenced to seven years in prison under the country’s colonial-era Official Secrets Act for what prosecutors said was the possession of classified material on security operations.

The duo – who have spent more than a year behind bars – pleaded not guilty, insisting that they had been framed by the police.

Reuters also disputed the charge and said they were set up after probing the massacre of 10 Rohingya during a military crackdown that forced hundreds of thousands of people belonging to the long-persecuted, mostly Muslim minority to flee their homes in western Myanmar’s Rakhine State for neighbouring Bangladesh.

The ruling in September by a Yangon district court sparked international outcry and widespread condemnation.

Media advocates say the convictions sent a chilling message about investigating sensitive issues in Myanmar as it emerges from decades of military rule.

But calls for the reporters’ release have fallen flat inside Myanmar, with civilian leader Aung San Suu Kyi saying in September that the jailing of the reporters had nothing to do with freedom of expression. She said they were not jailed because they were journalists.

Outside Myanmar, Wa Lone, 32, and Kyaw Soe Oo, 28, have been feted with a string of prestigious awards presented in their absence and hailed as heroes.

The two reporters were also jointly named Time Magazine’s Person of the Year this month, alongside other persecuted and slain journalists, as concerns grow for deteriorating press freedoms around the world.

The anniversary of their arrest on December 12 was marked by newsrooms publishing photos of their staff flashing two thumbs up, a defiant gesture Wa Lone made at court that became synonymous with the duo’s resilience.

“A year ago, Wa Lone and Kyaw Soe Oo were arrested in a set-up by police, intended to interfere with their reporting on a massacre in Myanmar,” Reuters Editor-in-Chief Stephen J Adler said in a statement on December 12.

“The fact that they remain in prison for a crime they did not commit calls into question Myanmar’s commitment to democracy, freedom of expression and rule of law.”

The trial was widely regarded as a sham and payback for uncovering the September 2017 massacre in Inn Din village.

One whistle-blowing police officer told the court his superior ordered a sting to entrap the reporters.

More than 720,000 Rohingya have fled Rakhine state to Bangladesh since the military’s crackdown last August, bringing accounts of rape, arson and mass killings.

UN investigators have said the evidence warrants charges of genocide against the country’s top generals, but the army maintains it was defending itself against Rohingya militants.