Veteran foreign correspondent Robert Fisk, who famously interviewed Osama Bin Laden but cast doubt on war crimes in Syria, has died at the age of 74.

The British journalist Robert Fisk, who was one of the best-known Middle East correspondents after spending his career reporting from the troubled region, died after a short illness, his employer said on Monday.

Fisk, whose reporting often sparked controversy, died Sunday at a hospital in Dublin, shortly after he was taken there after falling ill at his home in the Irish capital.

The Independent, where he had worked since 1989, described him as the most celebrated journalist of his era.

‘Fearless, uncompromising, determined and utterly committed to uncovering the truth and reality at all costs, Robert Fisk was the greatest journalist of his generation,’ said Christian Broughton, managing director of the newspaper.

‘The fire he lit at The Independent will burn on,’ he said.

Among Mr Fisk’s lifetime of journalistic accomplishments, was a 1996 interview he carried out in Afghanistan with Osama Bin Laden – five years before the founder of Al-Qaeda would launch the September 11 attack that killed 2,977 people. 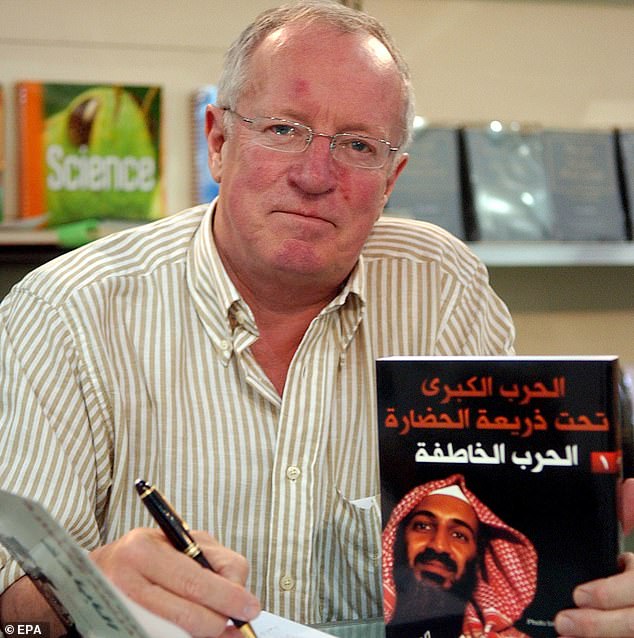 Robert Fisk, one of the best-known Middle East correspondents, has died after a short battle with illness at the age of 74

In his 2006 book The Great War for Civilisation, Robert Fisk wrote about an interview he held with Al Qaeda founder Osama Bin Laden in Afghanistan in 1996 – five years before the September 11 terror attacks.

Fisk received a phone call while working at his Beirut office that told him ‘Mr Robert, a friend you met in Sudan wants to see you’. The cryptic message was referring to Bin Laden, whom he met a month later.

An extract from the book reads: ‘It was night before we stopped, in an orchard where wooden sofas had been covered in army blankets piled with belts and webbing and where armed men emerged out of the darkness, some holding rifles, others machine guns.

‘They were the Arab mujahedin, the Arab “Afghans” denounced by the presidents and kings of half the Arab world and by the United States of America. Very soon, the world would know them as al-Qa’ida.’

After hearing him speak about the US, Saudi Arabia and trouble in the region, Fisk reflected: ‘Bin Laden sometimes stopped speaking for all of 60 seconds in order to reflect on his words. Most Arabs, faced with a reporter’s question, would say the first thing that came into their heads for fear that they would appear ignorant if they did not. Bin Laden was different. He was alarming because he was possessed of that quality which leads men to war: total self-conviction.’

Kent-born Fisk gained particular fame and popularity in the region for his opposition to the Iraq war, challenging the official U.S. government narrative of weapons of mass destruction as it laid the groundwork for the 2003 invasion.

After the Sept. 11, 2011 attacks and the subsequent U.S. invasion of Iraq, he travelled to the Pakistan-Afghan border, where he was attacked by a group of Afghan refugees.

He later wrote about the incident from the refugees´ perspective, describing his beating by refugees as a ‘symbol of the hatred and fury of this filthy war.’

‘I realized – there were all the Afghan men and boys who had attacked me who should never have done so but whose brutality was entirely the product of others, of us – of we who had armed their struggle against the Russians and ignored their pain and laughed at their civil war,’ he wrote.

His most controversial reporting, however, was on the conflict in Syria in the past decade.

Fisk began his career on Fleet Street at the Sunday Express.

He went on to work for The Times, where he was based in Northern Ireland, Portugal and the Middle East.

He moved to Beirut in 1976, a year after the country´s civil war broke out, and continued to work and live from an apartment located on the Lebanese capital´s famed Mediterranean corniche until his death.

From his base in Beirut, Fisk traveled across the Mideast and beyond, covering almost every big story in the region, including the Lebanon war, the Iran-Iraq war, the Arab-Israeli conflict, the war in Algeria, conflict in Afghanistan, Saddam Hussein’s invasion of Kuwait, the U.S. invasion and occupation of Iraq, the Arab Spring and Syria’s civil war.

His reporting earned him awards, but also invited controversy, particularly his coverage of the Syria conflict.

His coverage of the ongoing war in the country left many former admirers to voice criticism over a pereceived lack of criticism toward his sources, that included people within the Syrian regime and army. The journalist always maintained that his writing reflected what he has seen and heard while reporting in the country.

In 1982, he was one of the first journalists at the Sabra and Shatila camp in Beirut, where Christian militiamen slaughtered hundreds of Palestinian refugees. 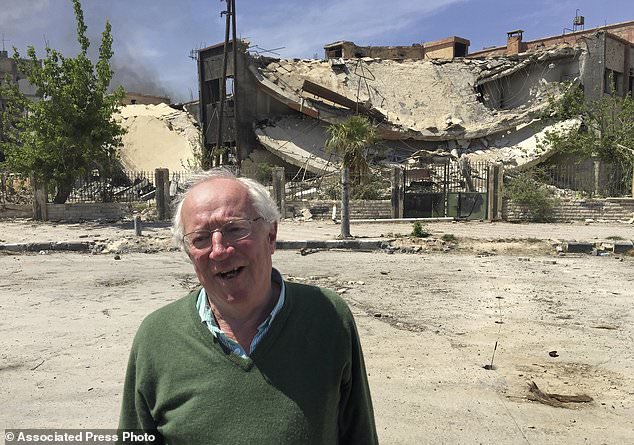 Critics voiced concern over Robert Fisk’s reporting in Syria during the country’s war over the past 10 years. Fisk, pictured in front of a damaged building in the Damascus suburb of Douma, in 2018, always maintained he was reporting strictly on what he had seen and heard in the conflict

Earlier that year, he was also the first foreign journalist to report on the scale of the Hama massacre in 1982, when then-Syrian President Hafez Assad launched a withering assault on the rebellious city in central Syria, leveling entire neighborhoods and killing thousands in one of the most notorious massacres in the modern Middle East.

Fisk was in love with Beirut, the city he called home, sticking with it during the most difficult days of the 1975-90 civil war when foreign journalists fell victim to kidnappers.

Back then, he used the offices of The Associated Press to file his stories during the war, where colleagues called him ‘the Fisk,’ or ‘Fisky.’

In his book chronicling the war, Pity the Nation, he describes filing his dispatches by furiously punching a telex tape at the bureau, which he described as ‘a place of dirty white walls and heavy battleship-grey metal desks with glass tops and iron typewriters’ and a ‘massive, evil-tempered generator’ on the balcony.

‘So sad to lose a true friend and a great journalist. The Temple of truth is gone,’ said Marwan Chukri, director of the Foreign Press Center at the Information Ministry in Beirut.

Fisk, who was often allowed access to government-held areas when other journalists were banished, was accused of siding with the government of President Bashar Assad and whitewashing crimes committed by Syrian security forces, most famously when he cast doubt on whether the government carried out chemical attacks against civilians in the Damascus suburb of Douma.

His deep attachment to Lebanon and its people consistently came through his writing. 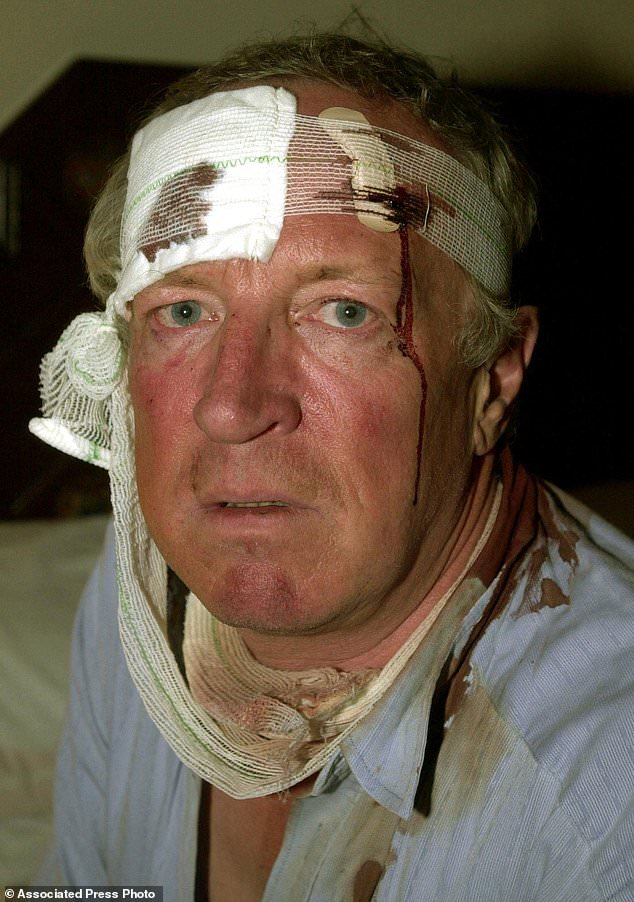 After the September 11th attacks and the subsequent U.S. invasion of Iraq, Fisk travelled to the Pakistan-Afghan border, where he was attacked by a group of Afghan refugees

Following the massive explosion that tore through Beirut port on August 4 and destroyed large parts of the city, he wrote a scathing article that summed up the country’s curse and corrupt political class.

‘So here is one of the most educated nations in the region with the most talented and courageous – and generous and kindliest – of peoples, blessed by snows and mountains and Roman ruins and the finest food and the greatest intellect and a history of millennia. And yet it cannot run its currency, supply its electric power, cure its sick or protect its people,’ Fisk wrote.

Fisk wrote several books, including ‘Pity the Nation: Lebanon at War’ and ‘The Great War for Civilisation: The Conquest of the Middle East.’

He is survived by his wife, Nelofer Pazira, a filmmaker and human rights activist.