Volunteers who run a charity that has occupied an unusual building on Catholic Church land for 50 years say they feel let down after the church successfully argued against heritage protection for its CBD base.

The Stella Maris Seafarers’ Centre at 600 Little Collins Street was one of only a handful of buildings that did not make the final cut for heritage protection despite initially being put forward by Melbourne City Council under its sweeping review of buildings in the Hoddle Grid. 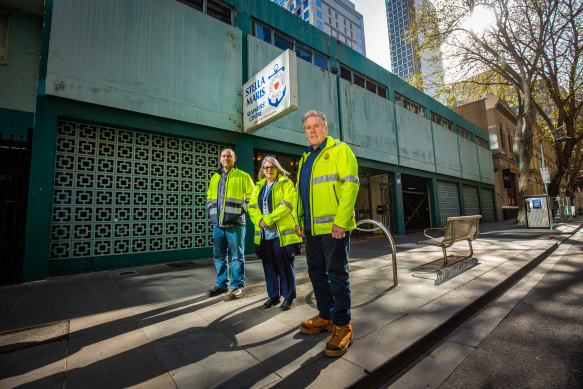 A report from Planning Panels Victoria showed that the Roman Catholic Trusts Corporation for the Diocese of Melbourne was the key objector to the building receiving protection, claiming it was not of heritage significance architecturally, historically or socially.

The two-storey post-war structure, known for its teal facade and decorative concrete panels, was purpose-built in 1972 on land owned by the Catholic Church behind the 155-year-old Saint Augustine’s parish.

The Melbourne centre is one of more than 300 branches of the global Catholic organisation Stella Maris and has been providing support for more than 100 years to seafarers who are often cooped up on cargo and merchant ships for years at a time.

Recently, volunteers have been providing COVID-19 vaccinations, often late at night, for arriving seafarers who have been confined to their ships during the pandemic.

Stella Maris Seafarers’ Centre president Seamus Quinn said the organisation’s three paid staff and dozens of volunteers looked after many of the more than 65,000 seafarers who docked in Melbourne each year. 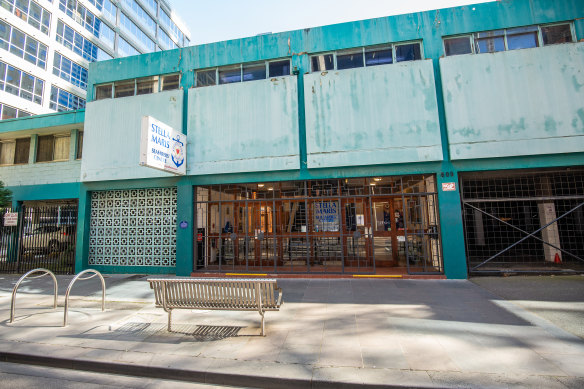 They transport the ship workers – often low-paid and from countries including Vietnam, India, China and Russia – on buses to the city centre where they can feel safe, enjoy having their feet on land and have a meal in the green courtyard.

“We try to make it a home away from home when they come in,” said Quinn, a volunteer for 45 years.

Being refused heritage protection was disheartening for the organisation, Quinn said, and he was concerned for the future of its home. “The whole centre was very disappointed.”

In the Catholic Trust’s submission to the planning panel, prepared by heritage consultant Bryce Raworth, it argued that the centre was “not widely known in Melbourne or considered iconic”, and it was only relevant for a small number of people. 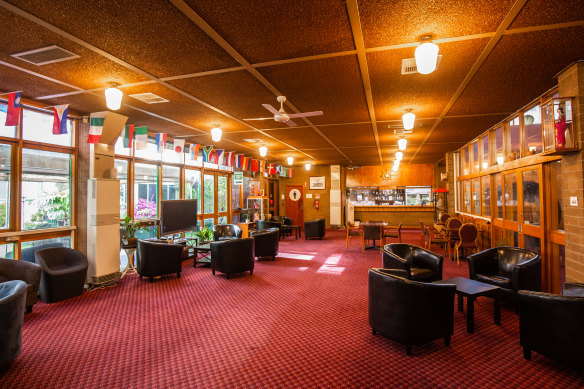 The church submitted that Stella Maris had moved three times in about 90 years and that protection was unnecessary with the Mission to Seamen building on Flinders Street already heritage listed. “We don’t need every example to complete the showbag.”

Two heritage experts providing evidence for the council pushed for the building’s protection, saying that the community’s small size should not exclude it from having social significance and the structure’s unique design drove curiosity in passersby.

The panel concluded the site’s significance hadn’t been adequately established and recommended abandoning its inclusion in the heritage review.

A spokesperson for the Catholic Archdiocese of Melbourne did not comment on plans for the site but said they supported Stella Maris’ continuation and strengthening into the future. They said the panel’s decision was based on the building itself, not the organisation’s significance.

“Stella Maris enjoys the support and confidence of Archbishop [Peter] Comensoli, who has reinforced his gratitude for this ministry through his own visitations,” they said.

City of Melbourne councillor Rohan Leppert said the proposal to protect the Stella Maris building had been controversial, but he supported the end result.

Stella Maris committee member Paul Kucera was surprised by the Catholic Church’s position, given it understands Stella Maris’ work and the two groups generally have a good relationship.

“The community we benefit and provide welfare for is unseen. It comes and goes in the middle of the night,” Kucera said.

“They visit our shores, bring our goods to the country, they’re foreigners, but they see Stella Maris as their place of safety and trust.”

He hoped the building – which recently hosted film crews for an upcoming Robbie Williams biopic – would be reconsidered for heritage overlay protection to keep it part of the CBD’s landscape.

“How many buildings around Melbourne exist from the late ’60s, early ’70s with peculiar designs like that?”

With the site now wide open to redevelopment, Kucera said his “greatest fear is that we’d be cut out altogether”.