Budapest: Union leaders in Hungary have called for a national strike and protests on January 19 to oppose labour code changes they see as a "slave law" harmful to workers.

A crowd of at least 10,000 people gathered outside the Hungarian parliament building to protest a law approved in December that allows employers to request up to 400 hours of overtime a year from employees. 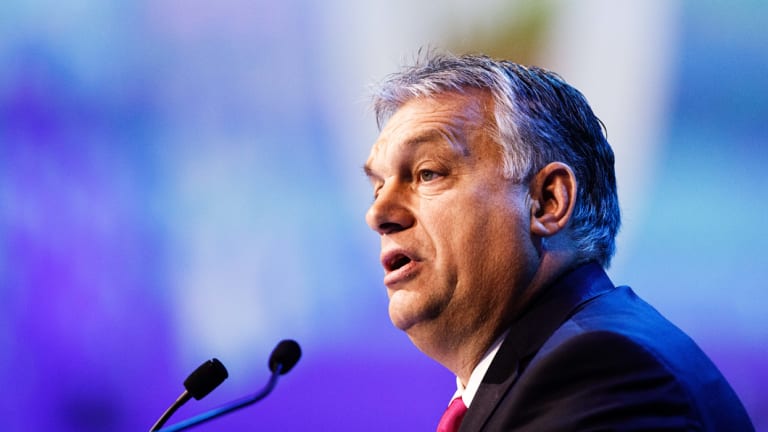 Government spokesman Istvan Hollik repeated the claim that Hungarian-American billionaire George Soros is funding protests of the labour law, but did not address the protesters' specific grievances.

"Hungary is under attack because it stands in the way of the whole pro-immigration politics and, additionally, it has more and more allies in this issue," Hollik said in a video posted on the government website.

Orban won a third consecutive four-year term in April with a campaign based almost exclusively on his fervent anti-immigration stance. 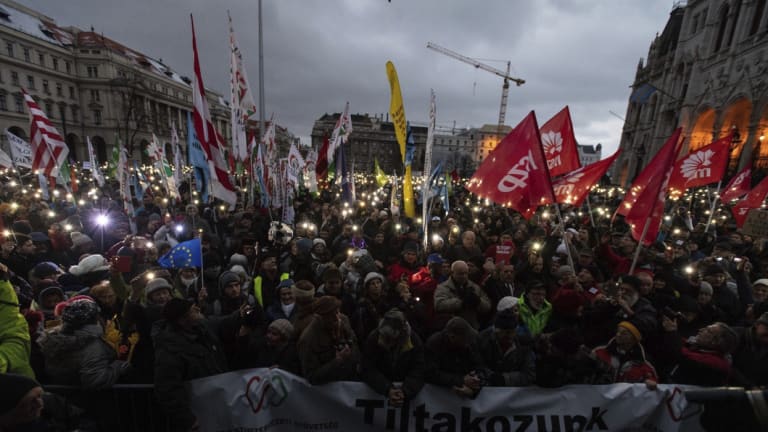 Anti-government demonstrators carry a banner reading “We protest against the slave bill” as they protest in front of the Parliament building at Kossuth square in Budapest on Saturday.Credit:AP

Politicians from all the major opposition parties, as well as civic groups and students, took part in the rally, which began with a march from Heroes Square to the neo-Gothic parliament. Earlier protests were held in the last two weeks of 2018.

Csaba Molnar, of the opposition Democratic Coalition, said that while the protest focused on the labor code revisions, it reflected widespread dissatisfaction with many government policies.

"We are not rising up against one Orban law or another, but against the many, many laws of the repressive regime," Molnar said. "We will continue to rise up until we topple Orban's rotten-to-the-core regime."

Opposition parties are gathering signatures to pressure Orban to make Hungary part of a new European Union prosecution office targeting corruption. Hungary is among the handful of EU countries that has opted out of the anti-corruption initiative.

Some Hungarians disapprove of Orban's campaign against a Budapest university founded by Soros, the creation of a new court system under direct government control and the state media's transformation into a tool for government propaganda.

As states across the country issue stay-at-home orders to slow the spread of the novel coronavirus (COVID-19), golfers are still...