Donald Trump found out on Tuesday night that it’s never wise to talk over a Black woman. During a ABC News town hall, the impeached president answered questions from a number of undecided Black voters who appeared less than impressed by his often-deceptive answers. One of whom was an Assistant Professor who cut Trump off when he attempted to speak before she was finished her question.

Ellesia Blaque, who supported Hillary Clinton in 2016, asked Trump during the socially distanced Philadelphia event, how the White House planned to protect people like her, who live with a pre-existing condition. The Trump Administration is currently fighting to completely dismantle the Affordable Care Act which insured longtime sufferers who were often uninsurable through company-sponsored plans. 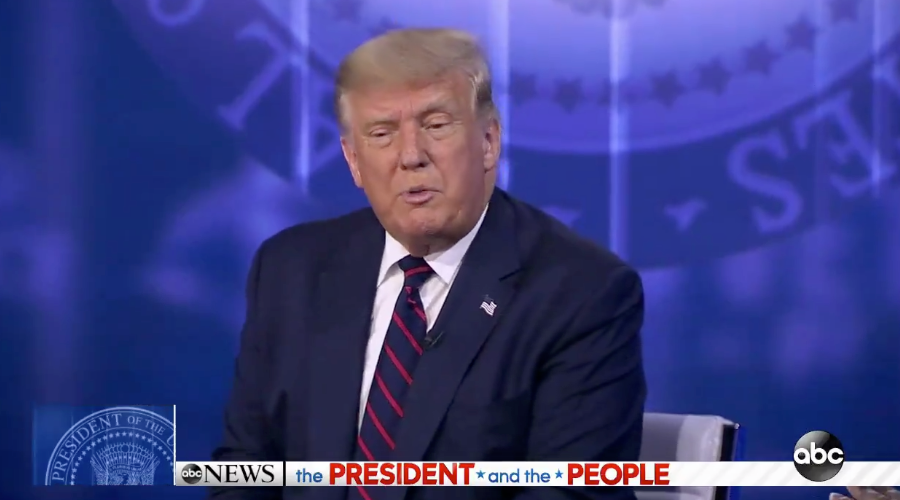 “Mr. President, I was born with a disease called sarcoidosis, and from the day I was born, I was considered uninsurable,” Blaque said. “That disease started in my skin, moved to my eyes, into my optic nerves, and when I went to graduate school, into my brain.” The Philadelphia resident went on to say that she pays roughly $7,000 a year on medical-related expenses.

After Blacque laid out the basis for her question, she challenged Trump to defend his record on striking down pre-existing conditions. But before she could get the complete question out, Trump butted in with a “No.”

Before he could go any further, Blaque stopped him in his place and said, “Please stop and let me finish my question, sir” before adding, “Should that [provision for pre-existing conditions] be removed, within a 36- to 72-hour period, without my medication, I will be dead.”

Though Trump petitioned the Supreme Court to fully overturn the ACA, he attempted to paint a different picture when responding to Blaque. He told the professor, “We’re going to be doing a health care plan very strongly and protect people with preexisting conditions,” though he never provided any specifics on how and when the plan, which has been talked about since before he took office, would actually come to fruition.

At the ABC News town hall Trump also danced around questions about his campaign slogan and his handling of the coronavirus. On the former, he told a Black man in the crowd that the “great again” period for Black Americans was six months ago, right before the pandemic. And on the latter, he suggested that he never downplayed the pandemic, though he said exactly that last week. Instead, he “up-played it.”