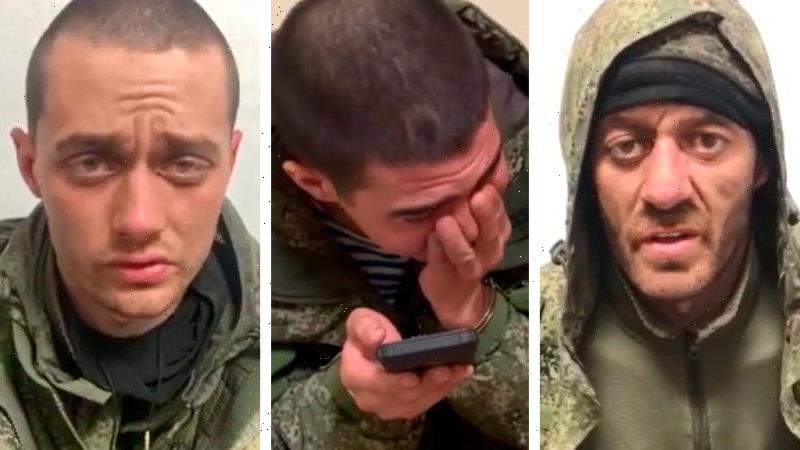 A young Russian soldier breaks down in tears as his mother pleads with him to come home from the other end of the telephone line. Handcuffed and dressed in his army fatigues, he buries his face in his hands and breaks out in a loud sob.

“I love you too,” he answers with a shaky voice. 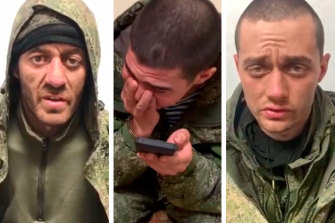 The unnamed soldier, who has been captured by Ukrainian forces, then urges his mother to speak to the families of other Russian soldiers, warning that “no one will get a death note” from Russian authorities if their sons are killed.

“Those f—ers are not taking away the bodies. They are killing the wounded,” he says. “I don’t know if they will be swapping prisoners of war.”

The footage is one of more than a dozen clips of captured Russian servicemen released by Ukraine authorities over the past week.

The videos often show handcuffed soldiers sitting on a chair in a nondescript room. Some show signs of serious injury, their heads bruised and patched up with bloody bandages. Others are dressed in civilian clothes and look unharmed.

In some clips, Ukrainian troops can be heard questioning the soldiers, who decry the atrocities committed on the front line of the war. But more often than not, the prisoners are filmed breaking down as they speak to their loved ones over the phone.

The soldiers are rarely identified and the footage, as well as the circumstances of the men’s arrest, are nearly impossible to verify independently.

Ukraine is using the blizzard of videos of confessions and emotional pleas for forgiveness to drum up support in their online campaign against Russia. Law enforcement authorities say the footage is a record of Russia’s brutal military campaign in Ukraine and are using it to back up their claims Putin is committing war crimes.

But the videos raise questions about whether Ukraine could be violating the Geneva Conventions, which set out the legal standards for humanitarian treatment in war, including the rights of wartime prisoners.

Article 13 of the treaties states: “Prisoners of war must at all times be protected, particularly against acts of violence or intimidation and against insults and public curiosity”. According to the International Committee of the Red Cross, this includes circulating images on social media.

The issue was brought to the fore last Tuesday AEDT when Ukrainian authorities paraded three battered Russian prisoners in front of TV cameras during a press conference organised by news agency Unian in Kyiv. It is unclear when the men were captured, but footage of two of the soldiers being interrogated in front of a Ukrainian flag emerged online as early as February 28.

Sporting a bruised face, two missing teeth, and an unkempt beard, a prisoner identified as Dmitri Astakhov told reporters he was ashamed of Russia’s actions and apologised to Ukrainians for bringing “sorrow to this land”.

During the ten-minute soliloquy, Astakhov said the Russians had been “brainwashed” by authorities and the media and urged his fellow servicemen to put down their arms.

“I’m begging you, stop before it’s too late,” he said.

Astakhov also pleaded with the Ukrainian forces to spare the lives of those surrendering, so they could return to their homeland and spread the word about the atrocities committed in Ukraine.

It is unclear whether Astakhov or any of the prisoners were under duress when they were filmed. Astakhov addressed the issue at one point during his speech by saying he was being “frank” in his remarks.

“For those who watch this video: you might think about me whatever you want. That I was forced, intimidated or the text was prepared in advance,” he said.

“I’ll give it to you straight: If someone came to my territory I would do the same these people did, and I would be right. And they are right, while I have to sit here and offer excuses.”

The videos are likely to be perceived as a provocation and an attempt to humiliate the soldiers by Russia, whose online propaganda campaign is proving to be far less successful around the world than Ukraine’s.