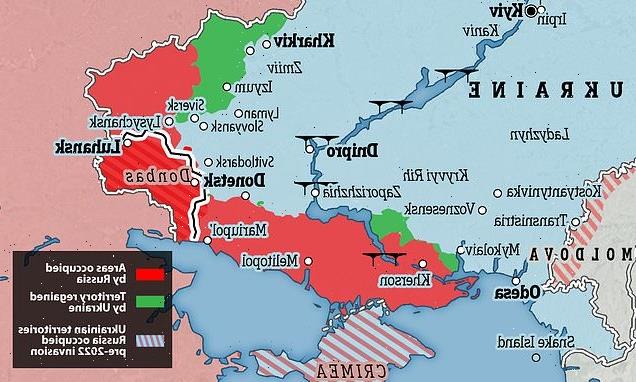 Ukraine will push Russia back to its pre-invasion border by the end of the year and retake Crimea next summer, a retired US general has predicted.

Ben Hodges, former commander of US forces in Europe, believes Ukraine is capable of re-taking thousands of square miles of territory in the south and east within the next two months before pushing into Crimea – the crown jewel of Putin’s 2014 war.

General Hodges, speaking in Westminster on Monday at an event hosted by the Council on Geostrategy, admitted his vision is ‘optimistic’ but confidently predicted that ‘Ukraine will win.’

In the meantime, he expects Putin to continue shelling Ukrainian power plants and cities with the aim of driving ‘hundreds of thousands of refugees’ into Europe with the aim of breaking Western support. 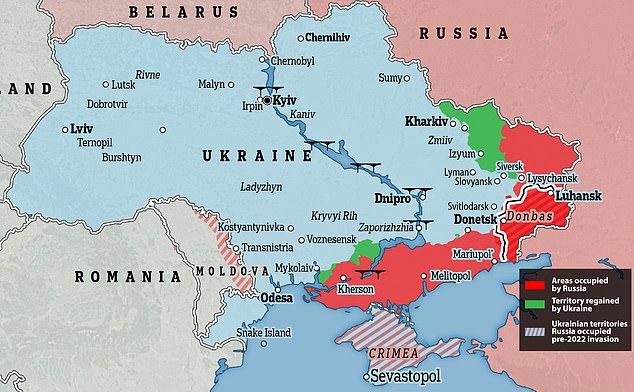 Ukraine will push Russia back to the pre-war border line (hash-marked areas of the map) by the end of the year and will re-take Crimea next summer, a retired US general has predicted

He said: ‘It is too early to plan victory parades, there is still months and months of hard fighting ahead, Russia will continue to kill innocent Ukrainian civilians, but there is no doubt in my mind that Ukraine has achieved irreversible momentum.

‘It is indisputable that Ukrainian soldiers have superior will over the Russian soldiers… [and] it is clear that after eight or nine months of war Russia’s logistical system is on the verge of collapse.’

Russia first invaded Ukraine back in 2014, when Putin marched in troops and occupied Crimea following a revolution that toppled the government.

Meanwhile Russian-backed groups went into the eastern Donbas region and occupied part of it, kick-starting a simmering conflict that continued until Putin re-invaded the country in February this year.

Since February, Russia has seized swathes of additional territory including the cities of Mariupol, Melitopol, Berdyansk and Kherson in the south, and most of the northern part of the Luhansk region.

Pushing Putin’s forces back to the 2014 borders within the next two months would mean re-taking all of those places, along with thousands of square miles of surrounding terrain.

Seizing back Crimea by next summer will require and extremely complex attack across marshland and islands that separate the peninsula from mainland Ukraine, against Russian occupiers who have spent years building defences.

The area – which is of huge propaganda importance to Putin – has often been likened to one giant military base, and the despot is expected to spare no resources to make sure it isn’t taken away from him.

But until then, General Hodges believes Putin will continue his tactic of shelling Ukrainian cities and power plants – even though he is running low on guided missiles and cannot replace them due to sanctions.

He added: ‘[This] is not just out of spite, it is intended to make Ukrainian cities uninhabitable as winter approaches.

‘What this is going to do, potentially, is put hundreds of thousands of Ukrainian refugees back on the road to Europe.

If they’re not able to find heat, and power, and if we’re not able to restore that it will cause problems in the rest of Europe. This is not lost on the Kremlin. 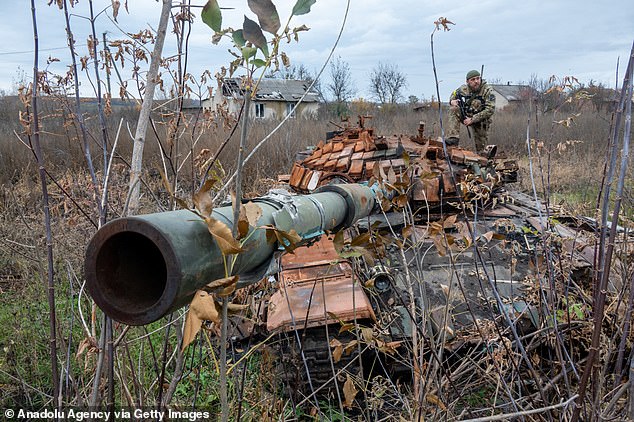 He also called on the US government to provide long-range ATACAMS missiles which can be fired from HIMARS launchers and would put all of Crimea within range.

Lastly, he says tracked vehicles – tanks and armoured vehicles with tracks instead of tyres – will be essential to keep Ukraine’s armies moving through autumn and winter as the weather turns wetter and the ground softens.

Russia is now into its ninth month of fighting in Ukraine and has failed to achieve any of the military objectives set by Putin at the start of the war.

That has led to growing dissent both within the Russian population and the elite close to Putin, who are increasingly willing to voice that discontent in public.

Yevgeny Prigozhin, the Wagner boss dubbed ‘Putin’s chef’, has publicly criticised the way the war is being run – though has stopped short of bashing Putin himself.

It remains vanishingly unlikely that Putin will be able to achieve his initial aim of toppling the government – and even the reduced aim of ‘liberating’ the Donbas region looks beyond his grasp.