LVIV/BORODYANKA, Ukraine (Reuters) – At least 39 people were killed and 87 wounded on Friday when two rockets hit a railway station in eastern Ukraine packed with evacuees, Ukrainian authorities said, as the region braced for a major Russian offensive.

Reuters could not immediately verify the information coming from the city of Kramatorsk.

Pavlo Kyrylenko, governor of the Donetsk region, said thousands of civilians had been at the station at the time the rockets struck, in what he described as a deliberate attack. Many of the wounded were in serious condition, he said.

"They wanted to sow panic and fear, they wanted to take as many civilians as possible," he said. Kyrylenko published a photograph online showing several bodies on the ground beside piles of suitcases and other luggage. Reuters could not immediately verify the photo.

The Russian defence ministry was quoted by RIA news agency as saying the missiles said to have struck the station were used only by Ukraine's military and that Russia's armed forces had no targets assigned in Kramatorsk on Friday.

Ukrainian President Volodymyr Zelenskiy said no Ukrainian troops were at the station. "Russian forces (fired) on an ordinary train station, on ordinary people, there were no soldiers there," he told Finland's parliament in a video address.

Moscow has denied targeting civilians since invading Ukraine on Feb. 24 in what it calls a "special military operation" to demilitarise and "denazify" its neighbour. Ukraine and Western supporters call that a pretext for an unprovoked invasion. 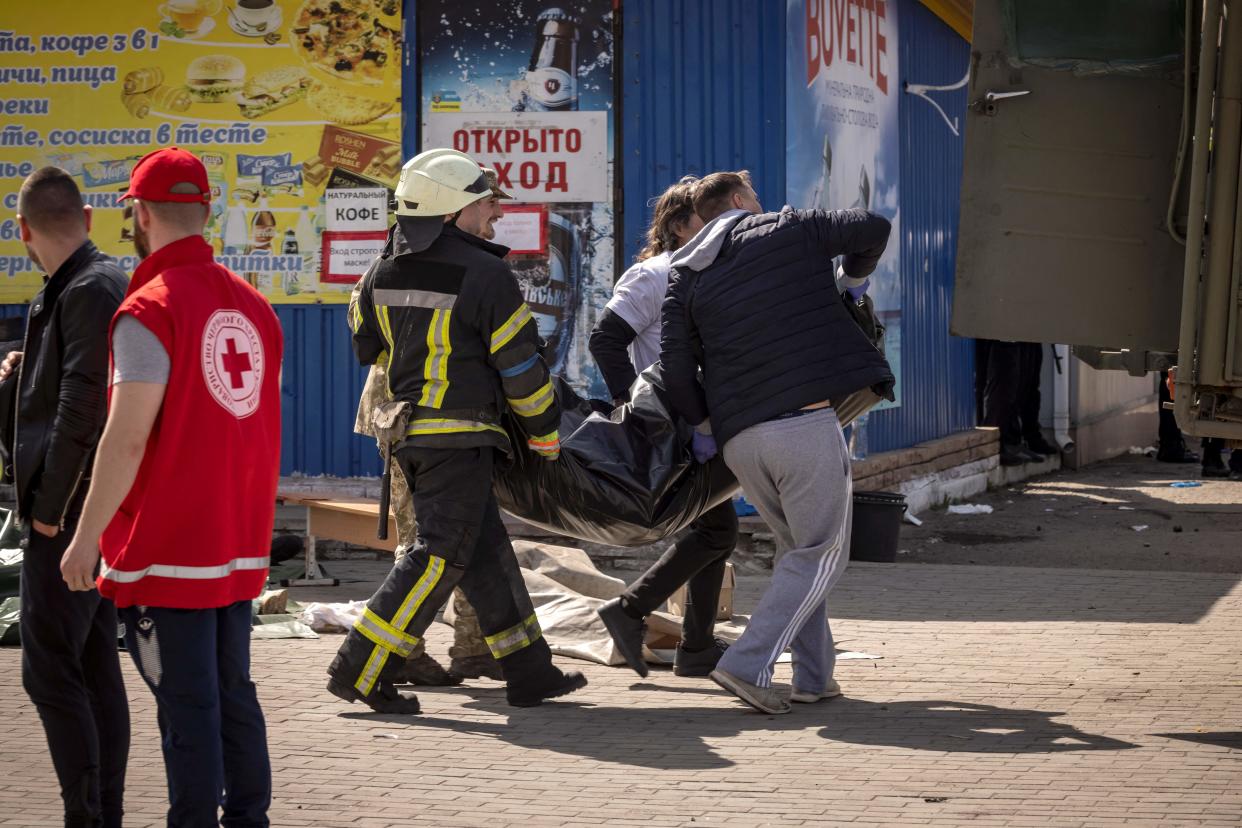 Ukrainian officials say Russia is regrouping forces after withdrawing from the capital Kyiv's outskirts for a new thrust to try to gain full control of the eastern regions of Donetsk and Luhansk partly held by Moscow-backed separatists since 2014.

Ukraine's military general staff said on Friday that Russian forces were focused on capturing the besieged southeastern port of Mariupol, fighting near the eastern city of Izyum and breakthroughs by Ukrainian forces near Donetsk.

European Union foreign policy chief Josep Borrell condemned the "indiscriminate attack" in Kramatorsk. "This is yet another attempt to close escape routes for those fleeing this unjustified war and cause," he said on Twitter.

While efforts continued to evacuate civilians from the east and south of Ukraine at risk of a Russian onslaught, residents of areas north of Kyiv recaptured from Russian forces were still coming to terms with the horror of a month-long occupation.

After civilian deaths in the town of Bucha were widely condemned by the West as war crimes, Zelenskiy said the situation in Borodyanka – another town northwest of Kyiv – was "significantly more dreadful."

He offered no further detail or evidence that Russia was responsible for civilian deaths in the town.

As rescue teams there searched through the rubble of a charred apartment block with its middle section razed to the ground, families looking for relatives watched.

"My mother, my brother, brother’s wife, his mother and father-in-law, are still there, as well as other people who were there in the basement," resident Vadym Zagrebelnyi told Reuters.

Russia has denied targeting civilians and says images of bodies in Bucha were staged to justify more sanctions and derail peace negotiations.

In Yahidne, a village north of the capital, residents recounted how more than 300 people were trapped for weeks by Russian occupiers in a school basement, with names of those who did not survive the harsh conditions or were killed by soldiers scrawled on the wall.

Russia's invasion has seen more than 4 million people flee abroad, killed or injured thousands, turned cities into rubble and led to sweeping sanctions that Moscow says put its economy in the most difficult situation in three decades.

On Friday, Britain joined Washington in blacklisting President Vladimir Putin's daughters, while Borrell and the head of the EU executive Ursula von der Leyen were due to meet Zelenskiy in Kyiv to offer financial and moral support.

The bloc on Thursday signed off another round of sanctions including a coal embargo with a 120-day wind-down period sought by Germany, and has said it will look at banning oil imports next.

Still, Ukraine continues to plead for more military support from its allies and a total ban on Russian oil and gas imports.

"Ukraine needs weapons which will give it the means to win on the battlefield and that will be the strongest possible sanction against Russia," Zelenskiy said in a late Thursday video address.

"We have significant losses of troops," Kremlin spokesperson Dmitry Peskov told Sky News. "It's a huge tragedy for us."

Ukraine's prosecutor general, Iryna Venediktova, said that in the Kyiv region, which includes Borodyanka, Bucha and other towns and villages such as Irpin, authorities had found 650 bodies, with 40 of them children.

Ukraine's prosecutors said 169 children had been killed and 306 wounded in the country since the start of the invasion.

Bucha's mayor has said dozens were the victims of extra-judicial killings carried out by Russian troops. Reuters could not independently verify those figures.