London: British police arrested 10 people at an anti-lockdown demonstration in central London on Saturday and four officers were hurt during scuffles, including two who required hospital treatment, they said.

Several British police officers were hurt on Saturday when they ordered thousands of protesters at a central London anti-lockdown demonstration to disperse after they failed to respect social distancing. 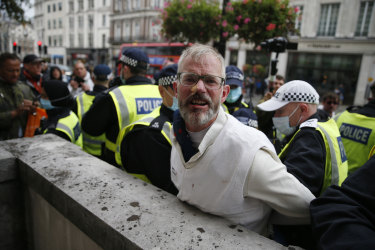 A man is arrested by police officers during a “We Do Not Consent” anti-lockdown rally at Trafalgar Square in London.Credit:

Holding signs saying "We Do Not Consent" and "Stuff the Stupid Rules", thousands of people had gathered in Trafalgar Square to protest against the coronavirus pandemic restrictions.

The Metropolitan Police said the protest had to end because demonstrators had failed to socially distance, or wear masks meaning it was no longer exempt from the national rules that limit gatherings to six people.

"We want to be clear, this protest is no longer exempt from the regulations," the Met said on Twitter. "We are asking those attending to disperse. Sadly, some officers have been injured while engaging with people."