Two weeks’ worth of rain are set to hit parts of the UK today, with 45mph gale-force winds ahead of thundery showers tomorrow as the Met Office issues fresh weather warnings for Saturday and Sunday.

Soggy September is continuing as flood alerts and rain are forecast for the rest of the week, with meteorologists  issuing wet weather warnings throughout the weekend.

Commuters were pictured struggling to keep dry as they made their way through London today and resorted to covering their head with newspapers and wearing umbrellas as hats. 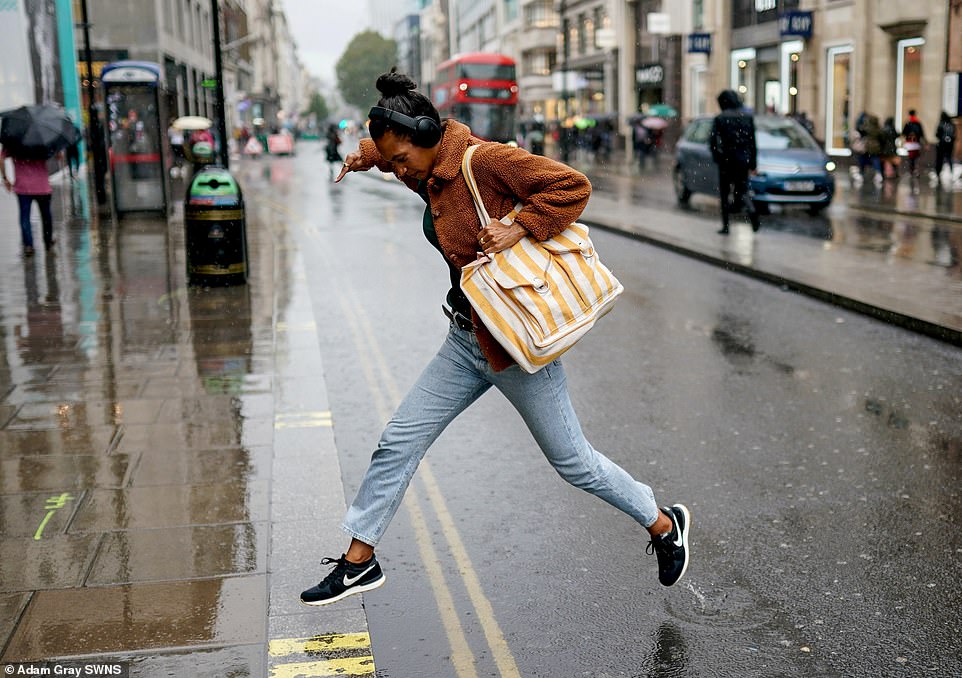 Pictured: A woman leaps over a puddle as rain hits Oxford Circus in central London. Soggy September is set to continue this weekend as downpours are expected to hit the country, with flooding forecast in the north-west, West Midlands and the south-west of England as well as Wales 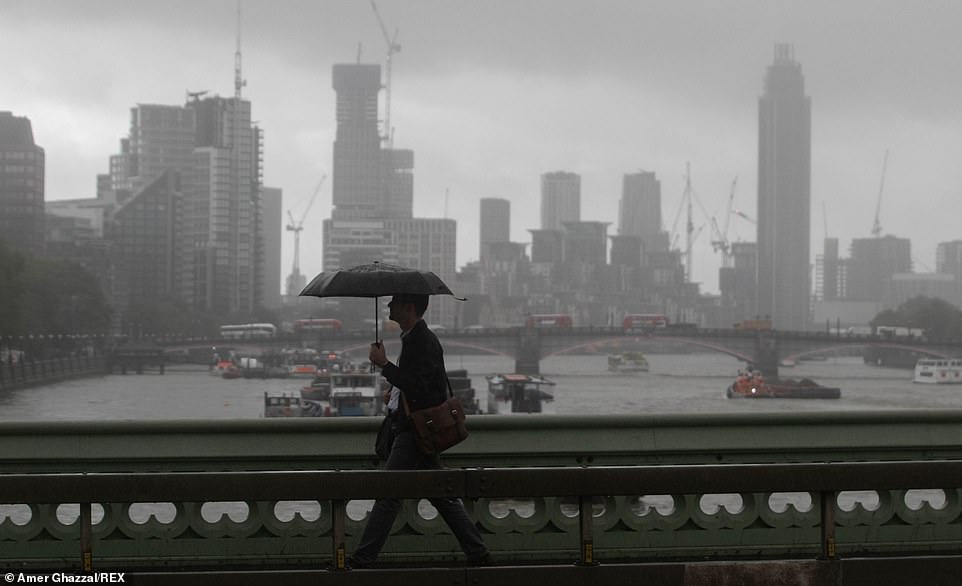 Commuters faced a drizzly start to the day this morning as they made their way to work under grey skies and a heavy downpour. Pictured: A man shelters underneath an umbrella as he makes his way across Westminster Bridge in central London, where pedestrians were caught in the rain 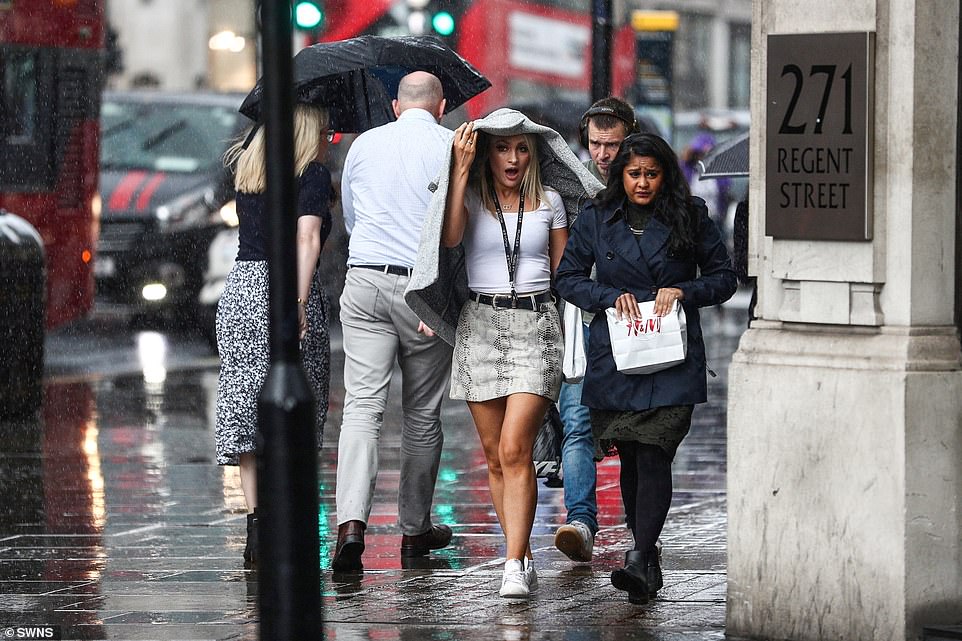 Grey skies poured rain on workers in Oxford Circus, central London, today, where people huddled under their coats to avoid getting drenched 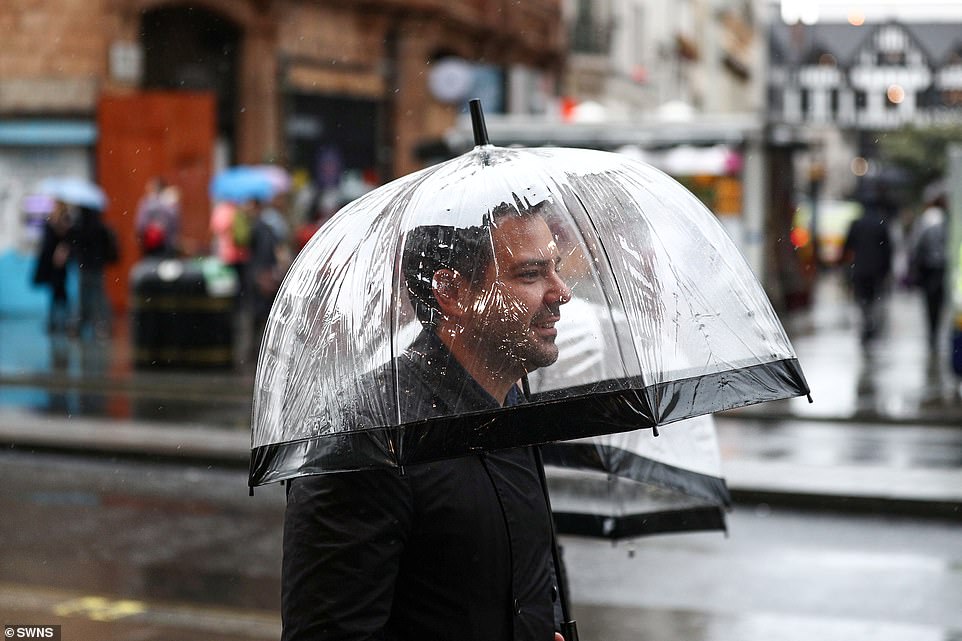 Pictured: A man wears his see-through umbrella as a hat as he makes his way through a rainy Oxford Circus in central London amid downpours today. Though conditions in the capital are set to improve this afternoon, the rest of the country will be battered by showers and thunderstorms 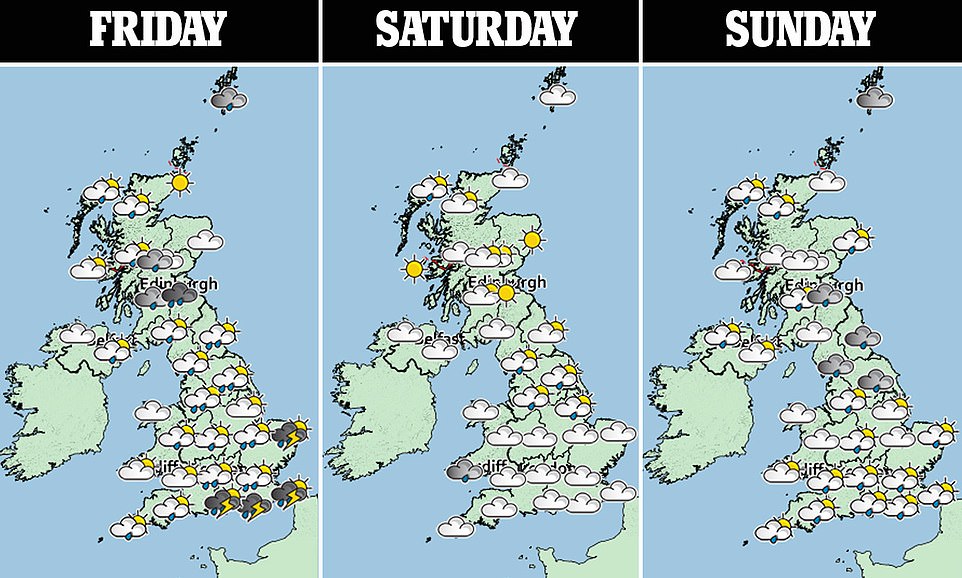 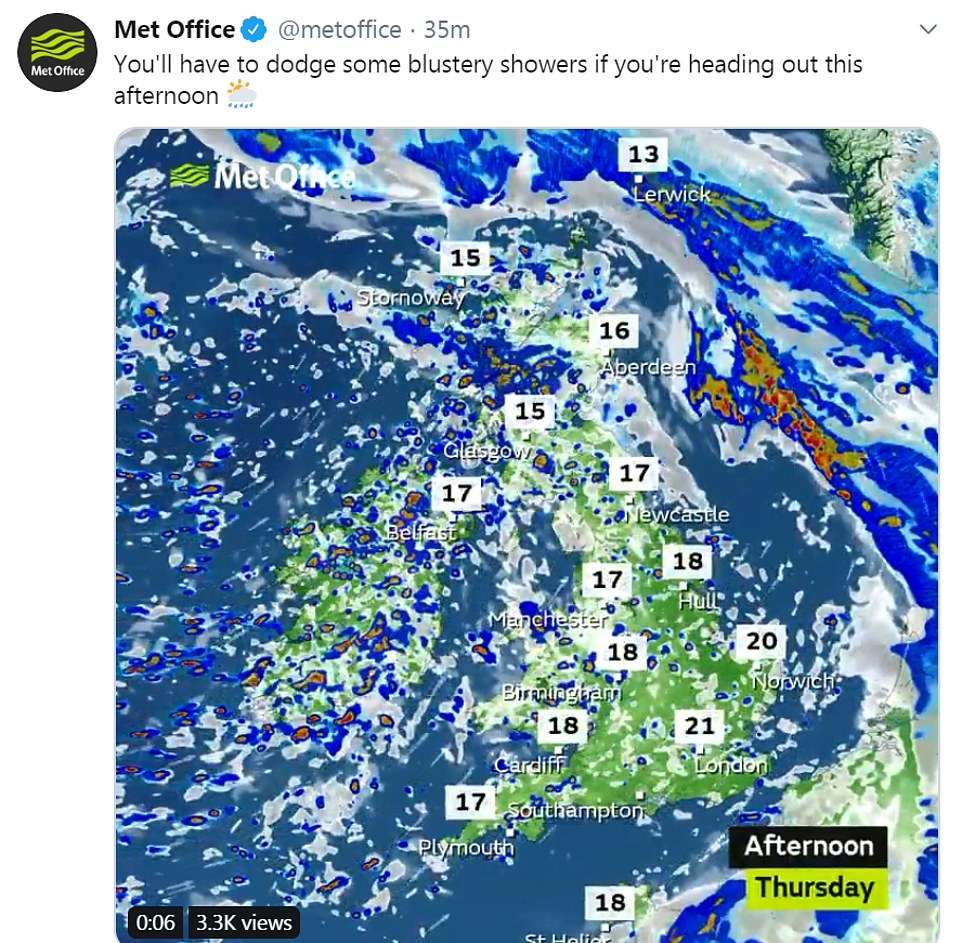 Blustery showers will be widespread across the UK this afternoon, with the worst-affected regions lying in the Scottish Highlands.

Things are set to worsen across Britain heading into this evening, when the capital and the south-east will escape the worst of the downpours. Manchester and Belfast, as well as the north of Wales, are expected to be wet.

Highs of 70F (21C) are set to hit the capital today, with conditions staying muggy, but Stornoway will see highs of just 59F (15C). 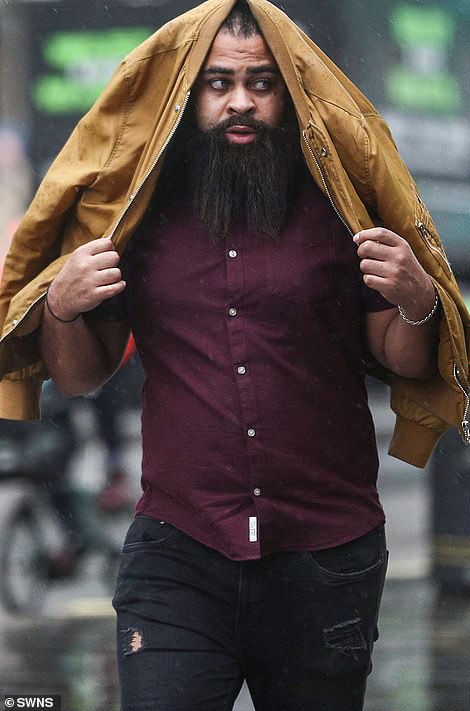 People caught in the rain in the capital today were forced to shelter under their jackets (right) and protect their eyes from the downpour (left). Pictured: Oxford Circus in central London today, where downpours drenched commuters 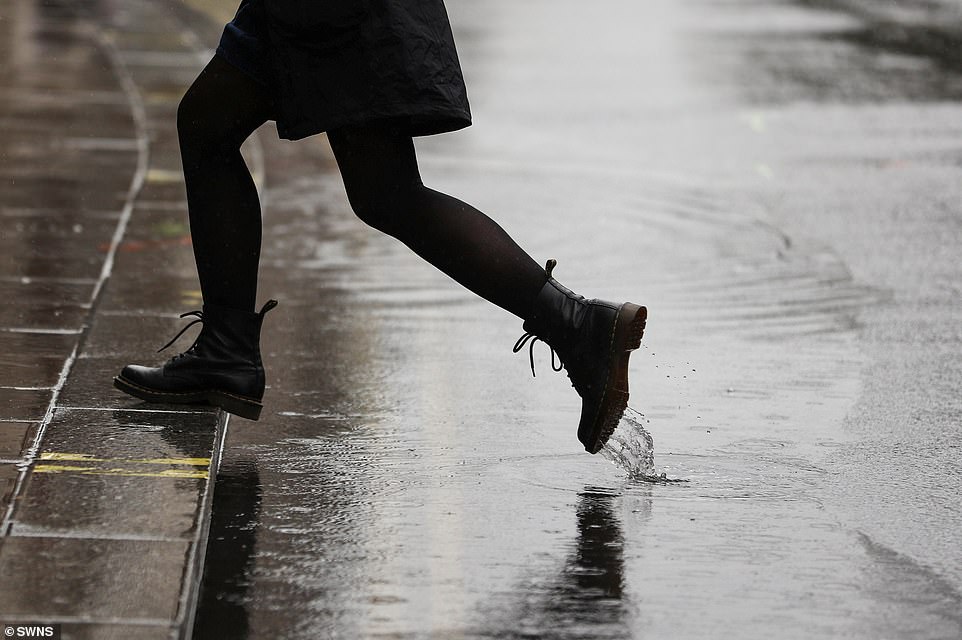 Puddles plagued Oxford Circus in central today, where people were forced to leap over pools of water amid a downpour that drenches commuters

The West Midlands as well as Cardiff and East Yorkshire will have highs of 64F (18C) and the south-west will hover around 63F (17C).

But tomorrow will see thundery showers as the UK prepares to be battered by stormy weather. Heading into the weekend, heavy rain is forecast for the western regions of the UK, drenching Wales, the north-west and south-west of England, and Northern Ireland. 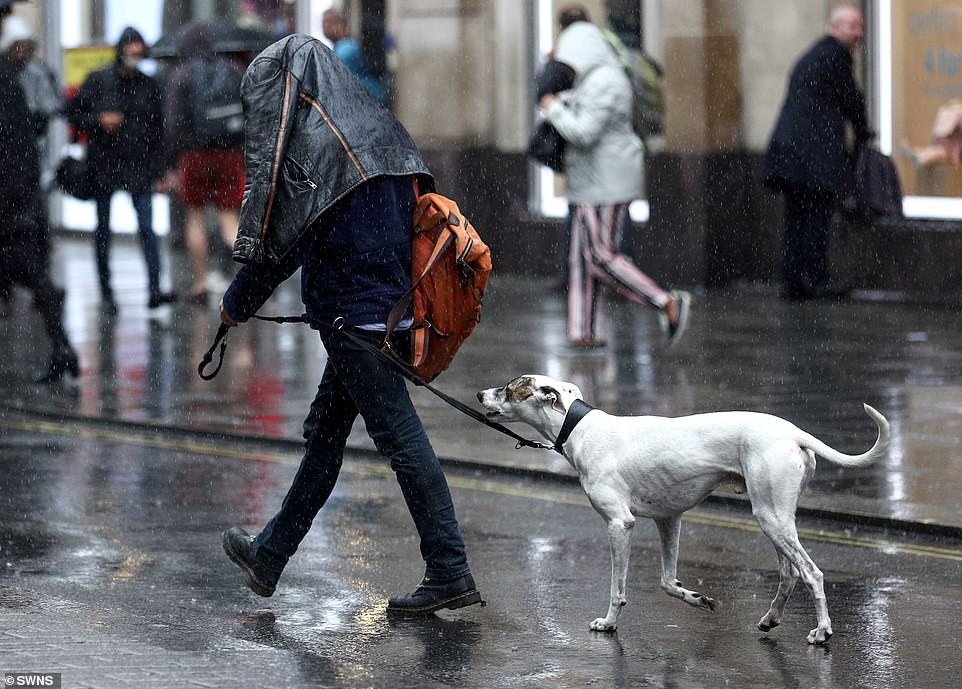 Pictured: A dog gets drenched in Oxford Circus, central London, today as his owner shelters under a coat while rain batters pedestrians as Soggy September continues in the capital, with the rest of the country expected to suffer in the coming days 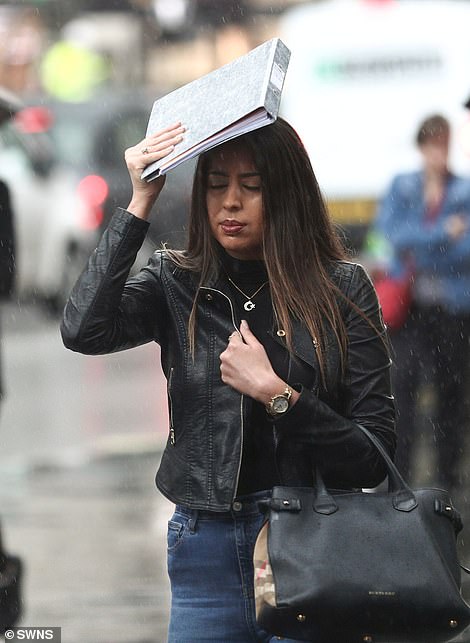 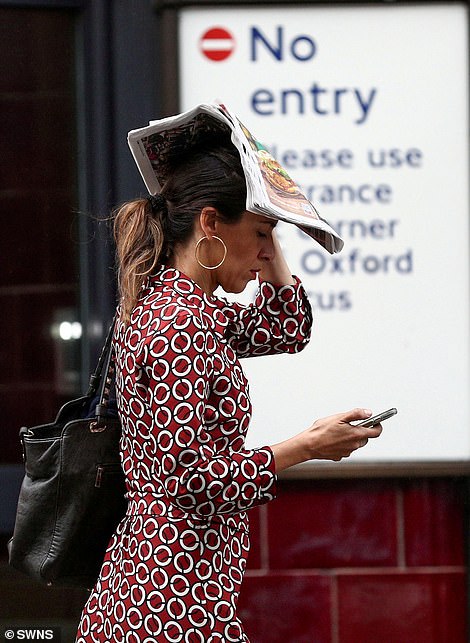 Pictured: Women cover their heads in Oxford Circus, central London, today as they struggle to keep dry amid the downpours that battered the capital 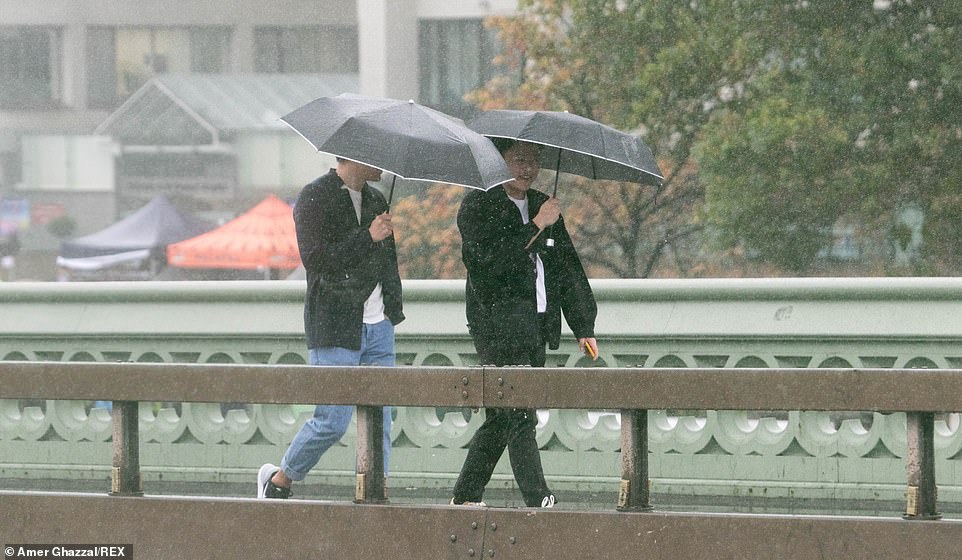 Pictured: Pedestrians make their way across Westminster Bridge covering their heads with umbrellas as showers batter the capital today 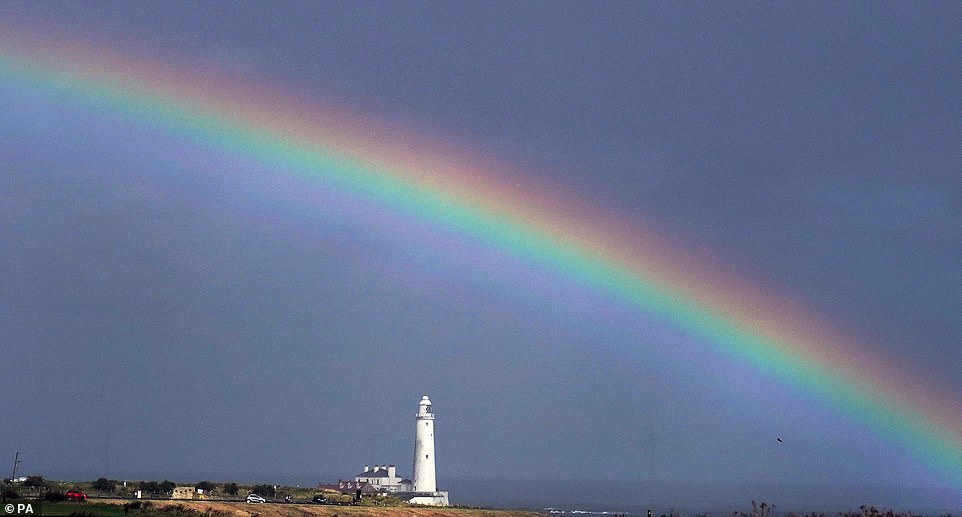 Pictured: A rainbow over St Mary’s Lighthouse in Whitley Bay in the north-east of England, which is set to be battered with wet weather tomorrow and heading into the weekend 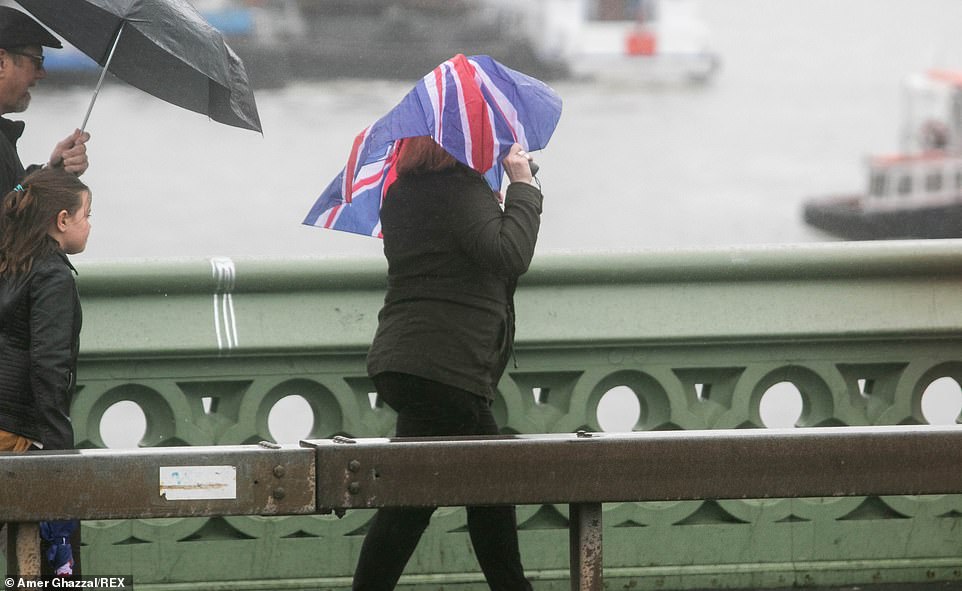 A woman is pictured sheltering under a broken umbrella bearing the Union Flag as 45mph gales batter the capital as commuters made their way across Westminster Bridge (pictured) in central London. Conditions across the country are set to worsen this afternoon and heading into the weekend

Anybody looking to get away for the weekend travelling to or from those areas is expected to face disruption on the roads, meteorologists warned today.

The Met Office warned on Twitter that the downpours will also cause flooding, with 1.6 inches (40mm) or rain expected in the worst-hit regions.

A yellow weather warning – meaning ‘severe’ – is in place throughout the weekend, stretching from Greater Manchester, through portions of Cheshire and across Wales.