Part of the South Gippsland Highway has re-opened this morning after a horrific crash killed a woman and a young boy who were in a stationary car.

Police say the pair, who were in a black sedan, were waiting to turn right on the highway at Korumburra about 3.30pm on Friday when it was hit from behind by a car. 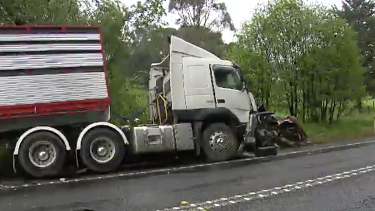 The truck, transporting cattle, hit the black sedan when the car was pushed into its path.Credit:Nine News

A 59-year-old man from Bass, who was behind the wheel of second vehicle involved in the crash, was in custody on Friday evening, and the truck driver was speaking with police.

The department of transport re-opened the South Gippsland Highway between Korumburra and Leongatha early on Saturday morning.

Anyone who witnessed the crash or with dashcam footage is urged to contact Crime Stoppers on 1800 333 000 or to submit a confidential report at www.crimestoppersvic.com.au .

To go gray, or not to go gray, that is the question. As natural beauty has battled its way into mainstream...