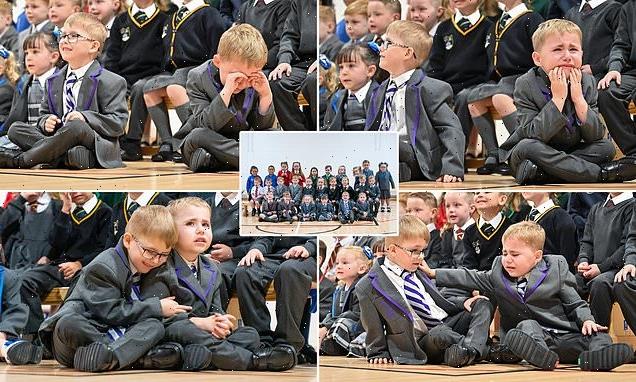 Smartly dressed in their new ties and blazers, these young pupils are lucky enough to already have one friend when they start school – their twin.

But as Cory Keeney and brother Dean, five, proved, there’s always time for a brotherly falling out.

The boys, from All Saints Primary School in Greenock, Inverclyde, were posing for a photoshoot with their fellow 12 sets of twins when little Cory got upset.

He was seemingly inconsolable, even shoving his brother away when he tried to comfort him.

But before long, as is so often the way with siblings, they were friends once again. Dean put an arm around his brother and the pair made up.

The Scottish council area has been dubbed ‘Twinverclyde’ due to the unusually high number of twins born there. 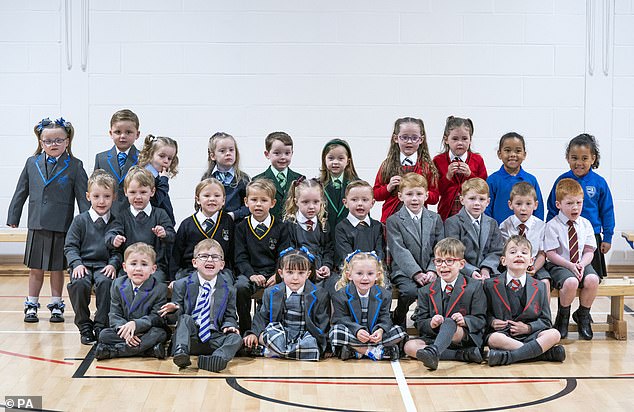 13 sets of twins (above) met at St Mary’s Primary in Greenock, Scotland to show off their uniforms to parents. The area has been dubbed ‘Twinverclyde’ due to the unusually high number of twins born there 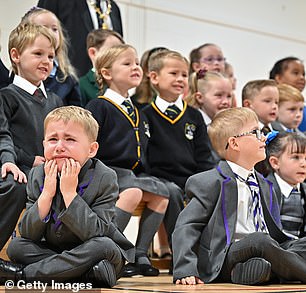 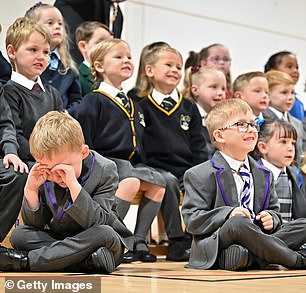 There are 15 sets starting primary school on Wednesday – the second highest count ever. The record was set in 2015, when 19 pairs started school.

Yesterday, 13 sets met at St Mary’s Primary in Greenock to show off their uniforms to their parents.

Provost Martin Brennan, also Inverclyde Council’s vice-convener of education, said: ‘As a former teacher myself, the return to school is always an exciting time for pupils, parents and staff.

‘But it’s taken on greater significance this year following the disruption caused by the coronavirus pandemic over the last 18 months.

‘While many of the safety rules will remain in place in schools for the time being, it’s just great to be celebrating the return to the classroom, including here at St Mary’s Primary in Greenock which is the latest new or refurbished school completed as part of our £270 million schools estate transformation. 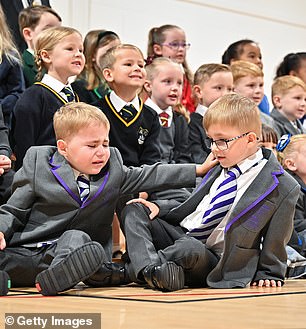 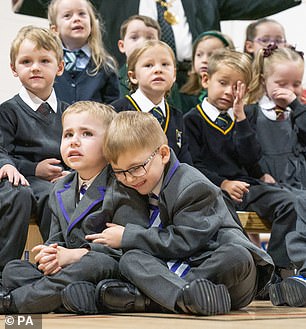 All’s well that ends well: Despite a bit of shoving (left), the siblings lovingly embrace (right) after a brief battle

‘I wish all the children – and of course our education staff – all the very best for the start of the new term next week.’

Joe Mcallister, whose twins will head to Gourock Primary for the first time on August 18, told the PA news agency he is excited for the children to start as it will ‘be really good for them’.

Another set of pupils starting P1 are Eloise and Charlie, who will go to Ardgowan Primary School.

They said they are looking forward to ‘meeting friends’ and playing football.