Scores of people were killed and many more were injured or unaccounted for when a tsunami hit the island nation of Indonesia without warning Sunday following a volcanic eruption and underwater landslides miles offshore.

At least 281 people died, more than 1,000 were injured and another 57 are missing as the wave came crashing ashore on the northwest coast of Java, one of the large islands comprising the country, according to Sutopo Purwo Nugroho, head of public relations for the Indonesian National Disaster Mitigation Agency.

The number of dead and injured are both likely to rise, officials said on Sunday. 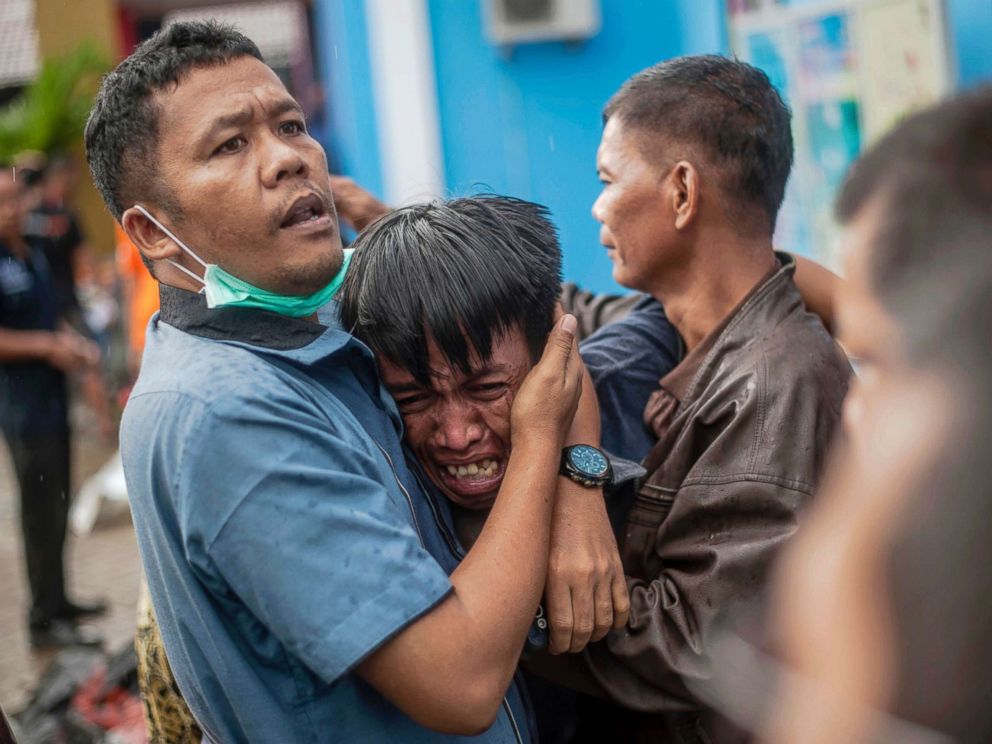 Nugroho said at least 430 houses and nine hotels were destroyed or badly damaged in the tsunami.

The tsunami was likely due to underwater landslides that came on the back of the eruption of the Anak Krakatau volcano in the Sunda Strait, about 60 miles off the coast of Java, Indonesia’s Meteorological, Climatological and Geological Agency said. The tsunami struck 24 minutes after the volcanic eruption. 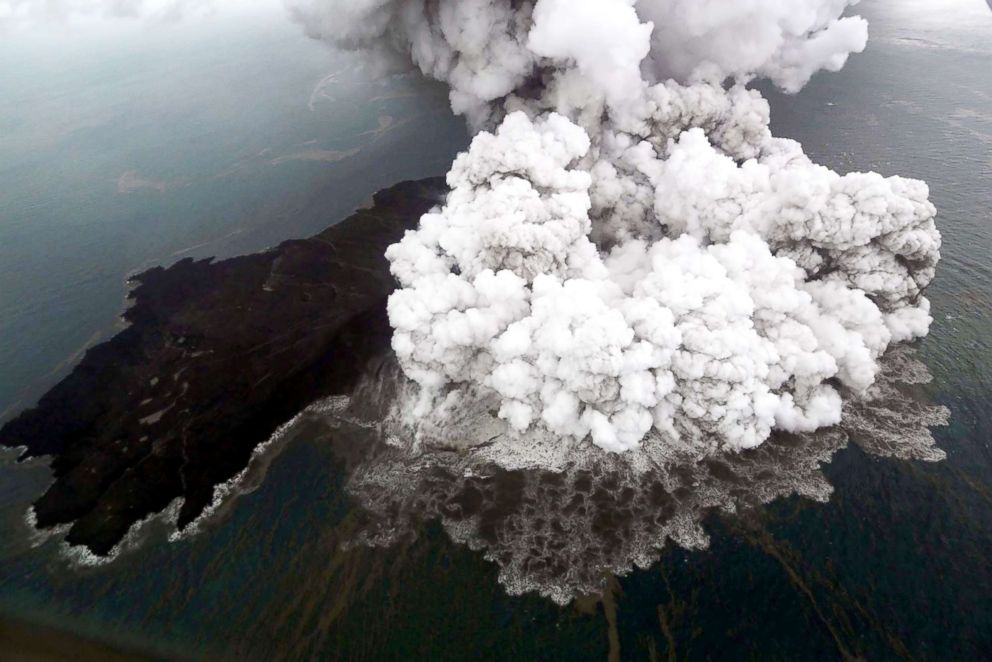 The Krakatau volcano is part of the spawling, horseshoe-shaped natural disaster zone dubbed the “Ring of Fire”. The zone stretches 25,000 miles from New Zealand up through Indonesia, the Philippines and Japan, and then across the Aleutian Islands and down the coasts of Alaska, Canada, the West Coast of the United States and all the way down to the tip of South America.

In one dramatic scene caught on video, the Indonesian pop band “Seventeen” was on stage performing at the Tanjung Lesung beach resort near the tip of Java when a wave of water plowed into the stage and washed the band members into the audience. 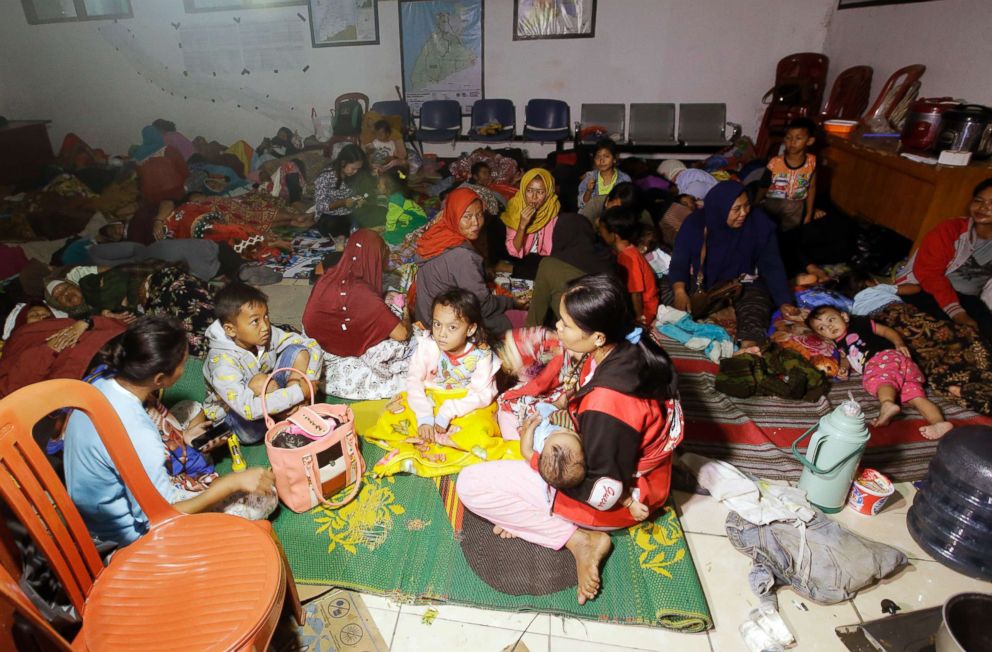 In an emotional video posted on Instagram in the aftermath of the tsunami, Riefian Fajarsyah, the lead singer of “Seventeen,” said the band’s bass player and manager were killed. He said the group’s lead guitar player, drummer and a crew member were missing.

“Please pray so that my wife Dylan [Dylan Sahara] will be found soon,” said Frajarsyah, sobbing.

“More than two hundred dead and nearly a thousand injured or unaccounted for. We are praying for recovery and healing. America is with you!” Trump tweeted.

Speaking to a gathering of pilgrims at the St. Peter’s Square at the Vatican, Pope Francis asked the world to pray for the victims of the Indonesian catastrophe.

“My appeal is that these brothers and sisters may not lack our solidarity and the support of the international community,” the pope said. 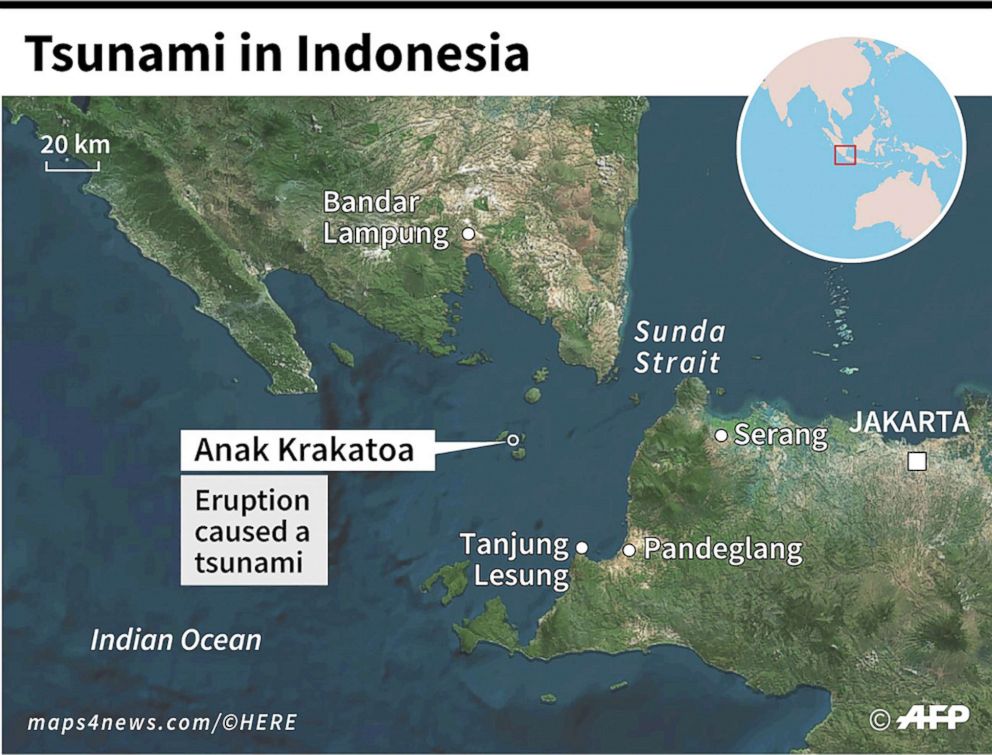 Pandeglang, Serang and South Lampung on the island of Java were the hardest-hit regions, according to authorities. The regions are a few hours west of the capital city of Jakarta with its population of almost 10 million people.

The most affected area was the Pandeglang region of Banten province in Java, which includes Ujung Kulon National Park and surrounding popular beaches. Of the deaths, 33 were in Pandeglang.

Video footage from the disaster zones showed hundreds of homes in ruins and vehicles that had been tossed about like toys dotting the wreckage. 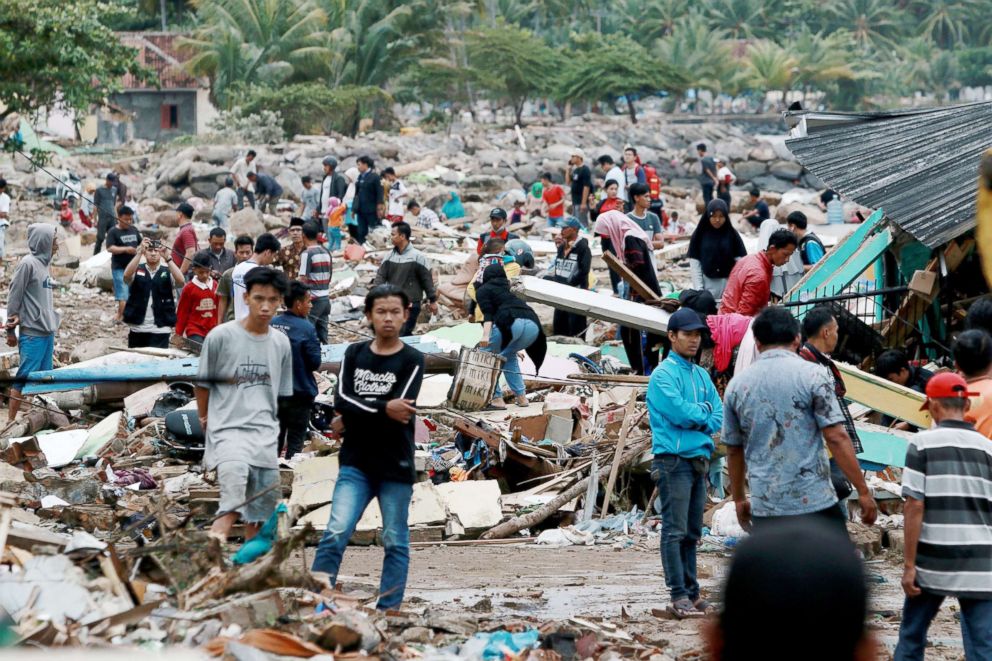 A team of police officers combing collapsed buildings in a village north of Labuham on the northwest coast of Java island saved a 5-year-old boy found buried in the rubble. A video showed officers pulling the boy from a collapsed structure and carrying him to safety as he broke into tears.

Kathy Mueller of the International Federation of Red Cross and Red Crescent Societies told ABC News that her organization mobilized teams to help in the search-and-rescue effort and to treat and help those saved. 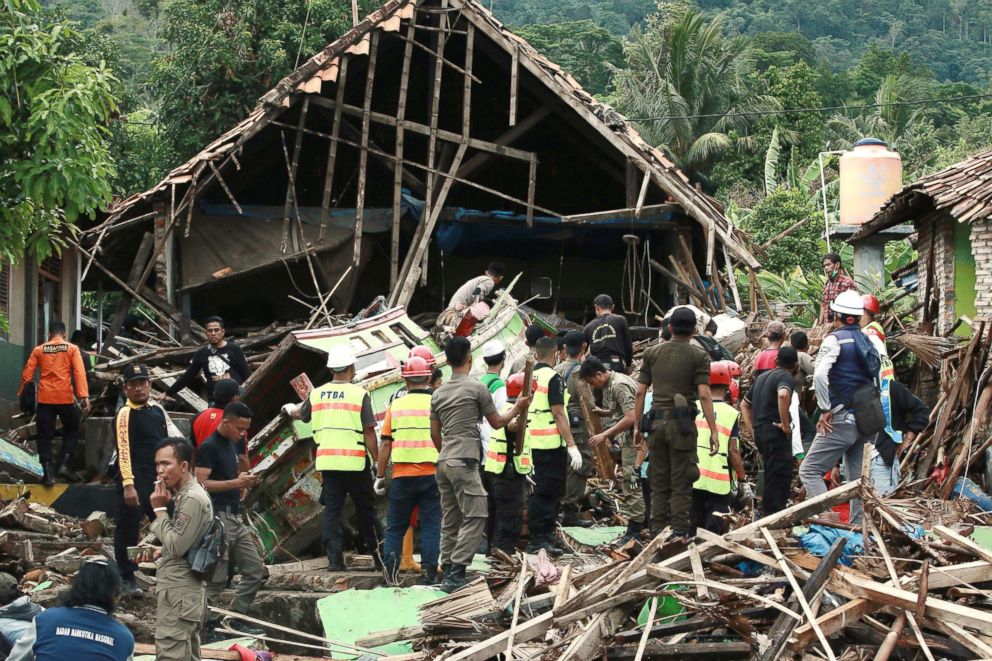 She said the rescue effort was being hampered by damage to main roads leading to and from the hardest hit areas. 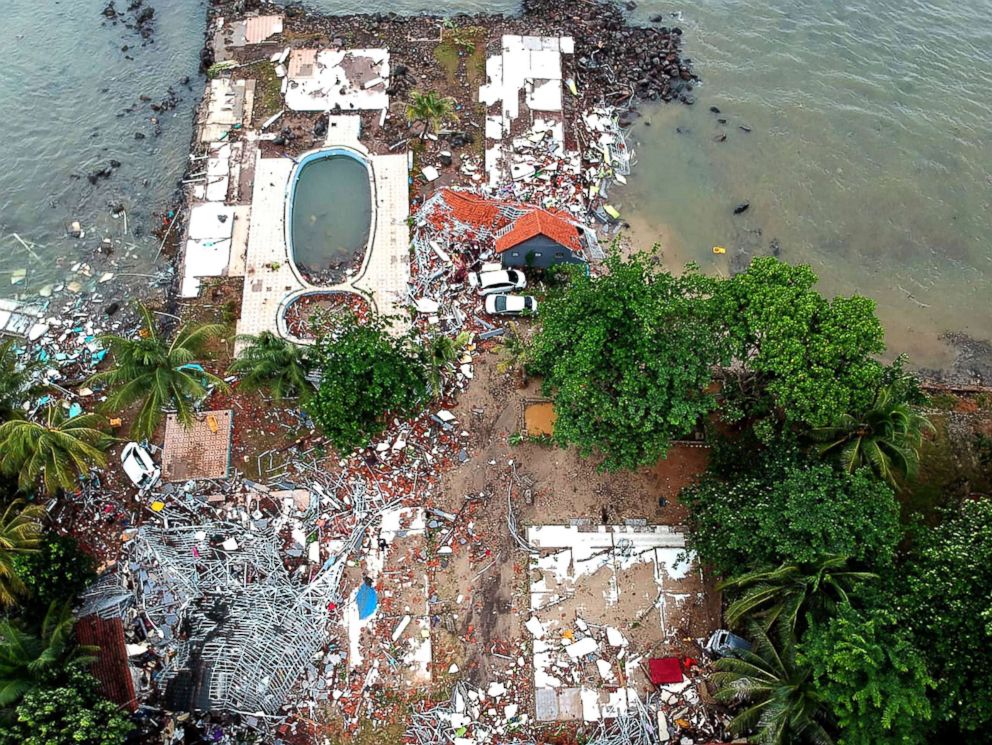 “And, of course, it’s also the rainy season so people whose homes have been destroyed or damaged, they may not have structures to sleep in tonight so … we’re bringing in things like tarpaulins to help provide at least some makeshift shelter,” said Muller, adding that this is the third major natural disaster to hit Indonesia since late July.

She said many of those being treated in hospitals suffered cuts and scrapes. 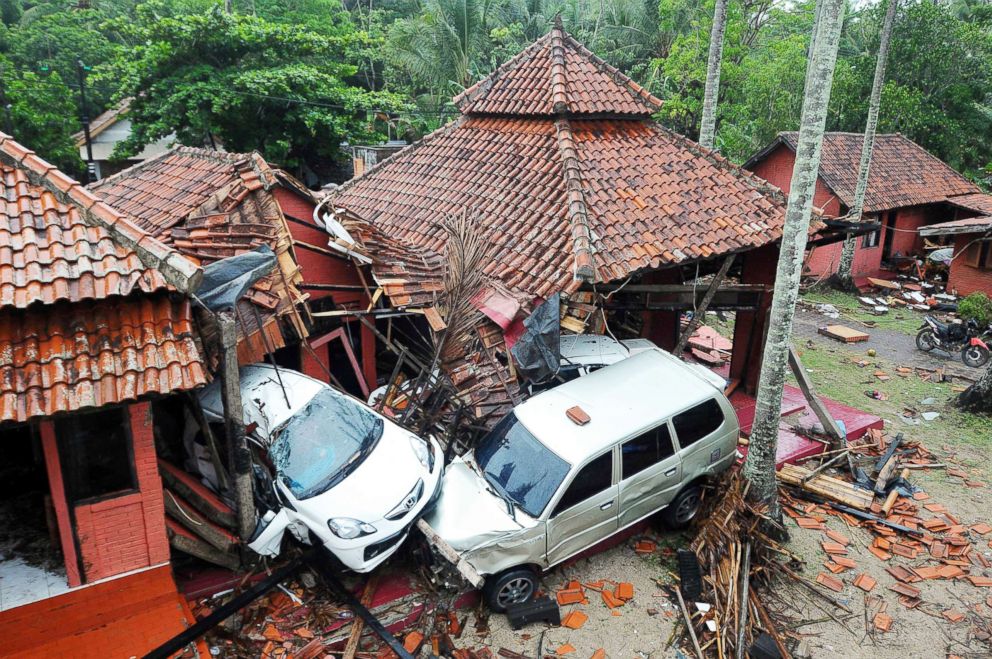 “I want to express my deep sorrow for the victims in Serang, Pandeglang and Banten Province,” Indonesian President Joko Widodo said in a statement translated from Indonesian, according to The Associated Press. “May those who are left be patient.” 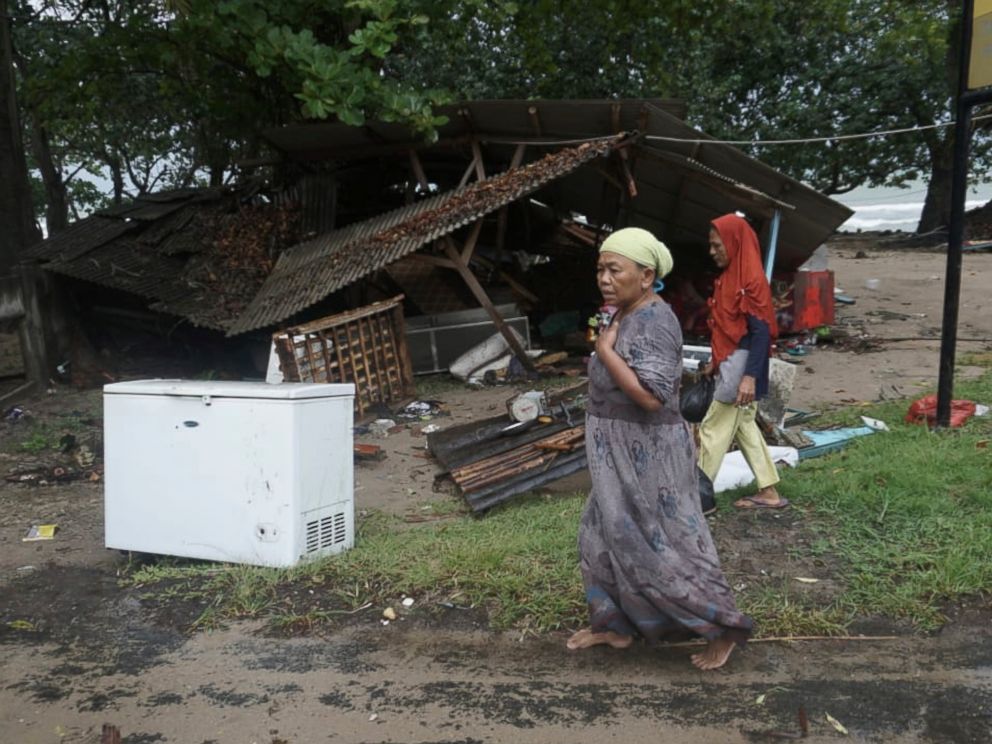 Krakatau, a volcano located between the islands of Java and Sumatra, is known for the historic eruption in 1883 that blew the island apart and killed 30,000 people. It has erupted regularly since.

Prior to Saturday, Anak Krakatau erupted on Oct. 15. 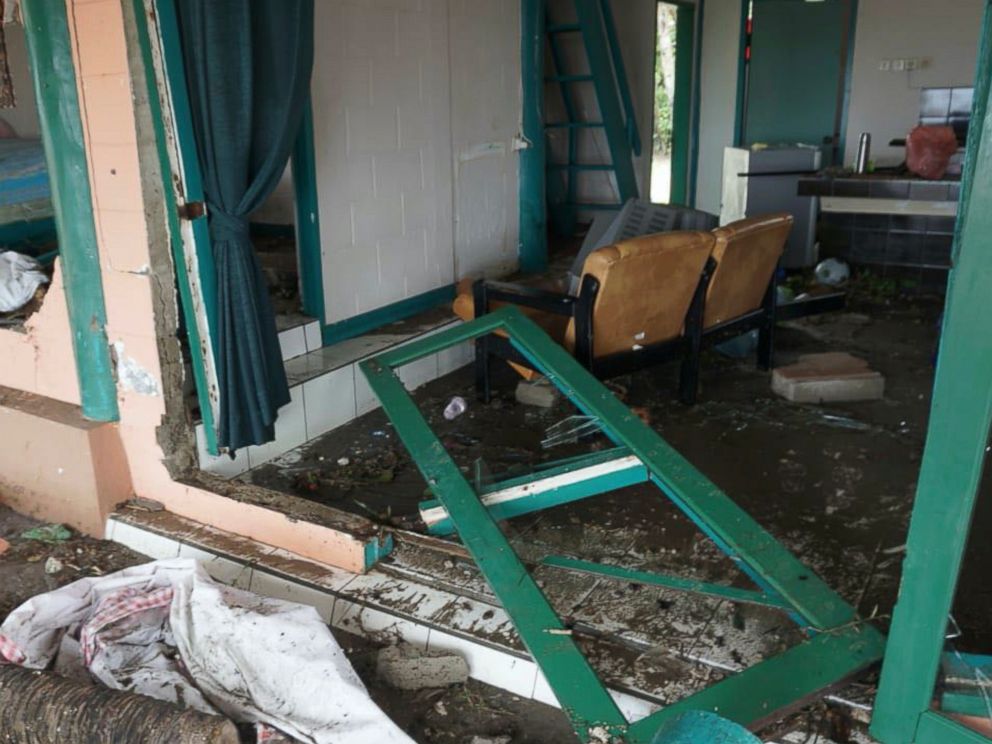 Indonesia was struck by a massive earthquake and tsunami in late September. The disaster hit Sulawesi, an island hundreds of miles northeast of Java. The disaster killed over 2,000 people and displaced 70,000 more.