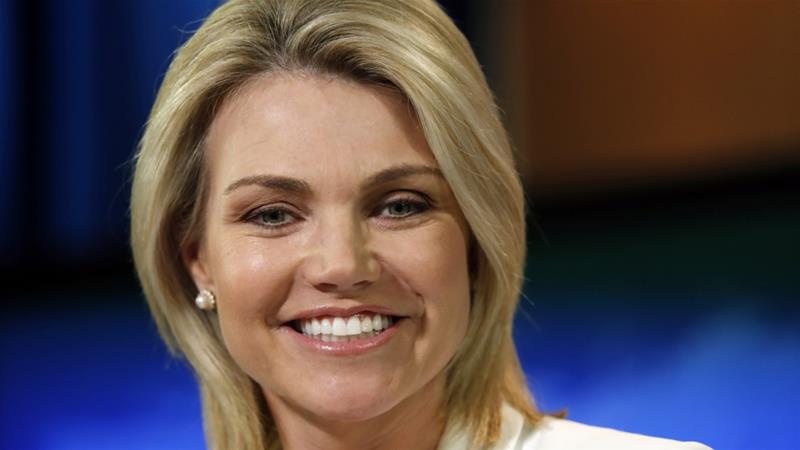 President Donald Trump is expected to nominate State Department spokeswoman and former Fox TV news anchor Heather Nauert as US ambassador to the United Nations, according to multiple reports.

Nauert, whose nomination would require Senate confirmation, became the State Department’s spokeswoman in April 2017 and was named earlier this year as the acting undersecretary for public diplomacy and public affairs.

If confirmed, Nauert, 48, would succeed Nikki Haley, who said in October she would be leaving the UN post at the end of the year.

She has been touted for the post since November.

The State Department declined to comment and Nauert did not immediately respond to a request for comment.

James Warren, the executive editor of NewsGuard, said Nauert was an “unconventional” pick.

“When one looks at the history of UN ambassadors going back to the 1950s, you had people like Adlai Stevenson, who was the Democratic Party nominee for president twice, George HW Bush. You had rather prominent public intellectuals like Daniel Patrick Moynihan, the US Senator for New York, and a small group of women, who include Madeline Albright and Nikki Haley … So on that level, Nauert’s pick is notable,” he told Al Jazeera.

“On another level, it’s easily explained by Trump’s fascination with American cable news, and in particular with Fox Cable News Network,” the former Washington Bureau Chief for the Chicago Tribune said.

“And one of his favourite shows is the popular morning show, Fox and Friends, and Nauert was associated with this show for several years, and that surely had something to do with her selection.”

The New York Times said Nauert is just the latest Fox News personality to be recruited or elevated by Trump.

He had previously named John Bolton, a former UN ambassador who was a Fox contributor, as his national security adviser and Bill Shine, a former Fox co-president as his deputy White House chief of staff in charge of communications, the newspaper reported.

Nauert will face a variety of challenges if confirmed for the job, including championing US efforts to contain Iran’s influence in the Middle East and ensuring the global body maintains tough sanctions on North Korea, as Washington tries to negotiate an end to Pyongyang’s nuclear and missile programs.

Trump has been critical of the UN, complaining about its cost to Washington and criticising it for focusing on bureaucracy and process rather than results.

He pulled the US out of the UN human rights body in September, citing bias against Israel.  His administration has also cut funding to the UN agency for Palestinian refugees, while last year it proposed to cut US funds for aid and diplomacy, which could curb the work of the global body.

But Trump has also used the UN to try to advance his foreign policy agenda on Iran and North Korea.

The administration has also worked through the UN to try to find a political solution to the wars in Syria and Yemen, two issues that will confront Nauert if she is confirmed.