Has anyone noticed? Why are we still governed by stale, pale males – grown-up private school boys in pin-striped suits?

Across the ditch, in New Zealand, the centre-left government led by Jacinda Ardern has just installed a ministry that bristles with firsts. Grant Robertson the deputy PM is proudly gay, as are 15 per cent of all the ruling party MPs. But wait, there’s more … 40 per cent are women, 25 per cent are Maori and 15 per cent Pacifica. Ms Nanaia Mahuta, the new Foreign Minister, is a Maori elder sporting the sacred facial tattoo called a “moko”. 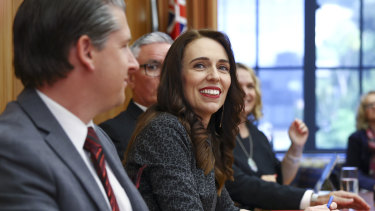 Jacinda Ardern speaks to her MPs at Parliament in Wellington.Credit:Getty Images

One backbencher, Ibrahim Omer, arrived in NZ from Eritrea after five years in a refugee camp – one of those we repel and imprison to appease racists in marginal electorates who decide government on this side of “the ditch”. His maiden speech last week was greeted with a standing ovation in the parliament. The NZ Greens include Ms Golriz Ghahraman, a human rights lawyer who was an Iranian child refugee. These success stories are celebrated in NZ.

Do I need to dwell on the ascension of Kamala Harris, the Vice-President-elect of the US, of Indian and Jamaican parentage? Mind you, to counter that there are several QAnon followers within the just-elected Republicans ranks. Go figure.

In Canada, Chrystia Freeland the Deputy PM has the singular negative of having been a journalist in her pre-political life. The Trudeau ministry includes Harjit Sajjan, a turban-wearing Sikh as Defence Minister, and Maryam Monsef, a Hazara Afghan refugee, as Minister for Women and Gender Equality. There's also a Paralympian and an astronaut in their ranks. 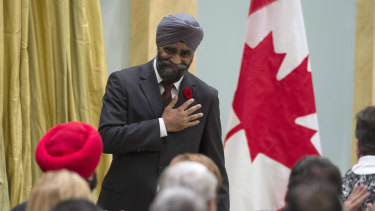 In the UK, the Chancellor of the Exchequer – we would call him Treasurer – in Boris Johnson's conservative government, Rishi Sunak, is of Punjabi descent. Widely regarded as heir apparent for when the gaffe-prone Boris finally runs out of bluster, it is a seismic shift in a bitterly divided nation – and for UK racists it is criticised like when the national football squad started giving game time to black footballers in 1978.

In our Federal Parliament? The current federal ministry is still dominated by grown-up private school boys in pin-striped suits who do not in any way reflect the diversity that you see on the streets of any Australian city or town.

Some politicians still think it funny to mispronounce a “foreign” name or to mimic a “funny” accent to belittle an opponent. Tasmanian Liberal Senator Eric Abetz in Parliament recently demanded that three Australian citizens of Chinese heritage “unconditionally condemn the Chinese Communist Party dictatorship”. All those who have lost their livelihood exporting to China ought to write to Senator Abetz and thank him for his contribution to their plight.

Within days of her maiden speech, one of our few Indigenous parliamentarians, Victorian Greens Senator Lidia Thorpe, released racist mail she had been sent. Penny Wong has been subjected to years of sneering, patronising critique, and I could go on. While we are pretending otherwise, racism is just below the surface of Australian public life.

Every time a politician or public figure says they want more tolerance, I flinch. I do not want anyone to ‘tolerate’ me – that they will reluctantly accept my existence but not much more. Replace it with “inclusiveness”. 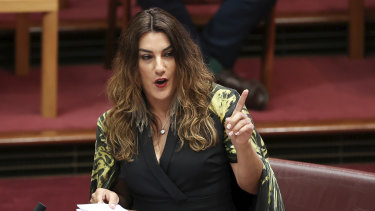 In 25 years of daily broadcasts on ABC Radio Melbourne, there was barely a day that passed without an anti-Semitic text, letter or email. When violence was threatened, the Federal Police intervened.

Media figures of Muslim faith say they cop it even worse, but I am not wanting to start a competition here nor do I seek sympathy. The legacy of the White Australia policy – one of our founding myths – lingers in widespread lazy racial stereotyping.

How will redneck Aussie racists cope if we have a Jewish Prime Minister? Josh Frydenberg is the most likely candidate to take on the leadership of the Liberal Party after Scott Morrison. Together with Mark Dreyfus – the senior Jewish ALP figure – he has made a point of visiting mosques, including after the Christchurch massacre. Would Frydenberg embrace diversity targets if given the chance? Unlikely – within his party, there is staunch resistance to targets of any kind.

What are we doing about it? Not much. The conservatives resent the very existence of a diminished Human Rights and Equal Opportunity Commission, which is cash-starved, hamstrung and barely able to do its vital job or fulfil its potential. This proudly multicultural nation has no campaign promoting community harmony, no strategy for strengthening multiculturalism and next to no public initiatives challenging racism. Those in charge cannot see the need because they are themselves a monoculture and fear upsetting the racists in marginal seats who they court for votes. Sad, isn’t it?

Jon Faine is a former presenter on ABC Radio Melbourne.