Tiger embarks on the ‘longest walk ever’ in India, travelling 807 miles in search of prey or a mate

A tiger has embarked on the ‘longest walk ever’ in India after it travelled 807 miles in search of prey or a mate, surviving by killing wild pigs and cattle along the way.

The two-and-a-half year-old male left its home in June after being fitted with a radio collar just months before.

The tiger, named C1, had been kept at a wildlife sanctuary in the western state of Maharashtra and was tracked travelling back to the site, after crossing farms, highways and even a neighbouring state.

Despite the five month journey, the animal only came into contact with humans once after it ‘accidentally’ injured a person who had been part of a group exploring the area where the animal had been resting. 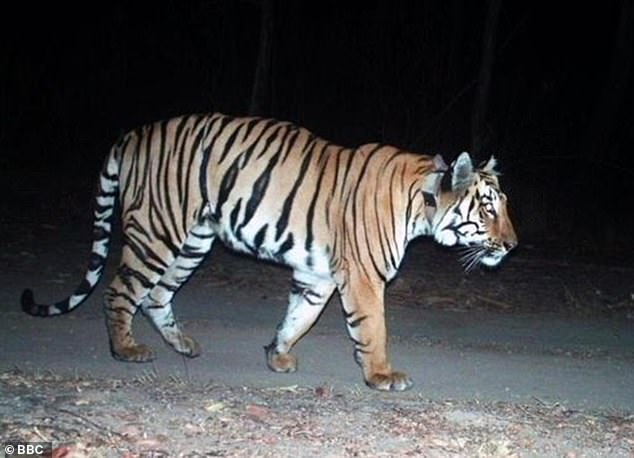 The tiger, know as C1 (pictured above) walked 807 miles over a five month period in Maharashtra, India 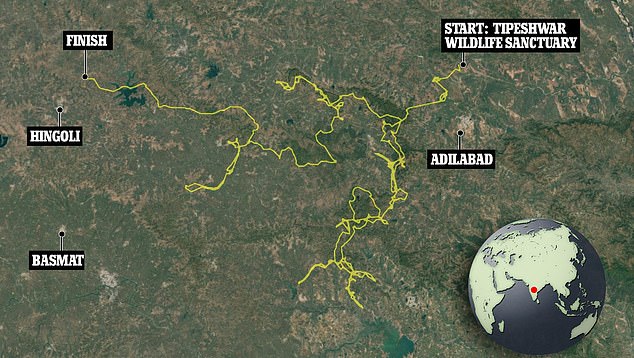 It is thought tigers need a breeding and prey population of 500 to ensure a food bank, and it is believed that the tiger was on the look out to secure this elsewhere.

According to the BBC, the tiger had been one of three male cubs born at the Tipeshwar sanctuary which is also home to ten other tigers in the state.

After being fitted with the collar in February, he continued to roam the forests before setting off to ‘find a suitable area to settle’.

After his long journey the animal was finally tracked down to another wildlife sanctuary in Maharashtra and the BBC quoted officials who claimed the tiger had not travelled in a ‘linear manner’.

Over the last nine months he was tracked to over 5,000 locations.

Speaker to the broadcaster a senior biologist with the Wildlife Institute of India, Dr Bilal Habib said: “The tiger is possibly looking for territory, food and a mate. Most of the potential tiger areas are full and new tigers have to explore more.’

He confirmed the once accidental injury and said this was a one off and claimed that most ‘people don’t know when a tiger is travelling in their backyard’.

Despite this, wildlife officials claimed the tiger may have to be captured and relocated to avoid any ‘untoward accidents’.

After the huge journey, the collar has been drained to 80 per battery life and officials fear they will lose communication with the tiger.