Thug glassed army veteran, 50, in the face as he celebrated his daughter’s 18th birthday, leaving the PTSD sufferer too scared to go outside 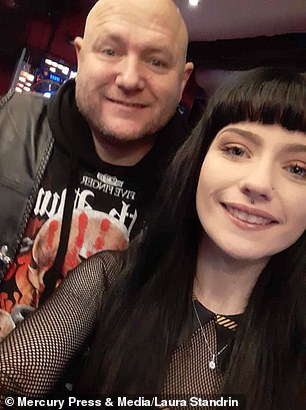 Chris Harrison, 50, with his daughter Chloe, 18, on her birthday

An army veteran with PTSD was glassed in the face during his daughter’s 18th birthday celebrations and is now too scared to leave the house.

Chris Harrison, 50, was glassed with a pint glass by a thug while celebrating daughter Chloe’s 18th birthday in Sheffield city centre on Christmas Eve – leaving him needing stitches to treat seven gashes across his face.

The single father-of-two, who has suffered with PTSD since serving in the Duke of Wellington’s Regiment for five years before leaving the force in 1994, said the psychological impact of the attack – which happened outside a bar just after midnight – has been ‘unbelievable’.

Mr Harrison, from Sheffield, said he feared he was going to die in the unprovoked assault, which has also left him in agonising pain.

He said: ‘It was so traumatic, I’m scared to go anywhere. I haven’t been out of my flat since it happened. 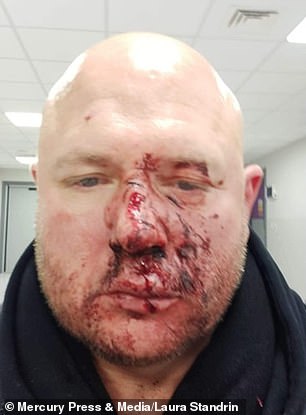 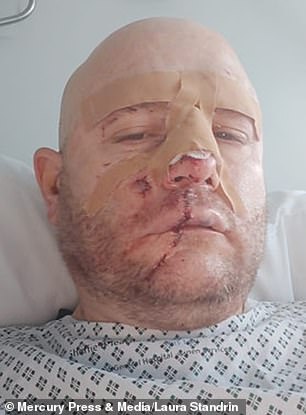 Mr Harrison was glassed in the face (left) while waiting for a taxi in Sheffield city centre on Christmas Eve. After rushing to hospital in a taxi, hospital staff told Mr Harrison he was lucky he hadn’t lost his eyesight (right)

‘The affect its had on me psychologically is unbelievable.

‘Looking at me, because I’m ex-army, you’d think I could take it but I thought he was going to kill me.’ 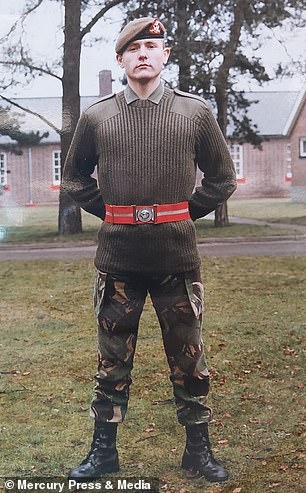 The retired soldier had just said goodbye to Chloe in a nearby pub as she headed off to a club in the city centre after a family gathering before the attack last week.

Mr Harrison, who had drunk five pints, claims he was approached by a man who attacked him with a pint glass while waiting for a taxi after the man shouted he was ‘looking at him’.

He said: ‘It was the end of the night and my daughter wanted to go to a club so I went home, clubs aren’t my thing anymore.

‘There was a man on the phone arguing with someone, I was looking in his general direction and he started shouting ‘what are you looking at’ and then the next thing, he was calling me a racist.

‘I told him I wasn’t a racist, I was just waiting for my taxi and I did everything I could to diffuse the situation.

‘He was looking for trouble. I didn’t even know the guy. When I went to get in my taxi, he came towards me and called me a racist b*****d.’ 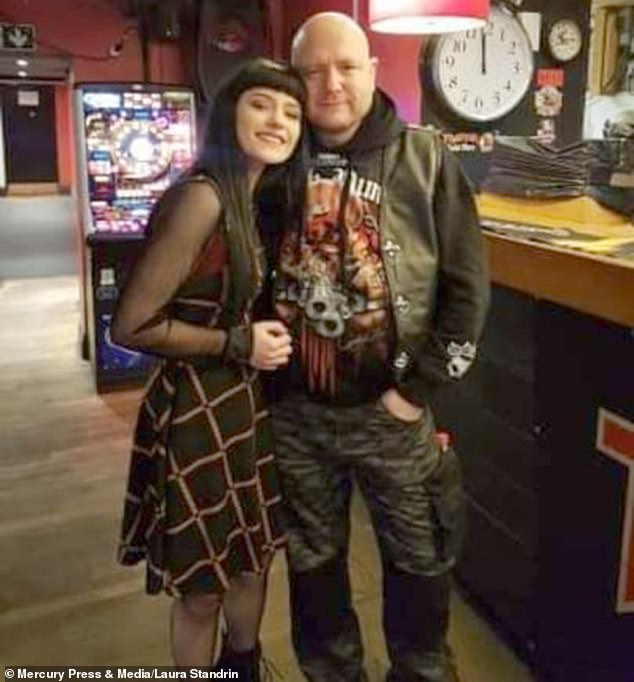 Mr Harrison and his daughter Chloe on her 18th birthday. He said Chloe has been left distraught by the attack

He continued: ‘I told him I wasn’t a racist and he threw the glass in my face. I was shocked, dazed and confused. I didn’t know what to do.

‘I’m ex-army so I knew to go on the defensive by shouting at him. I was staggering around waiting for the next attack, but thank God it didn’t come.’

After rushing to hospital in a taxi, hospital staff told Mr Harrison he was lucky he hadn’t lost his eyesight.

Mr Harrison, who lost his son Daniel earlier this year aged just 23, was forced to undergo a four-hour operation to remove the glass and apply stitches.

He said Chloe has been left distraught by the attack.

Mr Harrison said: ‘My top lip split completely. Christmas was horrible, I was in agony, I couldn’t eat and my face was in so much pain.

‘Chloe was shocked, upset and distraught. My son died earlier this year so I’ve had that to deal with and now I’m just worried that he’ll do it to someone else.

‘Police have CCTV but have said they don’t think there’ll be much chance of a prosecution.

‘I’m sure if he’d done it to a police officer there would be.’

A South Yorkshire Police spokesperson said: ‘At around 1:30am on 24 December 2019, police received reports of an attack outside the Sheffield Water Works Company Wetherspoons on Carver Lane.

‘It is reported that the victim was waiting for a taxi when he was hit with a pint glass, causing facial injuries which required hospital treatment.

‘Extensive lines of enquiry, including detailed analysis of CCTV footage, have been pursued to find who is responsible, however the attacker has not yet been identified.

‘If anyone has any information which might help our officers, please call 101.’