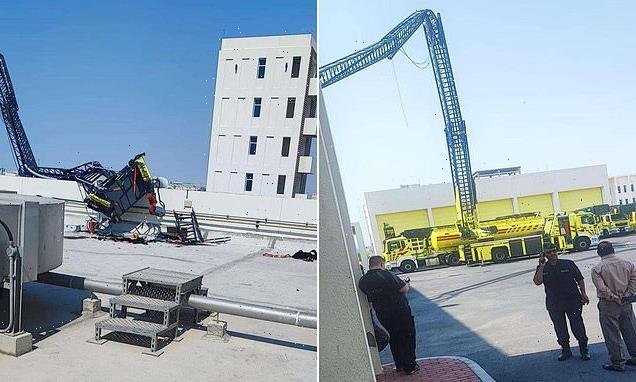 Three Pakistani firemen have died in a training accident in Qatar just weeks before the start of the World Cup, officials confirmed today.

Authorities said the three were not taking part in a multi-national World Cup security exercise currently being held around Doha that includes simulations of ‘chemical incidents’ and demonstrations.

But accounts given by friends of the three and posted on social media said they were on a firetruck-mounted crane that collapsed in the Qatari capital’s Hamad port as part of a separate training exercise.

Officials did not give details of the accident late Wednesday.

Photographs circulating on social media appeared to show the crumpled crane whose walkway seemed to have buckled midway up the structure.

The images showed how the metal frame had folded at a precarious angle, sending the upper section of the crane smashing into the roof of an adjacent building.

Timestamps on the images suggested the incident unfolded on Tuesday morning. 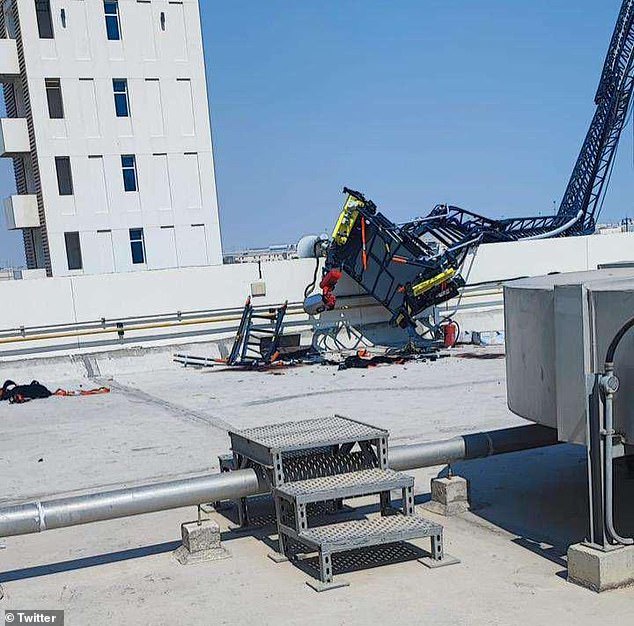 The metal frame had folded at a precarious angle, sending the upper section of the crane smashing into the roof of an adjacent building 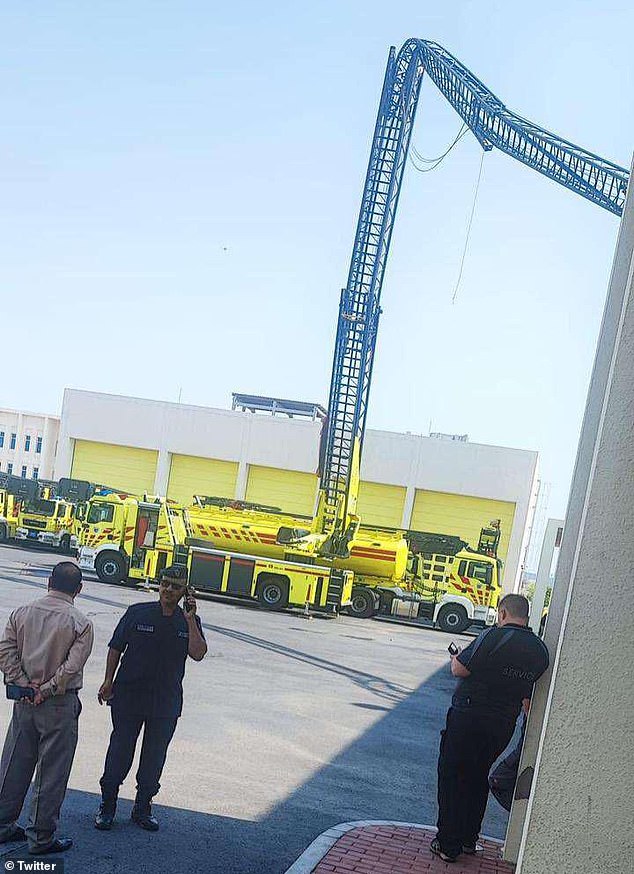 The crane’s walkway appeared to have buckled, causing the upper part of the structure to fold over and smash into the concrete 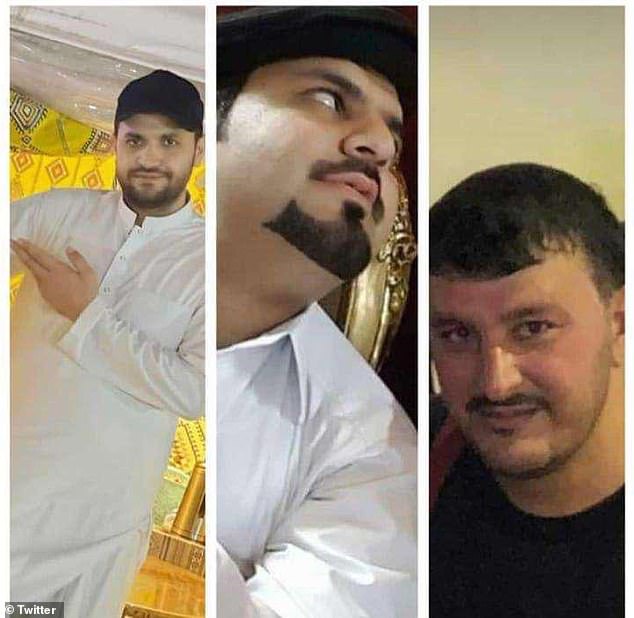 Initial reports suggested the three victims were Qatari and Kuwaiti nationals, but these theories were challenged by a relative of one of the victims who confirmed to to Doha News the men, all three in their 30s, were of Pakistani origin.

The trio were identified as Yosef Mindar, Kaleem Allah, and Jalal. Mindar, a father of two, had lived his entire life in the Gulf state.

The two other victims have families based in Pakistan, according to Doha News’ report.

The news comes as a human rights lawyer in Nepal hit out at Qatari authorities, claiming the World Cup is ‘bloodstained’ due to the numbers of migrant worker deaths.

But Qatar’s emir says his nation is being subjected to a ferocious campaign of ‘fabrication and double standards’.

‘Qatar has been subjected to an unprecedented campaign that no host country has ever faced,’ Sheikh Tamim bin Hamad Al Thani told Qatar’s legislative council this week.

‘We initially dealt with the matter in good faith and even considered that some criticism was positive and useful.

‘But it soon became clear to us that the campaign continues, expands and includes fabrication and double standards, until it reached a level of ferocity that made many question, unfortunately, about the real reasons and motives behind this campaign.’

Qatar will become the first Middle Eastern country to host the cup when it kicks off on November 20.

The Islamic country of 2.7 million people was awarded the cup in 2010, prompting a $A470 billion construction program including eight stadiums, a new train system in Doha and numerous hotels.

Qatari authorities say 37 migrant workers linked to construction of stadiums have died, but some tallies put the death toll in the thousands. 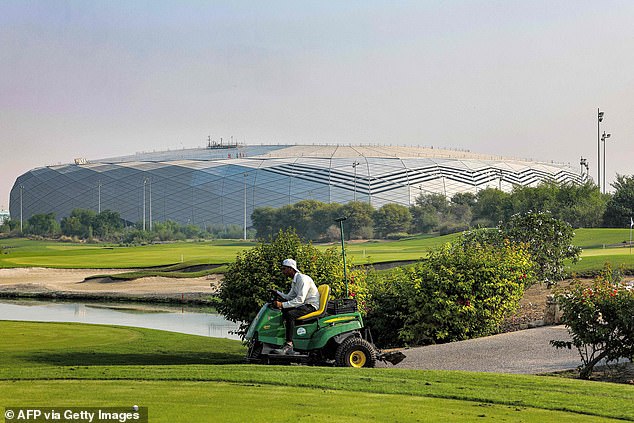 A worker mows the lawn of a golf course near the Education City Stadium in Doha on October 27, 2022, ahead of the World Cup 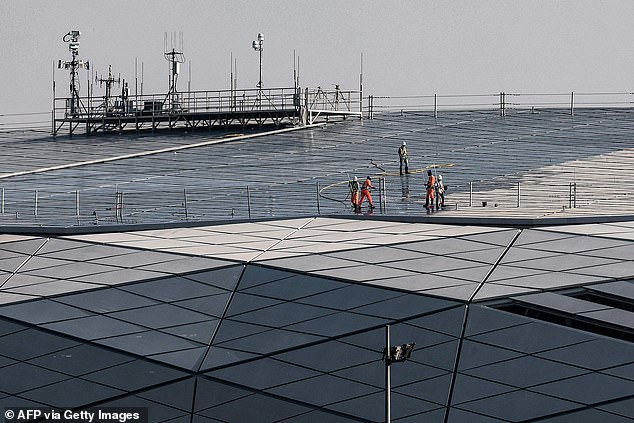 Despite threats of boycotts amid widespread criticism of alleged human rights abuses and poor treatment of migrant workers in the run up to the World Cup, all 32 teams which qualified for the tournament are set to take part 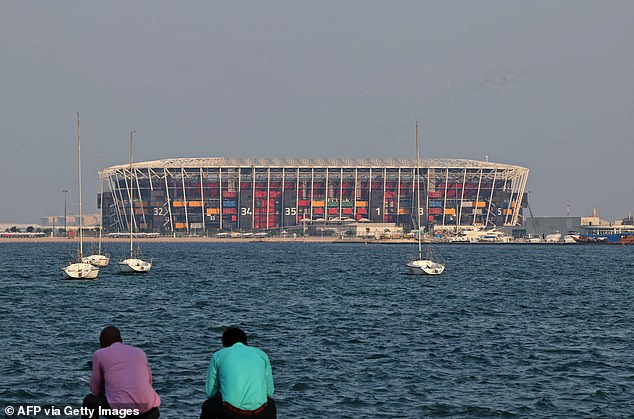 This file photo taken on October 20, 2022 shows a view of the 974 Stadium, which will host matches during the FIFA football World Cup 2022, in the Ras Abu Aboud district of the Qatari capital Doha

Despite threats of boycotts amid widespread criticism of alleged human rights abuses and poor treatment of migrant workers in the run up to the World Cup, all 32 teams which qualified for the tournament are set to take part.

Exercises have included fighter jet drills, a chemical attack on a stadium and handling demonstrations.

Turkey has sent about 3,000 police to reinforce Qatar’s domestic force during the World Cup that starts November 20 and ends December 18.

Some diplomats have questioned whether the foreign police have had proper training on handling the one million fans predicted to come to Qatar for the games.

Qatar’s Safety and Security Operations Committee said the exercises had shown ‘the capabilities, readiness, and determination of the military forces and civil authorities to deal with all scenarios’.

General Michael Kurilla, head of the US Central Command that manages US forces across the Middle East, was in Qatar for the start of the exercises.