We were riding around Doha in a taxi on a Friday morning with C.W. McCall’s 1975 trucker anthem Convoy playing on the radio. The driver was called Phillip, a young man from somewhere in Africa who didn’t know the way, and was therefore asking us for directions. 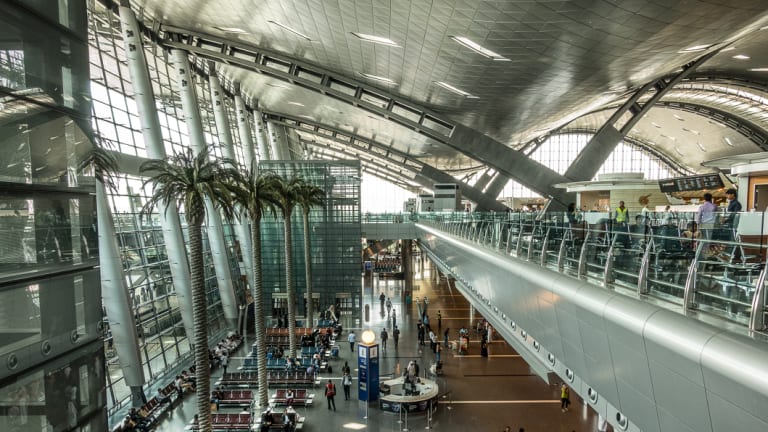 We arrived at Doha airport luggage-free, but also spare underwear-free.Credit:Shutterstock

The traffic lights changed, and so did the song: Earl Scruggs and Lester Flatt, 1962, The Ballad of Jed Clampett. Yes, the theme from The Beverly Hillbillies. They’re both songs I’d hoped never to hear again.

I am not making any of this up.

The trouble started the day before when we had to return a hire car to Madrid airport. I’ve returned hire cars on the Continent before, and it’s never a straightforward transaction. But like Theresa May I obviously haven’t learnt anything from my dealings with Europe, because once again we found ourselves doing laps of the terminal’s approach roads looking for a petrol station that was on the map but not on the actual ground as well as the correct exit for hire car return.

As the clock ticked down to check-in time – our March 29 – we gave up on the fuel and headed for the car park. Result: a bill for half a tank of expensive Spanish petrol plus a 20-odd euro refilling fee that no one had budgeted for.

At the check-in desk I was bemused to see the clerk attaching labels to our bags marked MEL-DOH.

“We’re stopping over in Doha,” we said.

“Yes,” the clerk explained. “But the conditions on the ticket say we have to check your bags through if you’re stopping for less than 24 hours.” We were only stopping for 20. We clearly hadn’t read the fine print on our exit agreement.

“Can we at least get some things out of our bags,” we asked, as the last suitcase disappeared into the black hole at the end of the conveyor belt. There was no backstop.

And so we arrived in Doha in the middle of the night with no luggage, no clean underwear and only the prospect of a hotel toothbrush and its accompanying tiny tube of toothpaste for comfort.

I reflected on all this as I waited in the “other nationalities” queue at immigration. It was a very long, slow queue full of tired people who were mostly not from Europe: a bit like the rest of the world, really.

The trio in front of me were clutching British passports that would soon consign them to queues like this whenever they travelled. I didn’t have the heart to ask them whether they’d voted leave or remain.

And I thought, but didn’t say, “Welcome to the future. This is what life’s like when you crash out of Europe.”

Matt Holden is a regular contributor.