The revelations about John Bolton's forthcoming book have shaken up the Senate impeachment trial, which appeared to be moving toward a speedy acquittal for Trump as early as the end of the week. 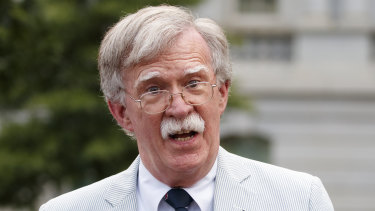 Former national security adviser John Bolton has said he was prepared to testify if subpoenaed.Credit:AP

Trump's lawyers have argued that there was no connection between the delivery US$391 million in US military aid and investigations into Trump's potential election rival Joe Biden.

Two key Republican senators on Monday (Tuesday Australian time) said they were increasingly likely to join Democrats and vote to subpoena Bolton to appear at the trial. The Democrats need four Republican votes to call witnesses and produce documents related to the case.

Witness testimony would extend the trial, almost certainly denying Trump the chance to claim exoneration at his State of the Union address on February 4. 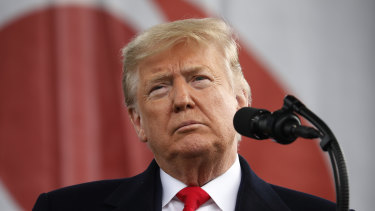 Lawyers at the weekend accused the Democrats of trying to overturn the results of the 2016 presidential election by throwing Trump from office.Credit:Bloomberg

"I think this is a game-changer," Democratic senator and presidential hopeful Amy Klobuchar said.

Susan Collins, a moderate Republican senator from Maine, said: "The reports about John Bolton's book strengthen the case for witnesses and have prompted a number of conversations among my colleagues."

Republican Senator Mitt Romney said: "I think, with the story [about Bolton's book] that came out yesterday, it's increasingly apparent that it would be important to hear from John Bolton.

"I think it's increasingly likely that other Republicans will join those of us who think we should hear from John Bolton. 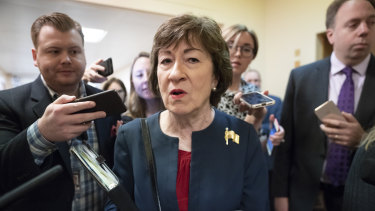 "I've spoken with others who've opined upon this as well."

Bolton has said he would agree to appear before the Senate if served a subpoena.

Republican Senator Lindsey Graham, a vocal ally of Trump, said that he would support a subpoena to obtain Bolton's manuscript. "I want to know what's in the manuscript, yeah," he told reporter. "I think that's important."

Trump's legal team will ramp up its defence of the President on Monday (Tuesday Australian time) with high-profile lawyers Alan Dershowitz and Kenneth Starr arguing why he should not be removed from office.

Bolton's book chronicling his time at the White House, The Room where it Happened, is scheduled to be released on March 17.

The New York Times first revealed the contents of his manuscript, which was circulated to the White House for security clearance in late December.

Trump lashed out at his former adviser on Twitter, saying: "I NEVER told John Bolton that the aid to Ukraine was tied to investigations into Democrats, including the Bidens.

"In fact, he never complained about this at the time of his very public termination.

"If John Bolton said this, it was only to sell a book."