Massachusetts: One of the world's thickest mountain glaciers is finally succumbing to global warming, a new analysis reports.

The Taku Glacier, located north of Juneau, Alaska, has started to retreat as temperatures rise, said Mauri Pelto, a glaciologist at Nichols College in Massachusetts.

Up until now, of the 250 glaciers that he has studied, all had retreated except one: Taku Glacier.But an analysis shows that Taku has lost mass and joined the rest of the retreating glaciers.

"This is a big deal for me because I had this one glacier I could hold on to," Pelto told NASA's Earth Observatory. "But not anymore. This makes the score climate change: 250, and alpine glaciers: 0." 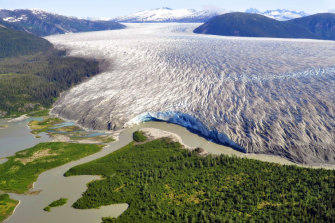 An aerial view of Alaska’s Taku glacier near Juneau.Credit:Shutterstock 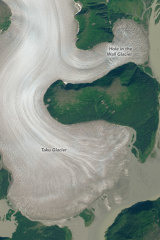 NASA image of the Taku Glacier in Alaska, taken in August 2014. Credit:NASA

New photos released by NASA this week show that the melting of Taku has at last become visible.

Taken in August 2014 and August 2019, the photos show the icy platforms where the glacier meets a river retreating for the first time since scientists began studying Taku in 1946, LiveScience said.

Taku is an extremely thick glacier: In fact, it is one of the thickest known alpine glaciers in the world, measuring 4860 feet from surface to bed.

A study about the glacier's retreat was published last month in the journal Remote Sensing. 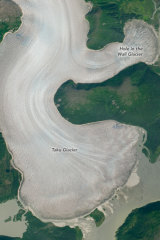 A Nasa image of the Taku Glacier in Alaska, taken in August 2019.Credit:NASA

Overall, thanks to global warming, Earth's glaciers continue to melt away, losing up to 390 billion tons of ice and snow per year, a study published earlier this year suggests.

The largest losses were glaciers in Alaska, followed by the melting ice fields in southern South America and glaciers in the Arctic.

At 1500 square miles (3885 square kilometres), the Juneau icefield is a third larger than the US state of Rhode Island, stretching from the Pacific Ocean into Canada, according to the Anchorage Daily News. It has dozens of named glaciers – including Taku – and many more smaller, unnamed glaciers.

A 2016 scientific paper reported that the ice field is expected to lose more than half its ice by the end of the century and to disappear completely before 2200, the Daily News said.

Taku's quick retreat was a surprise to Pelto: "We thought the mass balance at Taku was so positive that it was going to be able to advance for the rest of the century," said Pelto.

"A lot of times, glaciers will stop advancing for quite a few years before retreats start. I don't think most of us thought Taku was going to retreat so quickly.

"To be able to have the transition take place so fast indicates that climate is overriding the natural cycle of advance and retreat that the glacier would normally be going through," Pelto said to NASA's Earth Observatory.

"Taku Glacier is being exposed to melting it hadn't before, which will drive new changes."