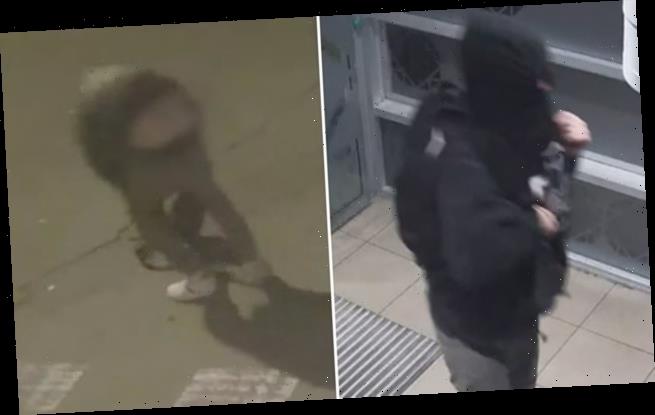 A thief accused of robbing a pub suffered an embarrassing fall as he ran from the scene, unwittingly exposing his bare backside to CCTV cameras.

Police arrived at the Hilton Hotel, in the Adelaide suburb of Hilton, following reports of a robbery late on Monday night.

Two men – one armed with a kitchen knife – entered the gaming room of the South Road venue and held staff and customers at knife point as they emptied the tills.

As the pair fled the Hilton Hotel one of the men suffered an embarrassing fall, flashing his bare backside to CCTV cameras

Gaming room manager Pankaj Kaushik from the Hilton Hotel told Nine the pair ‘came in, pointed the knife and then they left’.

As the duo ran from the scene, heading for nearby Mallen street, one of the men took a tumble, falling to his knees and exposing his bare bottom.

The man recovered from the fall quickly, using one hand to pull up his sagging pants while holding a black backpack in the other.

Mr Kaushik has suspicions the robbery could have been premeditated, with security scheduled to start work at 11:30pm, just after the men stormed the hotel.

While no staff members or customers were physically injured during the robbery, impacted employees received a day off to recover.

‘ … It is a stressful situation, if you look at it we are just coming to do our work and facing that kind of a scenario is pretty stressful for us,’ Mr Kaushik said.

‘We have got good protocols over here in the Hilton but we will still have to review it and see what best we can do for our staff protection.’

West Australian police have described the man carrying the knife as wearing a black hooded jumper, beige trousers and gloves, and grey shoes with a white sole.