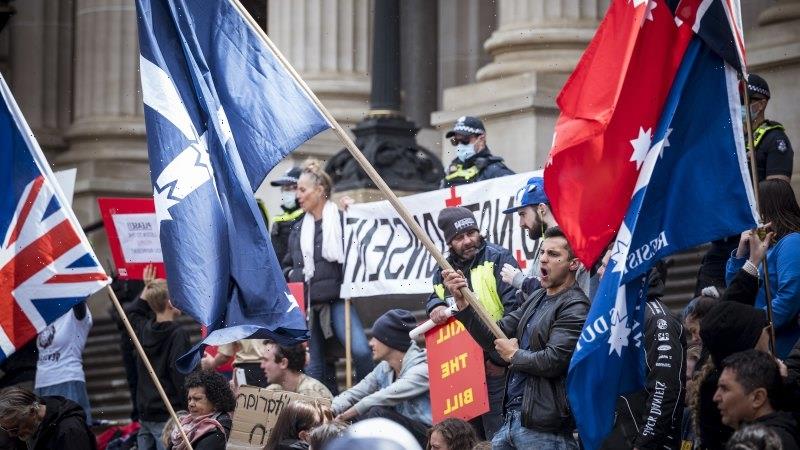 Melbourne has a well-earned reputation as the protest capital of Australia. From the days of early settlement, people have taken to the streets to voice their concerns. While some protests have taken a violent turn, most – including the vast crowds of the Vietnam moratorium campaigns of 1970 or the more recent Black Lives Matter protests – have been peaceful.

Under Victoria’s Charter of Human Rights and Responsibilities Act – 15 years ago the first such charter in the country – every Victorian has the right to freedom of expression, peaceful assembly and freedom of association. 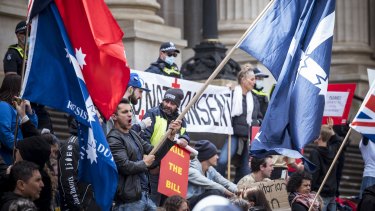 Protesters on the steps of Parliament House. Credit:Chris Hopkins

The protests currently taking place on the steps of State Parliament enjoy the full protection of those rights. And after more than 260 days in lockdown, and now the introduction of a controversial pandemic bill, a level of frustration with the Andrews government is understandable.

The proposed pandemic laws, a major target of the protesters, have been widely criticised, most notably for their lack of proper oversight, by a range of legal experts and public advocates. The protests have also become a rallying point for those concerned about vaccine mandates and, more broadly, the efficacy and safety of receiving a vaccine at all. While The Age has raised its own concerns about the pandemic laws, and voiced some doubts about the extent and need for mandates, it strongly objects to conspiracy theories about the safety or efficacy of the vaccination program. It is a global health measure that will save many millions of lives.

The protesters have the right to voice their disquiet, but this comes with one substantial proviso. As the human rights charter makes clear, what is being protected is the right to partake in a “peaceful” assembly. What became evident this week, was the willingness of some protesters to use threats of violence as a means of expressing their grievances.

On Wednesday, Premier Daniel Andrews said a number of people had made “appalling” threats against his wife, Catherine, and their children. Demonstrators have carried signs likening Mr Andrews to Adolf Hitler, chanted death threats against him and paraded apparently operational gallows outside Parliament, to the cheers of the crowd, as one woman called for people to “dance on the end of a rope”. Counter-terrorism officials have also charged a Victorian man who allegedly encouraged protesters to bring firearms to Parliament and execute Mr Andrews.

The three crossbenchers whose support the government has been relying on to pass the pandemic bill – the Greens’ Samantha Ratnam, the Reason Party’s Fiona Patten and the Animal Justice Party’s Andy Meddick – have also told of being targeted, including with death threats, in the lead up to the vote.

This appalling conduct should be condemned. It may not reflect the behaviour or the beliefs of the broad range of people who have attended rallies over many months, but such ugly behaviour from what are believed to be a range of far-right groups taints them all and diminishes the legitimacy of their protest.

What is astonishing is that, despite all this, the Liberal opposition spokesman for community recovery, Craig Ondarchie, mixed with the protesters on Tuesday, posting online that he was: “Out thanking these wonderful Victorians, outside their house – the People’s House, who have had a gut full of Daniel Andrews controlling their lives, their happiness, their freedom.” Other Liberal MPs, including shadow treasurer David Davis, Nick Wakeling and Bernie Finn, have also fronted up to support the protests. They may argue that they don’t support the violent element, but their presence at protests that have increasingly become menacing reflects badly on them as elected parliamentary representatives. They add to what is already a highly charged and possibly dangerous situation.

The pandemic has created enormous upheaval, severely curtailing the lives of most Melburnians. It is critical that Victorians retain the right to express their frustration and anger. But there can never be an excuse for threatening violence against others. Some of the language that has been used, the medieval threats and the images posted in recent days are horrific. They have no place in this debate, much less as a backdrop for politicians, including Liberals and Clive Palmer’s United Australia Party to campaign.