The number of job vacancies private high schools need to fill has more than doubled in two years with the most severe teacher shortages in the subject areas of maths and physics.

A national survey of independent school principals has found about two-thirds of school heads said there were insufficient maths teachers to fill positions and 55 per cent reported a shortage of physics teachers. 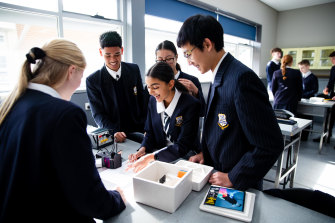 A class of year 11 physics students at Five Dock’s Rosebank College. Principal Iris Nastasi said the school has about 50 physics students in the senior years and recruiting teachers for sciences is increasingly difficult. Credit:Edwina Pickles

The Association of Heads of Independent Schools of Australia (AHISA) surveyed its 440 members – who oversee 443,000 students – on recruitment and retention of staff in schools across the country. Of the third that responded, 42 per cent reported design and technology teacher shortages, and about a third said finding teachers for chemistry and languages subjects was increasingly difficult.

The survey found high school teacher turnover rates jumped from about 5 per cent in 2019 to 11.5 per cent last year, with family relocation, retirement and teachers taking up positions at other schools the top three reasons for leaving.

“I don’t know a principal right now who isn’t grappling with shortages. It’s the worst I’ve seen it,” Iris Nastasi said, the principal of co-ed Rosebank College in Five Dock.

Recruitment for the school’s year 11 physics teacher earlier this year stretched over nine weeks with five candidates applying for the job.

“In the past, we would have seen double that number applying, and in subjects like English and art, we would have had a basket full of applications. Instead, we had just a handful [for the physics position] and most weren’t suitably qualified,” Nastasi said.

“We persevered and found a great applicant. Even though the school has a relatively low turnover rate, you really want to avoid taking teachers off other classes.”

Technological and applied studies (TAS) – which cover subjects such as agriculture, design and technology, as well as wood and metal work – are also seeing shortages, she said. “TAS teachers can get jobs in the industry, and the industry pays more.”

“There has been a loss of staff that weren’t vaccinated against COVID-19, teachers off sick and fatigue is a huge factor,” said Blackwood.

Lee Hyland, president of the Mathematical Association of NSW, said while teacher shortages “have been coming for a while, COVID-19 has sent it over the edge.”

“Many maths teachers in their first year out of university could earn double if they took a job in data analysis, statistics or modelling.”

“The workload has increased exponentially in the 27 years I have been teaching, especially administrative work. We need trained maths teachers in classes because they can explain the content the best. They are seeing teaching as devalued.”

A spokesperson for the Science Teachers Association of NSW said there was a sharp increase in science teacher shortages and teaching out of field.

“Science teacher numbers have been decreasing for years, and we have been advocating for action. We will be collecting further data on this to present to education ministers at the state and federal level.”

“The vaccination mandates took out about 5 per cent of about 11,000 staff across all our schools that we won’t get back. We are losing the casual pool,” he said.

Australian Bureau of Statistics figures show 21 per cent more students will begin school in 2030 compared with 2021. Principals across all school sectors have previously warned the teacher shortage is worsening, including in areas like physical education and English.

Catholic schools in NSW have said they expect a workforce shortfall of around 15 per cent by the end of the decade and plans by the NSW government to plug STEM teacher shortage gaps in public schools are facing major hurdles.

Craig Petersen, head of the Secondary Principals Council, said public high school teachers have resigned from their positions this year to take up positions in non-government schools because they “perceive working conditions and salaries to be better.”

“It’s a cascading problem. The schools least affected are the most advantaged and in the cities, but the issues we are having are being felt right across the board.”

Petersen said along with “appropriately addressing professional concerns around salaries and working conditions, governments can also ensure educators are consulted around policy and decisions that will impact on schools. Our voice seems the last to be heard.”

Geoff Newcombe, head of the Association of Independent Schools of NSW, said the independent sector have established a three-year strategy, Growing and Nurturing Educators (GANE) to attract more people to teaching.

“This will include attracting more school leavers and career changers into teaching, attracting more diverse graduates, increasing teacher placements in the independent school sector and providing more support for teachers in the early stages of their careers,” he said.