They are the unheralded frontline in the fight against COVID-19 in multilingual Melbourne: workers, drawn from the communities in which they live, many in their first Australian jobs, fronting up at the public housing towers and homes of the north and west.

They distribute masks, sanitiser and culturally-appropriate information. Where necessary, they join the roaming health squads that regularly visit more than 600 at-risk high-density properties, including caravan parks and supported accommodation. 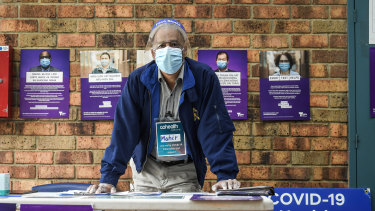 Mahir Ibrahim was told his job as a health concierge for his Carlton public housing tower would last a week. The success of the program means all 84 health concierges are employed until at least January.Credit:Justin McManus

It is the direct response to the July outbreaks that plunged nine North Melbourne and Flemington public housing towers into some of the most extreme coronavirus lockdowns experienced anywhere in the world before or since.

"In fighting COVID, we have now become part of it," says Mahir Ibrahim, 50, a resident of the Carlton public housing estates and one of 84 health concierges from 10 language groups.

Mr Ibrahim, who was born in Ethiopa and moved to Australia in 2000, can be found most days at the ground level of his building answering questions from his neighbours in Arabic, Amharic, Harari and English as they come in and out of the elevator.

"When the Flemington and North Melbourne buildings were shut down, that was creating frustration in our building, too, because we didn’t know what would happen," Mr Ibrahim says. "The information you see on a government website or on the TV, that’s not effective in our community, so … a lot of people were emotional and that has finished since we’ve been there, because they feel like there is someone there for them." 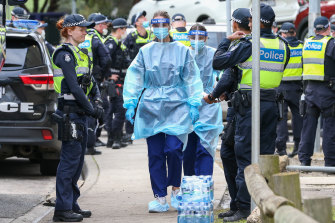 Police and health workers outside the Flemington public housing flats when they were locked down in early July.Credit:Getty

The rushed government response of July 4, in which armed police officers swarmed the Flemington and North Melbourne towers even before Premier Daniel Andrews had finished his televised announcement, meant residents missed out on food, medicines and advice. It is now the subject of a Victorian Ombudsman's investigation.

"We learned so much from that first experience," says Nicole Bartholomeusz, chief executive community healthcare provider Cohealth, which coordinates the programs.

"What’s going to be important is now sustaining these initiatives and not taking our eyes off the ball until we’re at a time when it’s safe to do so – and that could be when we’ve got a vaccine. The virus is so contagious, it’s probably still with us here in the community, and we just really need to stay on top of it."

Though a qualified civil engineer, Mr Ibrahim had been working as a truck and Uber driver before joining the health concierge team in July. The posting was supposed to run for a week, but the program's success means all 84 are guaranteed jobs until at least January.

"During the pandemic, it is a very rewarding job," Mr Ibrahim says. 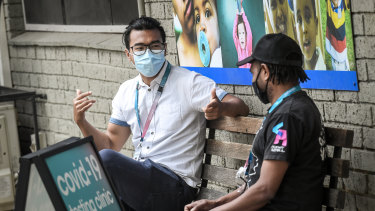 Van Bawi Phawng, a bicultural worker with Cohealth, is one of only about 500 Melbourne speakers of Burmese dialect Falam Chin.Credit:Justin McManus

Van Bawi Phawng, 30, belongs to Melbourne's Burmese community – specifically the language groups Hakha Chin and the smaller Falam Chin, which has only 500-600 speakers in Melbourne.

He started with Cohealth as a bicultural worker last year following a job in the shop at the Sealife Aquarium.

Mr Phawng works in the Collingwood's public housing estate's testing clinic and helps coordinate the health concierges. They meet in the mornings to plan the day and debrief in the afternoons to discuss any issues that need to be raised up the chain.

He has also produced eight social media videos for his community, ranging from mask wearing to more advanced advice about how long the virus can live on different surfaces.

"Our community leaders are very active in our [online] group chat. If something comes up, we get translated materials straight away, as opposed to the start [of the pandemic]. We’ve adapted very well, I think."

Ms Bartholomeusz said the next "piece of thinking" was about moving newly-appointed temporary staff, most of them in the health concierge program, into permanent work.

"We’ve seen such a benefit to them individually and to their families. And many of them are degree or masters qualified in the countries they come from," Ms Bartholomeusz said.

"There’s so much knowledge and skill there it will be a loss to Victoria not to have them working."