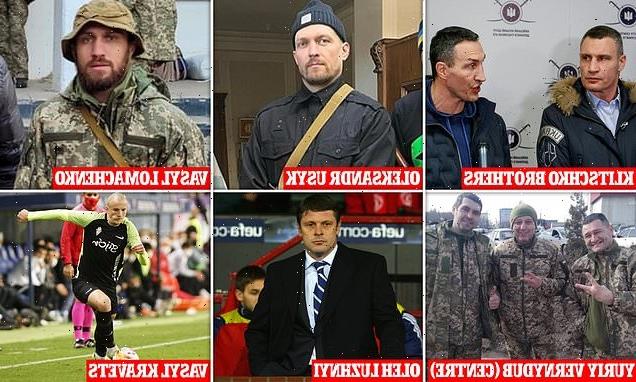 The Klitschko brothers, world heavyweight champion boxer Oleksandr Usyk and ex-Arsenal star Oleg Luzhny are among the Ukrainian sporting heroes who have vowed to join the battle to defend their homeland.

Vitali, the mayor of Kyiv, and younger brother Wladimir became heroes last week after they swapped gloves for guns and enlisted in the Ukraine reserve army in the fight to save their country.

The eldest of the pair, Vitali, said ‘I don’t have a choice’ but to stay and fight as the pair sent out an emotional plea to end the ‘senseless war’, before urging those who have stayed in Ukraine to act against the invasion.

The brothers have now been joined by WBO, WBA and IBF heavyweight champion boxer Usyk, who has enlisted with the Kyiv Territorial Defence.

Usyk, 35, had been in negotiations with Anthony Joshua over a rematch after defeating the British boxer by unanimous decision in September last year, but that fight is now likely to be delayed after the Ukrainian became the latest sporting hero to take up arms.

This morning, a Twitter account created to provide updates on the conflict shared a picture showing Usyk alongside three other soldiers.

The boxer was even dressed up in full military gear and was clutching a large gun while looking into the camera.

His friend and fellow Ukrainian boxer Vasyl Lomachenko has also taken to the frontlines.

The 34-year-old, a three-weight world champion, was initially reported to have left for Greece in the wake of Russia’s invasion, but has now returned to join the battle.

Re-posting a message from local mayor Vitaly Hrazhdan, who is also pictured, Lomachenko shared a photo on his Facebook page, dressed in military uniform.

And five months to the day since masterminding a Champions League win over Real Madrid, Sheriff Tiraspol manager Yuriy Vernydub has also returned to his native Ukraine and signed up to the territorial army.

A picture posted on social media showed Vernydub in his camouflaged attire with two army colleagues after deciding to return to his homeland from his work managing the football team in Moldova.

Born in Zhytomyr, a northern city in Ukraine, Vernydub has made the decision to help the military. He was pictured in camouflaged attire with two army colleagues.

Former Arsenal defender Oleh Luzhnyi yesterday revealed he plans to put his coaching aspirations in the UK on hold to fight for Ukraine, too.

Elsewhere in football, Vasyl Kravets has been excused from training with his team-mates at second-division side Sporting Gijon in Spain to return home.

The left-back has revealed in a heartfelt interview that he is willing to go to war even though he does not know how to reload a gun.

And outside of sport, Anastasia Lenna, Ukraine’s 2015 representative in the Miss Grand International beauty contest, posted a picture of herself dressed up in full combat gear. 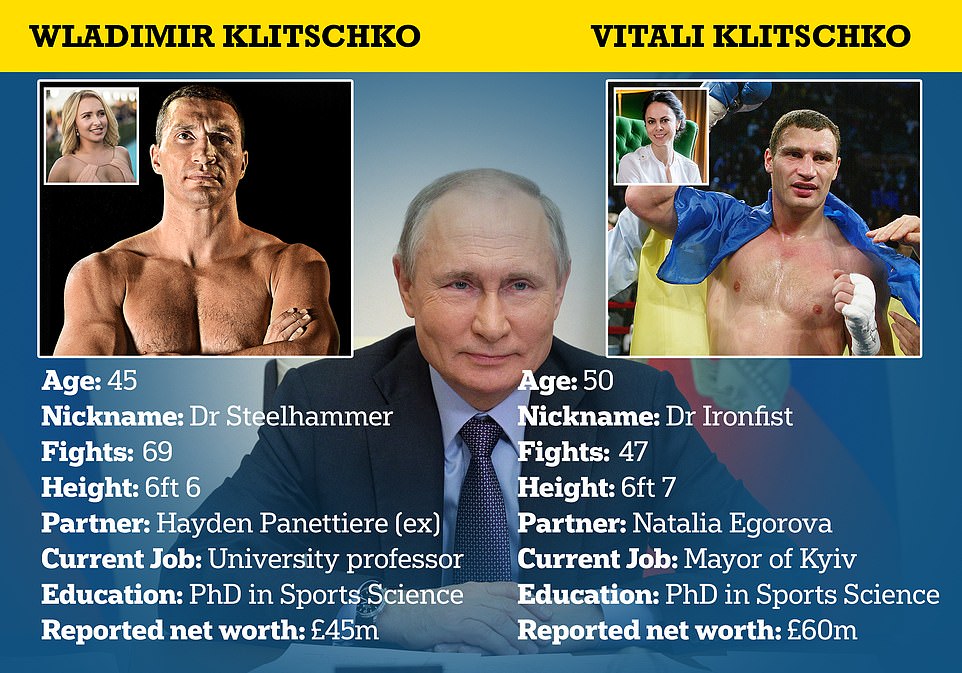 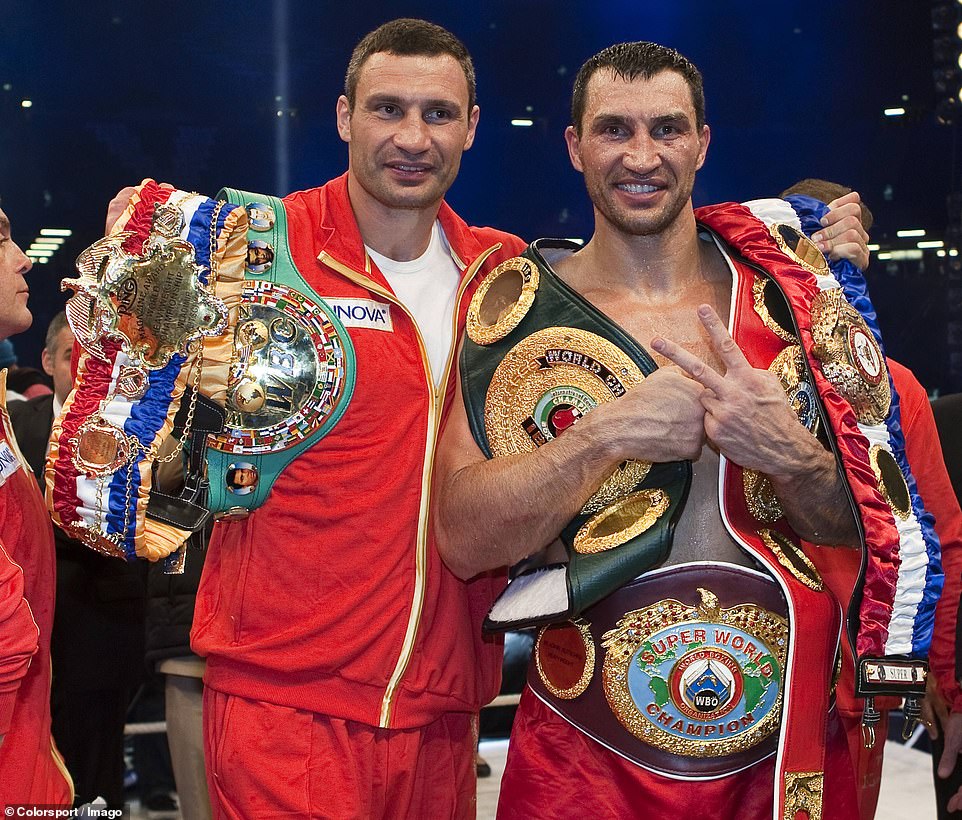 Vitali Klitschko (left), mayor of Kyiv, now 50, and his brother Wladimir Klitschko (right), 45, are planning to take up arms for their country. Both have won a string of world heavyweight fights 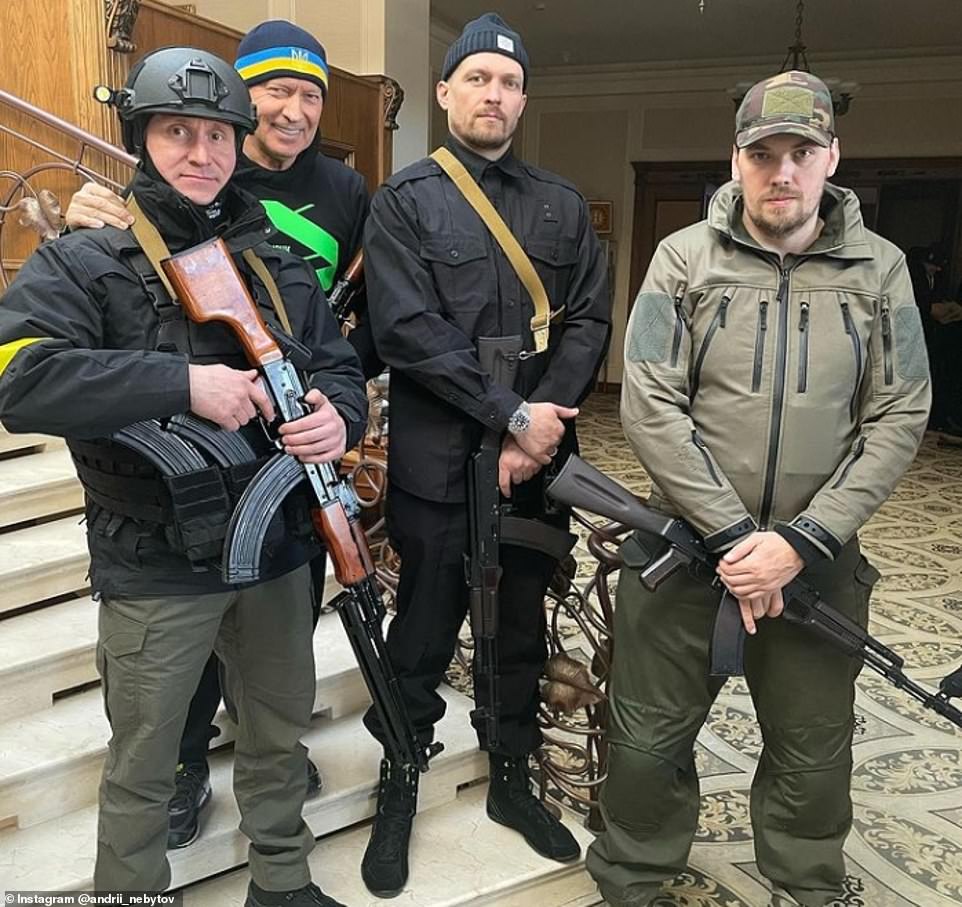 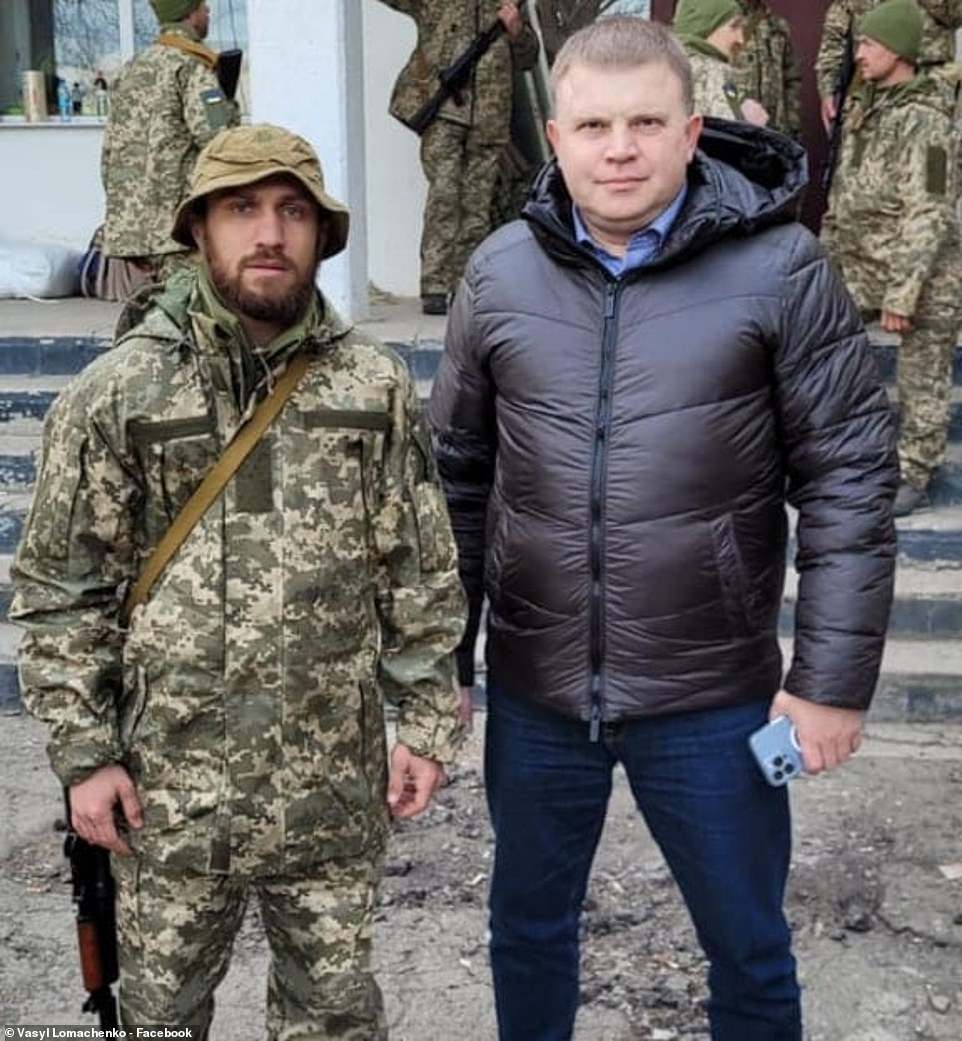 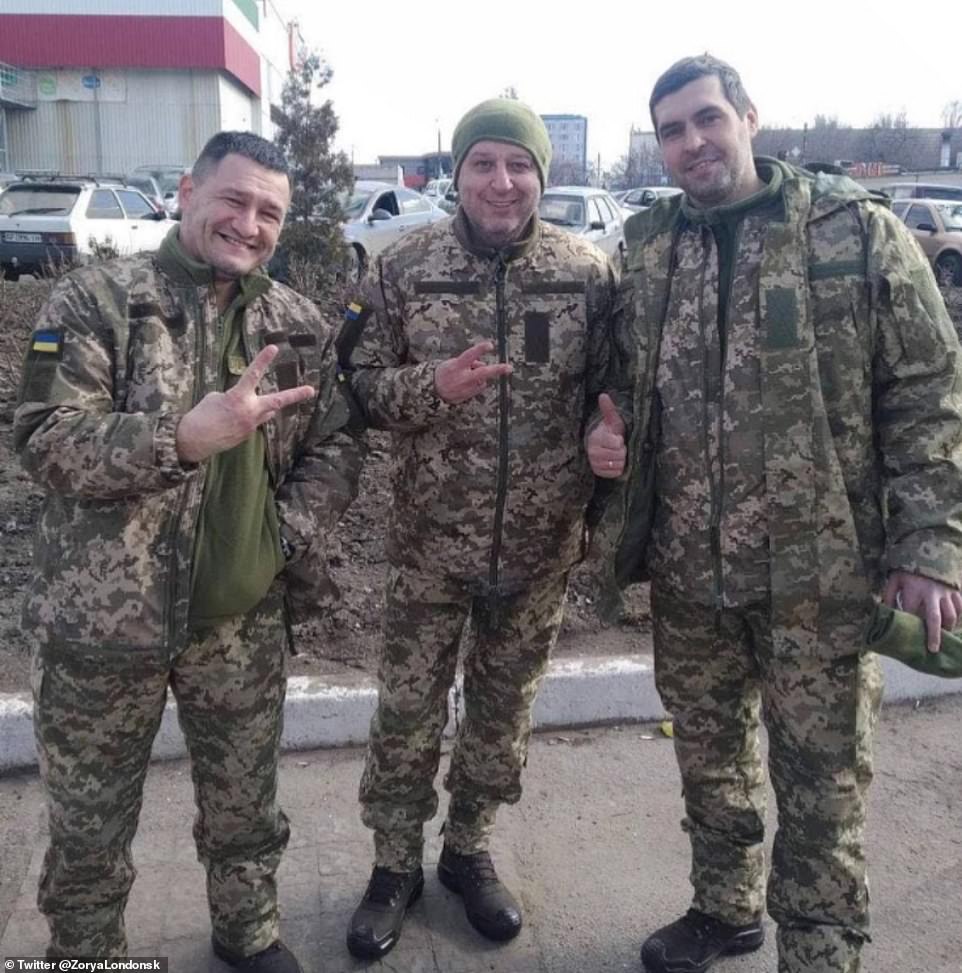 Yuriy Vernydub (centre), who manages Sheriff Tiraspol in Moldova, has returned to his native country to help in the battle against Russia 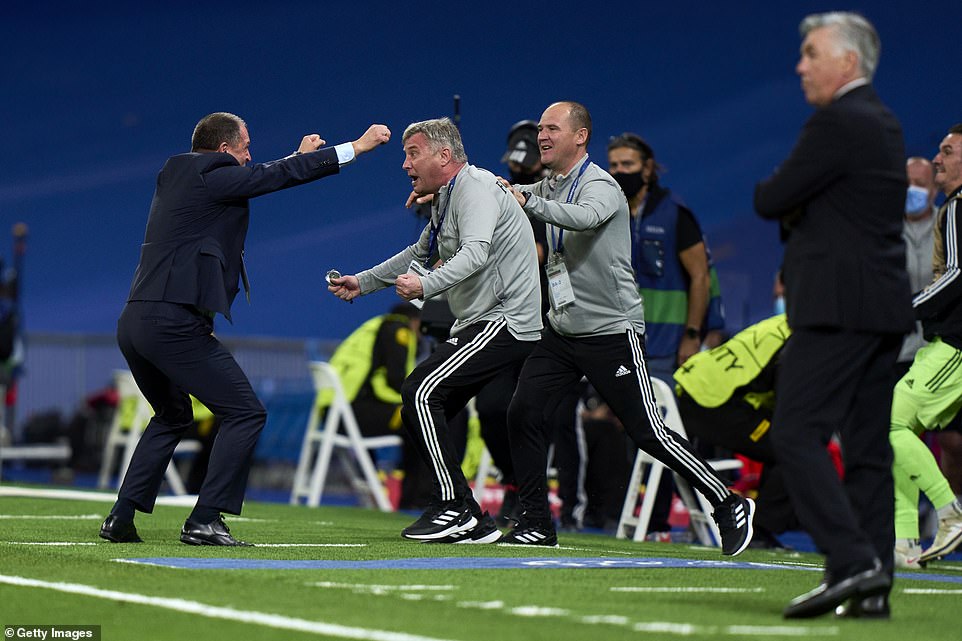 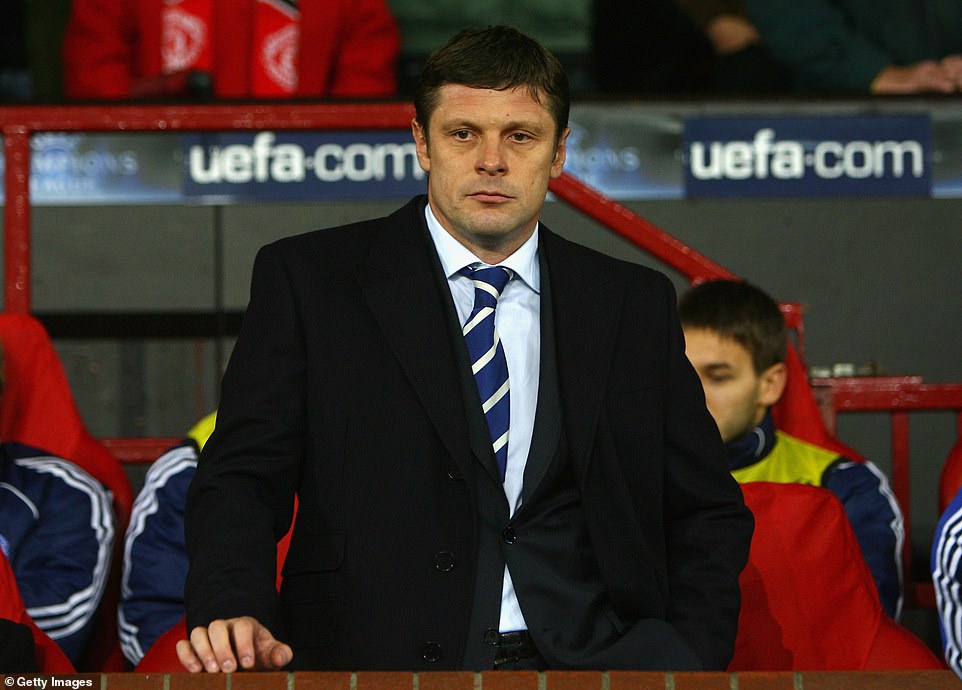 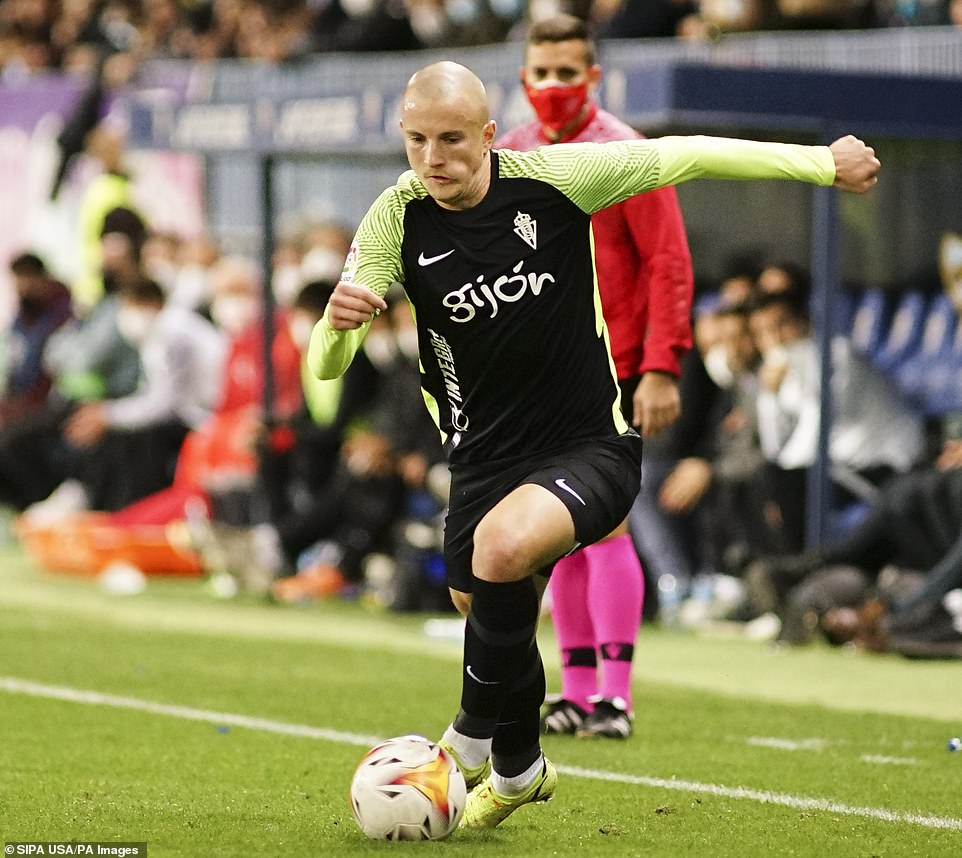 Sporting Gijon’s Ukrainian defender Vasyl Kravets has revealed he wants to go to war, and is willing to put his career on hold to do so.

Mayor of Kyiv since 2014, he continued: ‘One district from here, my little girl is going to school. It is the love, the love for my city, my home, my family, my neighbours, my daughter that has brought me here, that I took this initiative and am now taking part in this territorial defence.

‘I can’t stand still and I won’t. That’s why I signed up for the territorial defence of the country and the city.’

The Klitschko brothers also released a joint video message in Russian, Ukrainian and English on Thursday.

In the video, Wladimir said:  ‘I’m calling to all international partners to observe this tragedy that is happening nowadays in Ukraine.

‘And this senseless war that is not going to have any winners, but losers. I just want to tell you we must stay united against this aggression, against Russian aggression.

‘Don’t let it continue happening in Ukraine, don’t let it happen in Europe and eventually in the world. United we are strong, support Ukraine, thank you.’

Usyk, meanwhile, who was in Sheffield last week to promote an upcoming boxing match, earlier faced accusations he had travelled to the UK to avoid the fighting.

He was quick to refute this, however, after sharing an update on Instagram.

‘Dear Ukraine and dear Ukrainians, some wrote about me running away. Not true, I had a work trip and now I’m back. I’m home,’ he said.

‘Friends, we need to unite together and overcome this, because we are faced with exceptional difficulties.’

‘I’m very overcome with emotions and I’m very concerned for my country and for our people. Friends we must stop this war and we must do it together.’

And today a picture was posted to social media with the caption: ‘Oleksandr Usyk also enrolled in the SAR.’

His friend Lomachenko was initially reported to have left for Greece in the wake of Russia’s invasion, but has now returned to join the battle.

Re-posting a message from local mayor Vitaly Hrazhdan, Lomachenko shared a photo on his Facebook page, dressed in military uniform.

The message read: ‘The Belgorod-Dniester Territorial Defense Battalion has been formed and armed. Boxer Vasyl Lomachenko is in the defense.’

Outside of boxing Sheriff Tiraspol manager Yuriy Vernydub has returned and signed up to the territorial army.

Vernydub was born in Zhytomyr, a northern city in Ukraine, and has made the decision despite an incredibly busy few months in which he and his players gained global fame after defeating Spanish giants Real Madrid in Spain in the group stages of the Champions League.

While busy fulfilling Sheriff’s matches, the conflict in Ukraine was not far from the manager’s mind, prior to him returning to join the army.

‘I have a wife, two children, two grandchildren, brothers and sisters, I wish them health and that this war does not touch them,’ he said last week.

‘When I arrive in Moldova, I will ask to go to my family, if they need my help I will always be there.’

Former Arsenal player Luzhnyi, 53, spent four years at Arsenal between 1999 and 2003, making 110 appearances for them in total. He was also part of the side which won the Premier League and FA Cup in the 2001-02 season, and later left for Wolves.

After hanging up his boots in 2005, he moved into coaching – and had hoped to continue by taking up a job in England. This has been placed on hold, however, after he vowed to help protect his homeland from the Russian forces.

‘The situation is horrific,’ he has told Sky Sports. ‘I want to come to coach in the UK but before anything I will stand firmly and fight for my people, for my country and for democracy.

‘We all hope this will be over soon as innocent lives are being lost and families are being torn apart. A country being invaded and destroyed is all for what? We need to stand together as one and bring to an end this criminal warfare.’

‘We are a country that wants to live in peace. We don’t want to attack anyone, we want to live well and calm. I tell the truth: I want to go to war and help my people.

‘But I can’t help because I don’t know how to shoot, how to move, how to reload a gun…but the truth is that I want to help.’ 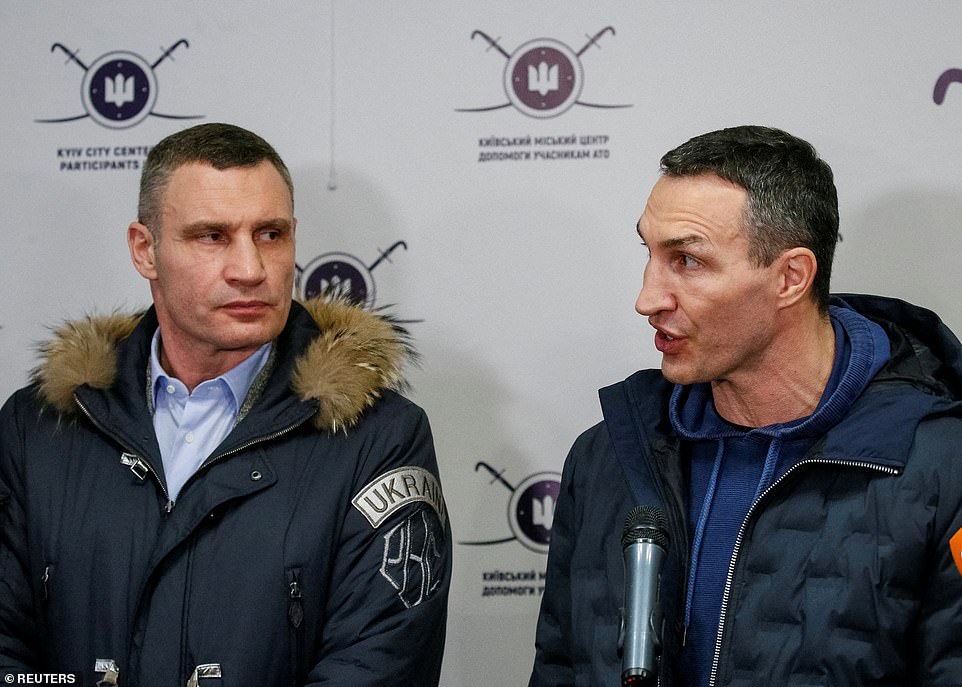 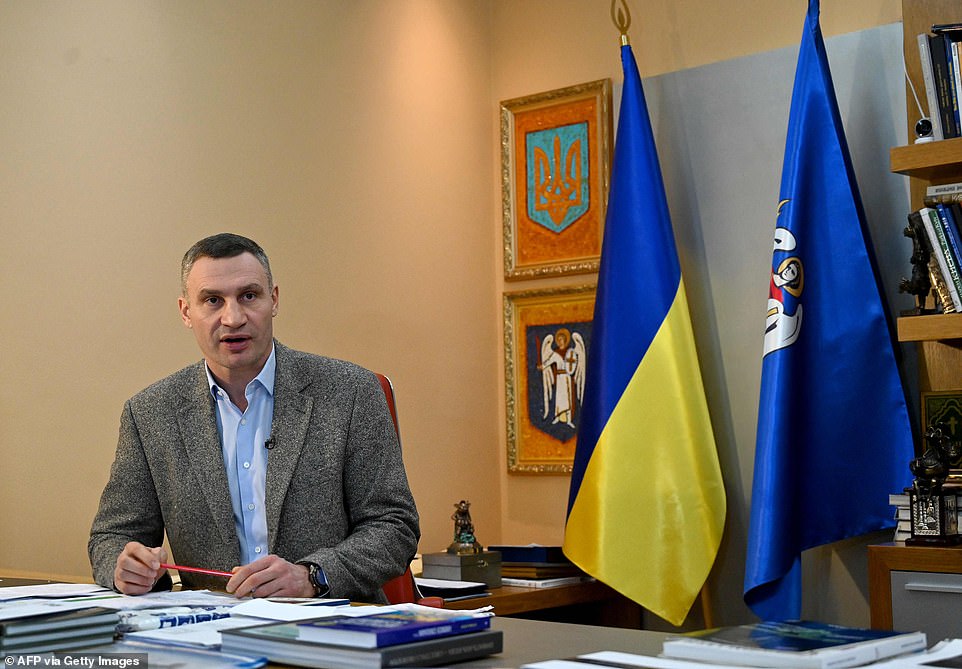 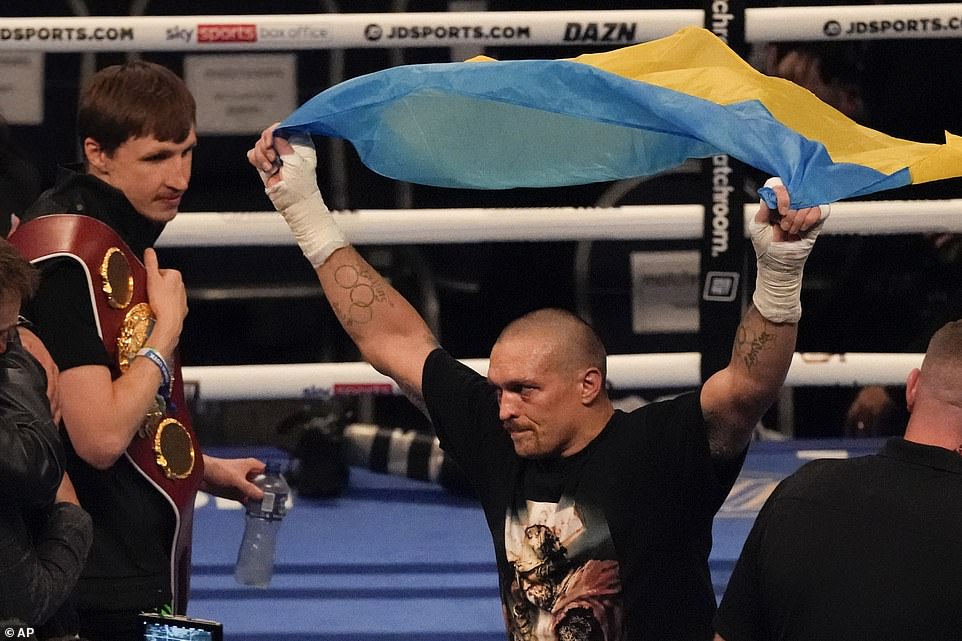 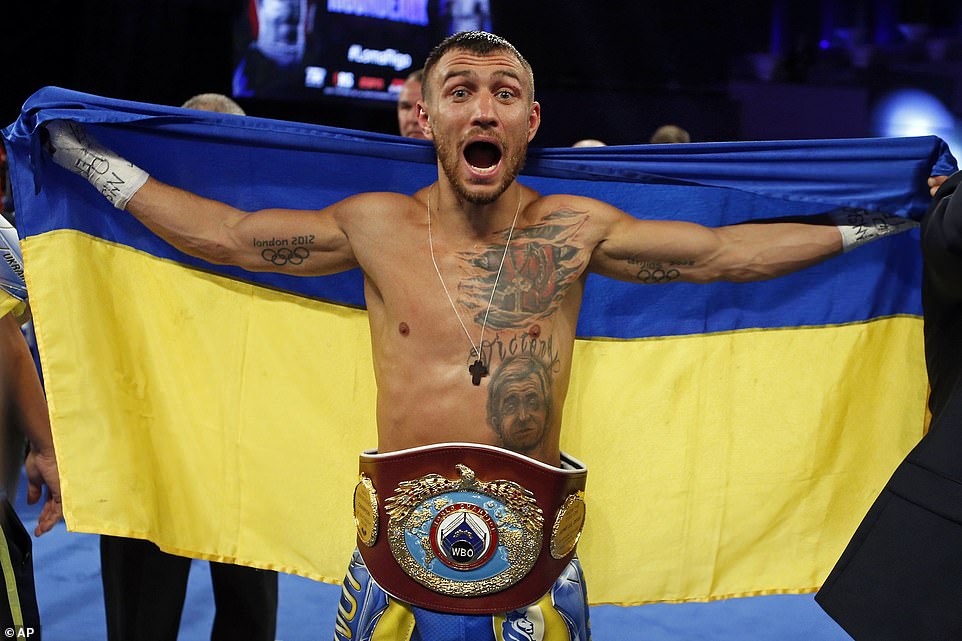 It comes as a smirking Vladimir Putin today ranted about the West’s ’empire of lies’ and banned Russians from sending their money abroad from midnight as worldwide sanctions caused the rouble to tumble and sparked a nationwide rush to withdraw cash.

The currency sank 30 per cent in early trading before easing back to stand 20 per cent down.

Its collapsing value risks wiping out the savings of ordinary Russians, who have been seen flocking to ATMs all over the country to empty their accounts, including in Putin’s home city of St Petersburg.

Putin, though, took another swipe at Western sanctions today during an emergency meeting with economic officials at the Kremlin.

‘I’ve invited you here to talk about issues to do with the economy,’ he told officials with a smirk, adding: ‘I mean of course the sanctions which the so-called Western community – the empire of lies – is trying to implement against our country.’

This afternoon Putin announced a diktat to ban the depositing of cash in any foreign accounts from tomorrow, to stop cash, especially held by rich Russians, moving out of the country and further destablising the economy.

Dramatic video filmed in the Ukrainian capital showed the moment that the night sky lit up with an enormous fire ball that reportedly stemmed from a military radar communication center.

The new explosion took place hours after the Kremlin warned civilians to leave the city via a ‘safe route’ to the south-west, amid fears that the city was about to come under further heavy attack.

The blasts mark some of the most-serious attacks on civilians since the war began five days ago, and came despite Ukrainian and Russian delegations sitting down in Belarus for ‘peace talks’.

Ukraine said ahead of the negotiations that it is seeking a ceasefire and total withdrawal of all Russian forces from its country, with President Zelensky saying he was not hopeful of results but had to try. Moscow would not be drawn on what its ambitions are.

Observers have warned that the talks could pre-sage an increase in violence, as Putin increasingly deploys heavy weaponry that was absent from early fighting in an attempt to force a victory that he has been unable to achieve by subtler means.

US intelligence believes around 75 per cent of Russian forces positioned on the borders with Ukraine are now inside the country.

Though Russian advanced forces have been fighting in Kyiv’s outskirts for several days, the bulk of Putin’s assault force is still located around 20 miles away having been slowed up by determined resistance fighters – with satellite images revealing a huge column of vehicles headed for the city.

The cities of Zhytomyr, Zaporizhzhia, and Chernihiv were also bombed overnight, with air raid sirens sounding in other areas.

In the south, Russians reported capturing the port city of Berdiansk with troops and armoured vehicles shown rolling through the centre, and were closing in on the city of Mariupol which was in danger of becoming surrounded – though remained under Ukrainian control as of the early hours.