The ‘Pac-Man’ video that could clear George Pell: Shamed cardinal’s lawyers will claim evidence that was barred from his trial proves he couldn’t possibly have committed sexual assaults

A 19-minute video prosecutors likened to ‘Pac-Man in a cathedral’ will play a crucial part of disgraced Cardinal George Pell’s appeal against his child sex conviction.

The video shows the layout of St Patrick’s Cathedral in Melbourne and where people were when Pell is said to have sexually assaulted two 13-year-old choirboys in December 1996.

Pell’s lawyer, Robert Richter QC, wanted to use the video in his closing argument to give the jury a visual interpretation of the defence’s version of events, The Age reported.

However, County Court chief judge Peter Kidd refused to allow the video to be shown after prosecutors successfully argued the jury would assume it was an factual portrayal of events, rather than just one version of what may have happened.

Pell’s defence will further argue the disgraced Cardinal was not arraigned properly in front of the jury, meaning he was not able to enter his ‘not guilty’ plea in front of those who would go on to judge him.

The video was created by professional producers, and showed Pell, choir members,  the organist and others involved in the Sunday Mass as separate coloured dots moving around the cathedral. 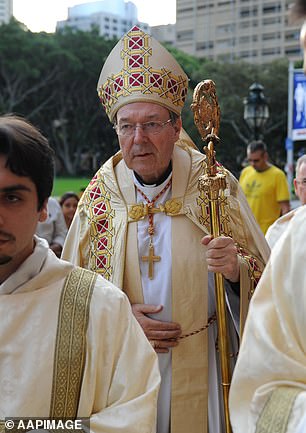 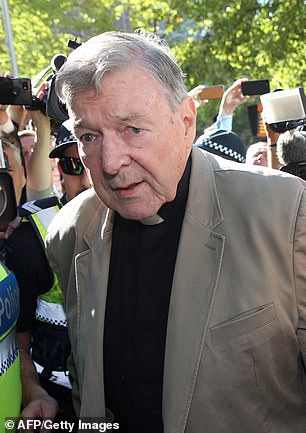 Pell (pictured left in 2011 and right in 2019) was found guilty of four counts of indecent assault and one count of rape by a jury at the County Court of Victoria in December. He was taken into custody on Wednesday and will be sentenced March 13 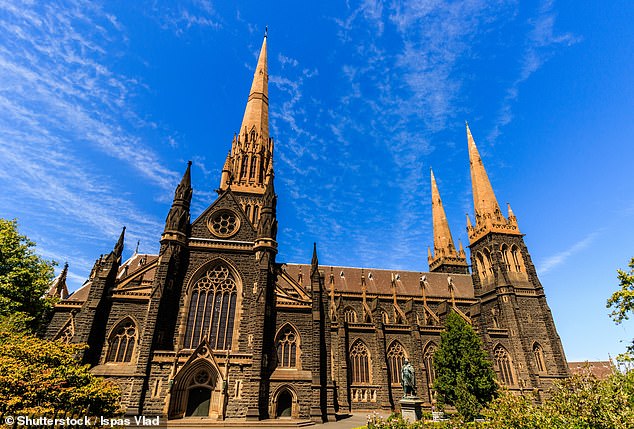 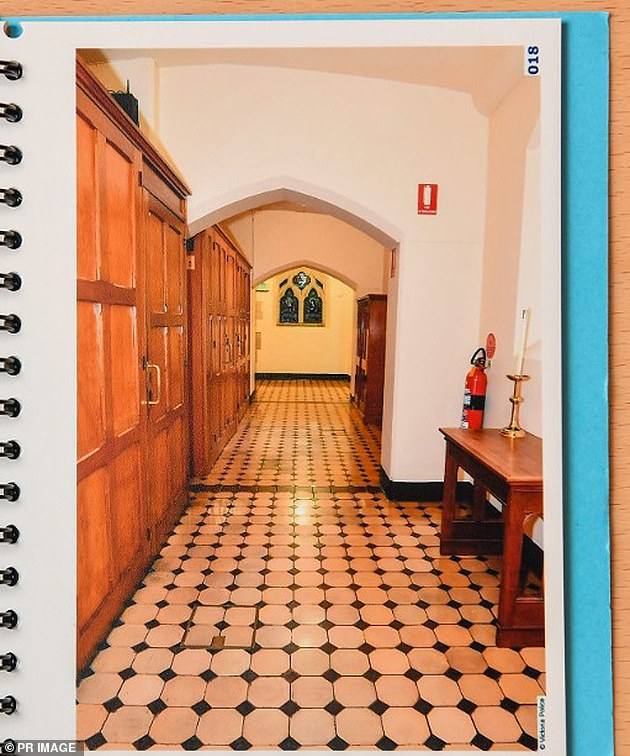 Defence lawyers had argued Pell was out the front meeting parishioners and the sacristy (pictured) was busy when the assault was said to have taken place, and wanted to show the jury a 19-minute video they said would collate their witness statements and show how it wasn’t possible

Pell’s defence had claimed the then-Archbishop of Melbourne had never been left alone, and had been speaking with parishioners on the front steps of the church when the assault was said to have taken place.

His legal team argued the sacristy, where Pell, now 77, exposed himself to the pair before pulling one boy’s head towards his penis, was busy at the time and therefore could not have been the scene of a sexual assault.

The defence also claimed the two young choirboys, only one of whom is still alive, could not have ‘nicked off’ from the procession without being noticed by others.

Pell’s lawyers will also look to prove there were issues with the way the jury of eight men and four women were selected, according to The Age.

Details of the appeal show Pell’s legal team will argue the jury, made of eight men and four women, should have heard him enter his ‘not guilty’ plea, and should not have been allowed to be convinced beyond reasonable doubt Pell was guilty based on the choirboy’s word alone.

‘There was a fundamental irregularity in the trial process, because the accused was not arraigned in the presence of the jury panel as required,’ the appeal, filed by Pell’s barrister Robert Richter QC, reads.

‘The verdicts are unreasonable and cannot be supported, having regard to the evidence, because on the whole of the evidence, including unchallenged exculpatory evidence from more than 20 crown witnesses, it was not open to the jury to be satisfied beyond reasonable doubt on the word of the complainant alone,’ his first appeal ground says.

Pell was found guilty by a jury in December, and on Wednesday, after the suppression order on the verdict was lifted, he was taken into custody.

The former Vatican treasurer has maintained his innocence and will appeal the verdict on grounds including that the verdict was ‘unreasonable’ or ‘unsafe’, his lawyer has reportedly said. 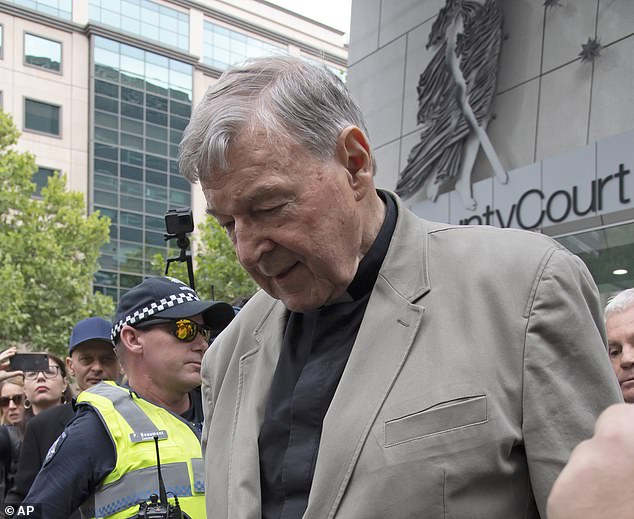 Cardinal George Pell’s last ditch effort to overturn his child sex abuse convictions is expected to rely on the grounds the jury verdict was ‘unsafe or unreasonable’, and could feature a 19-minute video described by prosecutors as ‘Pac-Man in the cathedral’, where key players are represented by colourful dots on a map 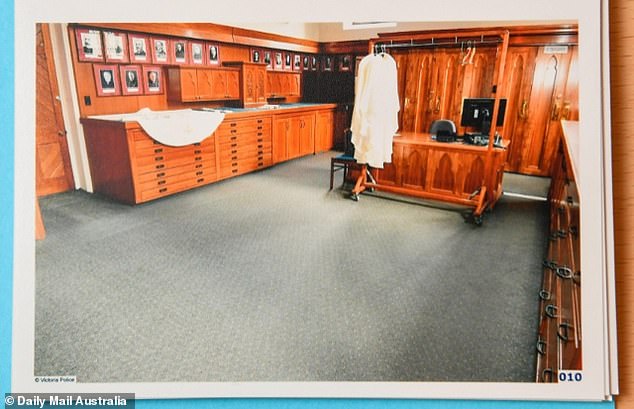 This is the sacristy of St Patrick’s Cathedral in Melbourne, as it looks today and shown to the jury, where Cardinal George Pell molested two 13-year-old choirboys in his ceremonial robes

During the trial, Pell’s lone surviving victim, who is now in his 30s, told the court via video-link how he and his friend were assaulted by Pell when they were 13.

The victim said he and his friend had ‘nicked off’ after a Sunday mass in December 1996 and were caught swigging sacramental wine in the priest’s sacristy by Pell, who had just been appointed Archbishop of Melbourne.

Pell confronted them, told them they were ‘in trouble’, before exposing his penis from beneath his ornate ceremonial robes and molesting the two young boys.

The court was closed for the survivor’s evidence of the events that followed – including his recollection of standing frozen, watching his friend ‘squirm’ as his head was pulled toward Pell’s genitals.

The surviving victim, who cannot be identified, recalled Pell orally raping him and demanding he then remove his pants.

Pell then fondled the boy’s genitals. The teen put his pants back on and together the boys rejoined their choir.

The attack was described by Victorian County Court Chief Judge Peter Kidd as ‘callous’ and ‘brazen’.

He will return to court to be sentenced on March 13, with the Chief Judge Kidd telling the court he is likely to face a significant prison term.

Pell’s appeal will begin immediately after.

By Daniel Piotrowski and Wayne Flower for Daily Mail Australia

The cardinal’s bid to overturn his child abuse convictions will relies on the same grounds successfully used in an appeal by Jill Meagher’s killer, Adrian Bayley.

Pell’s conviction was criticised by commentators  and high-profile supporters such as former Prime Ministers John Howard and Tony Abbott.

A top defence barrister has claimed the 77-year-old has a ‘reasonably good’ chance of successfully appealing the Melbourne jury’s unanimous guilty verdict.

They believe Pell’s lawyers have a case because of apparent flaws in the prosecution’s side of the story. 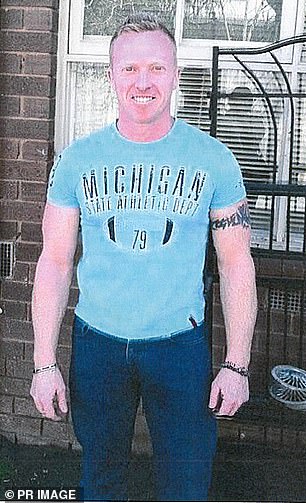 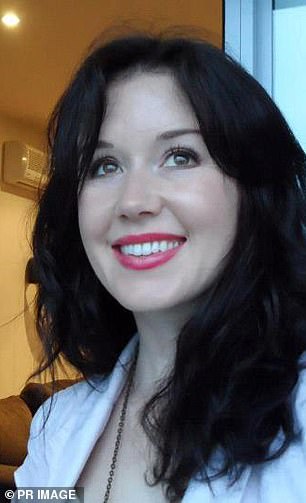 ‘There’s a reasonably good case for an ‘unreasonable verdict’,’ said the experienced barrister, who has run high-profile trials for both prosecution and defence over his career.

‘There does seem to be some real difficulties with the prosecution case.’

The barrister, who asked not to be named critiquing a court case, said the biggest issue with the Pell prosecution case is defence evidence that the brutal sexual assault may not have happened.

Pell’s defence lawyer told the jury he would have always been accompanied by another priest or a sacrister.

The defence said he could not have been alone in the sacristy as the victim claimed.

‘The evidence seemed to demonstrate a genuine unlikelihood there was an opportunity to commit the offence,’ the legal source said.

‘That goes to the question of evidence of whether it didn’t happen.’

But the jury accepted prosecutors’ evidence the two other men would have been tending to other duties at the time.

Other possible flaws in the case included that one of the victims denied the abuse before he died, and the ‘short time period’ where the assaults took place.

That ‘makes it a genuinely arguable case for an unreasonable verdict’, the barrister argued.

But it’s rare to win on unreasonable verdict grounds, although it does happen. 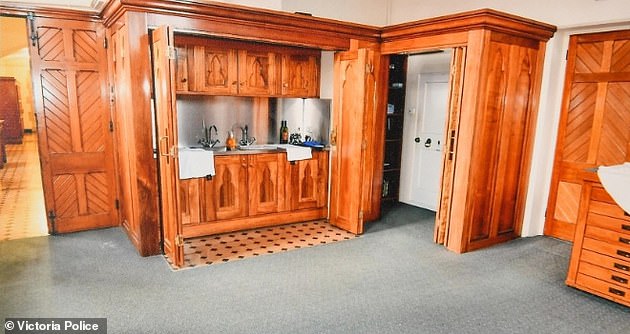 On the other side of the room is a kitchen sink and cabinets next to the altar wine cabinet, a small room with a white door left slightly ajar 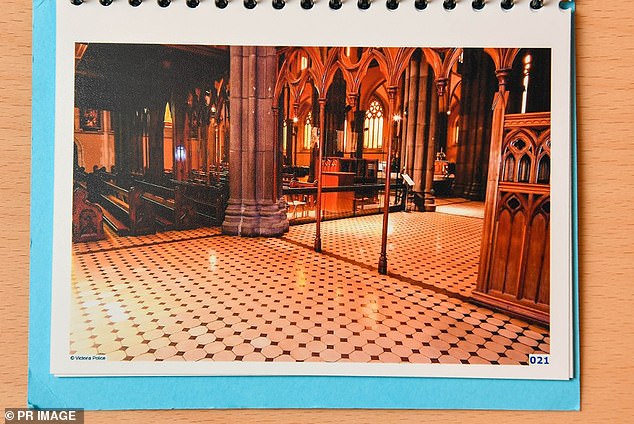 The interior of the ornate Melbourne church, as seen in exhibits tendered in court

If an appeal is made on ‘unreasonable verdict’ grounds, the Court of Appeal will have to review all the evidence provided to the jury.

The court will ask if ‘it was open to the jury to be satisfied beyond reasonable doubt’ that Pell was guilty, the Victorian Criminal Proceedings Manual said.

But the appeals court gives the jury leeway because jurors have actually seen and heard from the witnesses.

Lawyers for Pell may look to similar big name cases where the court has quashed convictions.

Adrian Ernest Bayley, the predator who abducted and murdered Jill Meagher in 2011, had a rape conviction overturned on unreasonable verdict grounds three years ago.

A woman identified Bayley as her own rapist after seeing his image on Facebook in 2012.

She told a jury she could never forget his eyes.

Bayley’s defence argued to the jury that she did not remember the correct colour of his car interior.

A jury eventually convicted Bayley of the rape and Bayley’s legal team appealed.

His lawyers argued the verdict was ‘unreasonable’ because the evidence identifying Bayley was inadmissible in court.

The Court of Appeal agreed and overturned the rape conviction – because the jury could not have convicted Bayley without the crucial evidence.

IS THE COURT OF APPEAL THE END OF THE LINE FOR PELL? 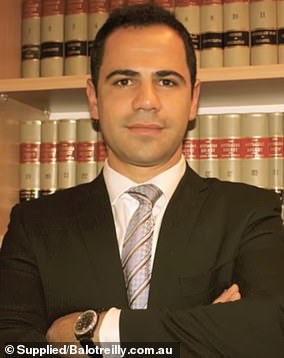 Cardinal George Pell’s options will be limited if the Court of Appeal denies his bid to have his child sex abuse charges overturned.

‘Once leave to appeal is determined an appellant generally can’t have another shot in the court,’ said Mr Balot, of Balot Reilly Criminal Lawyers.

‘(That’s) save for a petition of mercy if fresh evidence comes to light which could demonstrate a miscarriage of justice.’

Mr Balot said appellants can seek leave to appeal to the High Court of Australia ‘in very limited circumstances’.