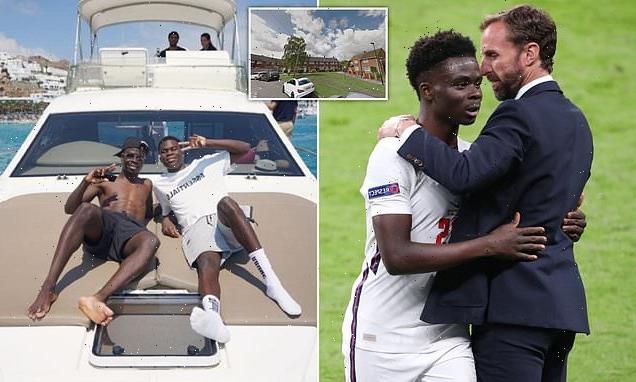 The ‘Little Chilli’ spicing up England’s Euro 2020 hopes: Bukayo Saka, 19, is heating things up on the pitch – but the humble A-star student FaceTimes his father after scoring and still lives with his adoring parents who order him to bed before big games

Bukayo Saka has become England’s Euro 2020 breakthrough star but the teetotal hero and straight-A student still lives with his Nigerian-born parents who always order him to go to bed early before big games.

His man of the match performance against the Czech Republic last night marks an extraordinary journey for the Arsenal winger, 19, who was born five miles from Wembley and is nicknamed ‘little chilli’ by teammates because he spices up attacks.

His Nigerian parents settled in Ealing when they came to the UK in the 1990s as economic migrants to give their unborn children a better life.

But while he wowed on the immaculate Wembley turf last night, it was a scrap of land outside his family’s terraced house in west London where it all began. From the age of three he was playing football on a small green with his father Yomi and older brother Abayomi every night, who were so worn they had to beg him to go inside to bed.

His mother and father worked menial jobs to pay the bills while ferrying their son to football in the evenings and on weekends after he signed for Arsenal aged seven – but were clear that if he wanted to be a professional footballer he must also succeed at school.

Bukayo duly left Greenford High School in the summer of 2018 with four A*s and three As in his GCSEs, with his teachers describing him as ‘the humble boy who achieved his dreams as well as a first-class education’.

After a brilliant season at Arsenal, where he became player of the year, and a turgid performance by England against Scotland last Friday, Saka showed his world class football skills when he replaced Phil Foden and sparked the team into life last night. He was also instrumental in Raheem Sterling’s goal that saw England beat the Czechs 1-0 and win the group.

And like after every game, Bakayo, whose name hails from the West African Yoruba tribe and means ‘adds to happiness’ – will have FaceTimed his doting parents at full time. 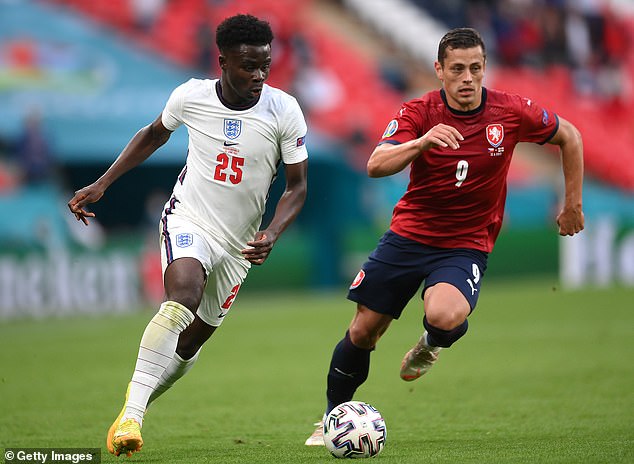 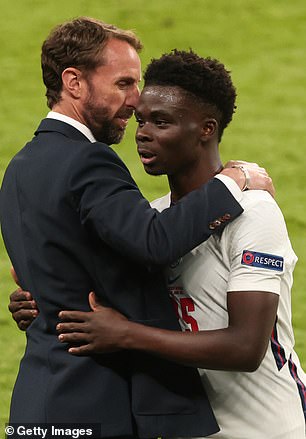 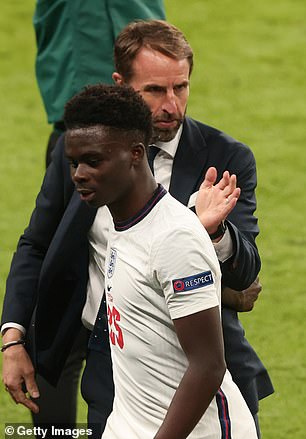 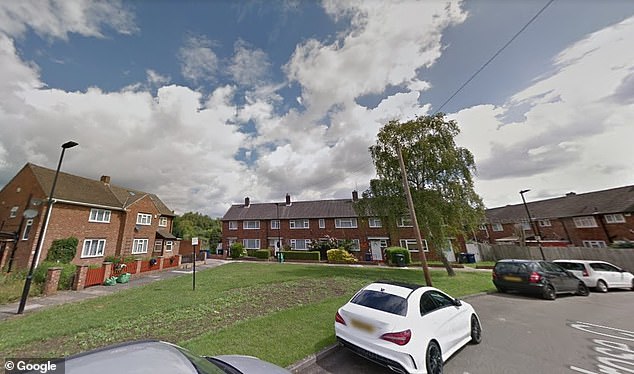 His football career began here on this green in Ealing, where he would play every night with his brother and father from the age of three

After a barnstorming first half Arsenal legend Ian Wright said Saka was ‘burdened with glorious purpose’ – the motto of Marvel anti-hero Loki, the trickster god and adopted son of Odin and brother of Thor. 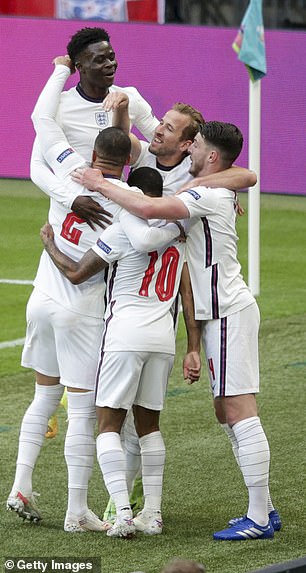 While Arsenal captain Pierre-Emerick Aubameyang has given him the nickname ‘Little chilli’, because he ‘spices up’ the team, even buying him a jacket with a jewel-encrusted red chilli and Saka’s sewed along the front.

His family is his anchor, living with his parents and close to his brother. Bakayo’s Instagram has the biography ‘God’s child’ and unlike other footballers he is not full of pictures of mansions, flash cars, and expensive jewellery, and only has one holiday photo.

He was reportedly the only England player without alcohol on his table in the team’s lounge. He prefers juices, smoothies and milkshakes.

And despite signing a four-year deal earning him a reported £10,000-a-week, he still lives with his parents after buying them a home near the club’s training ground in Barnet. He is believed to be single and goes on holiday with his brother.

He told arsenal.com: ‘From the age of three or four I would be playing football at home with my dad, and my older brother, Yomi.

‘It was always like that. We would play for hours. My dad and brother would want to go back inside but I never let them. We kept playing until I won. I’m serious, you can ask them! As long as they were winning, I wouldn’t let them back inside.’

He added: ‘I still live with my parents, but we’ve moved away from Greenford now, closer to the training ground, and my brother has moved to Reading to go to university’. 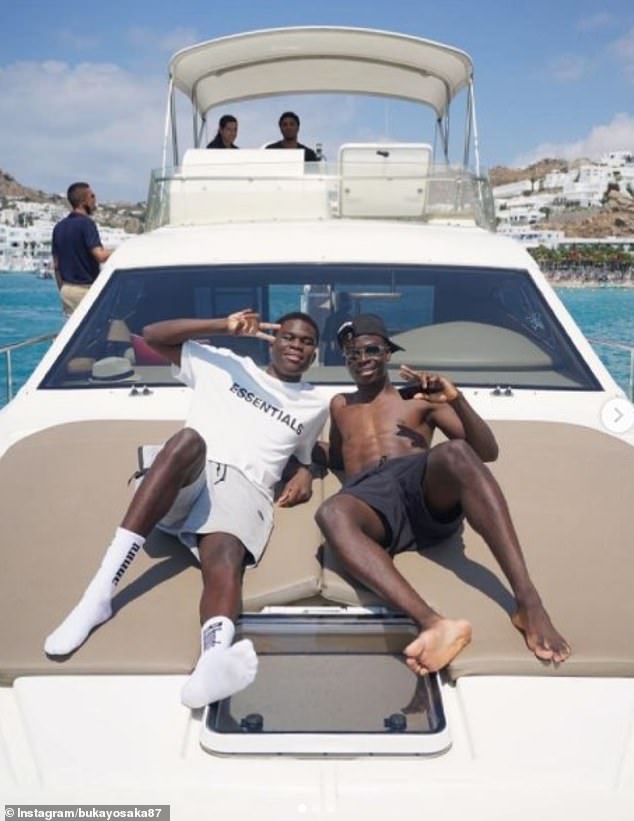 Bukayo Saka, believed to be pictured with his brother Abayomi on holiday, in a rare personal picture on his Instagram

One source close to the star says his feet are firmly on the ground, adding: ‘He’s a brilliant, brilliant kid. Very polite, very courteous, actually very smart and very studious’.

Describing his personality  Neil Dewsnip, who coached Saka for England’s Under-18s, told The Athletic: ‘He’s really quiet, self-disciplined, really focused. But underlying all that is a really dry sense of humour. He’s a cheeky little chap, whose self-confidence is obviously growing all the time.’

Just six months after leaving school he made his first team debut in 2019, aged 17, but the humble footballer chose to praise his family rather than his own performance.

He said at the time: ‘My family were buzzing, they couldn’t stop smiling when I told them. But they managed to put me to bed early to focus on today, they were so happy.’

After the game he tried to speak to his proud parents and brother but was taken away for an ice bath. But he still managed to FaceTime them from the freezing water.

Saka is also a hero to students at Greenford High School in Ealing, where his framed and signed Arsenal shirt is on the wall.

His former PE teacher Mark Harvey told The Times: ‘In the last year of doing GCSEs, Bukayo was out of school with Arsenal quite a bit, but he was brilliant. 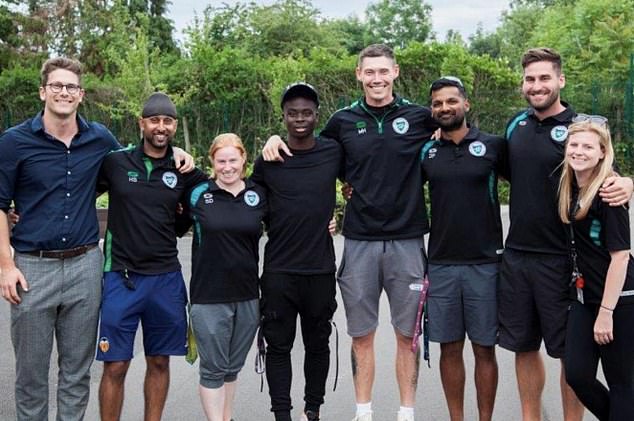 He added: ‘The family were always insistent that schoolwork had to be addressed. Thankfully, Bukayo was brilliant with his studies — and it was never a concern for us.’

For Bukayo there was never any doubt he would choose England over his parents’ native Nigeria.

He said recently: ‘My whole family has been in England like forever. When I grew up all my documents stated that I am English, hopefully Nigerian people will understand’.

From the age of three he was playing football on a small green with his father Yomi and older brother Abayomi every night.

He played for his local club, Greenford Celtic, until he was picked up by Arsenal, aged seven.