New York: You don't often see the words superstar and academic sitting beside each other. But the phrase is used to describe Tim Wu so regularly that he could be forgiven for listing "academic superstar" as the title on his business card.

The professor at Columbia Law School in New York has emerged in recent years as one of America’s foremost public intellectuals. And an unconventional one. 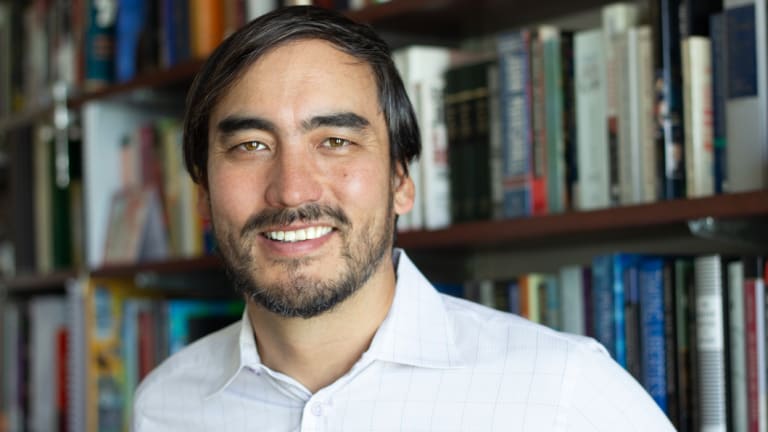 Wu arrives for our interview dressed in sunglasses, a flannelette shirt and beanie. He looks more like a bass guitarist in an indie rock band than an Ivy League professor. The 46-year old used to be a regular participant at Burning Man, an alternative festival in the Nevada desert where clothing is optional and money is banned. A 2006 comedy law revue skit centred on his popularity among female students (“I only took this class so I could stare at him," one performer said).

Wu is best known for inventing the phrase "net neutrality", the concept that internet service providers should treat all web content equally.

He is a prolific contributor to publications such as The New Yorker, The New York Times and Slate – and not just about his academic specialities of copyright, technology policy and competition law. He has also written about his love of dumplings, vintage motorcycles and doing yoga in the Himalayas.

His latest book The Curse of Bigness: Antitrust In The New Gilded Age is a slim tome but has already landed with a thud in the US.

Wu’s central argument is that the US government should break up corporate monopolies – and that it should start with Facebook.

He believes new regulations – such as those proposed by the Australian Competition and Consumer Commission this week – won't do enough to weaken the power of tech giants.

"I think regulation is guaranteed to be ineffective and even has the danger of entrenching these firms as America’s great monopolists," he says over lunch at a diner in Chelsea, in lower Manhattan, near where he lives with his wife and children.

Wu thinks it was a historic mistake to allow Facebook to gobble up more than 70 other companies, most importantly the photo sharing app Instagram in 2012 and mobile messaging service WhatsApp in 2014. US regulators have not made their reasoning for those decisions public, but UK regulators did. They concluded that because Facebook did not have a photo taking app and Instagram did not have advertising revenue they were not competitors.

“It takes many years of training to reach conclusions this absurd," Wu writes scornfully. "A teenager could have told you that Facebook and Instagram were competitors. After all, teenagers were the ones who were switching platforms."

Wu says the mergers could easily be reversed, and Facebook ordered to sell off Instagram and WhatsApp.

Meanwhile, he says the benefits to society would be many. Breaking up Facebook would reduce the amount of user data that can be harvested and cross-referenced. It would also allow competitors with new business models and stricter privacy standards to emerge.

Wu recalls that in the early days, the internet seemed seemed too chaotic and anarchistic for monopolies to form. Powerhouses such as AOL, Netscape and MySpace rose and fell: giants one day, laughing stocks the next.

It even became fashionable in Silicon Valley to argue that monopolies should be celebrated, not feared. PayPal founder Peter Thiel summed up the zeitgeist in a 2014 Wall Street Journal piece titled "Competition Is for Losers".

While Wu thinks the tech sector is particularly ripe for break-ups, he argues that many sectors of the economy are too concentrated. In the US, for example, there are just three major airline companies and three regional cable television monopolies.

Massive mergers have reduced the global seed and pesticide industry to just three players and the global beer industry has consolidated into a single global firm, controlling over 2000 beer brands from Budweiser to Corona to Stella Artois.

Over lunch, I remark to Wu that this all feels very close to home. We are meeting on the day that Nine officially takes control of Fairfax Media, the previous owner of the Herald and The Age, and forms a massive new TV, radio and newspaper company.

Wu primarily blames George W. Bush's administration for the massive corporate consolidation that has occurred in the US. But he says Barack Obama's administration – where he worked for a short stint as an economic adviser – was too "risk averse" to prevent big mergers.

"We let a lot of things go that we shouldn’t have," he says. "A mistake Obama made in his first term was ingratiating himself with the establishment of the Democratic Party. He hired a lot of old-time Washington insiders, people who planned to go back to work for big corporations. They are not going to be very aggressive about taking on big business."

Although smashing up America's biggest companies may sound radical, it isn't a new idea. In fact, Wu is trying to revive a long-lost American tradition.

Taking on monopolies was central to the agenda of Theodore Roosevelt, who served as president from 1901 to 1909. He ordered the break up of Standard Oil – then largest private firm in the world – into 34 constituent parts. He also forced the dissolution of a massive railroad trust into three separate firms.

Roosevelt opposed monopolies not just on economic grounds but because he believed they undermined democracy. If firms became too powerful, they would overpower politicians and undermine the will of voters.

But in later years that idea went out of fashion. A much stricter interpretation – that mergers should only be blocked if they will increase prices – took hold. The US government hasn't ordered a big corporate break-up since telephone company AT&T in 1982.

But now the idea of government intervention seems to be coming back into vogue. "The ground is starting to shift on these issues," Wu says. "A lot of things are being re-examined."

Opponents have labelled Wu and his fellow travellers as the "hipster antitrust movement" and say they advocate a populist, evidence-free approach to competition policy.

"The drumbeat for this revolution is strong and growing, with a broad range of enthusiastic participants and devotees, including public intellectuals and think tankers, as well as prominent members of Congress," George Mason University law professor Joshua Wright and others wrote in a September paper.

The Democratic Party's policy platform, A Better Deal, lists cracking down on corporate monopolies and the abuse of economic and political power as one of its key planks. And several potential presidential nominees, including Bernie Sanders and Elizabeth Warren, are running hard on the issue.

"I personally think a Democratic candidate who doesn’t speak to these issues will not go anywhere in 2020," Wu says. "I expect private power excessive corporate domination of politics to be a litmus test for a lot of Democratic voters."

He believes creating a more competitive economy will not just bring prices down, but reduce the anger and extremism that dominates contemporary US politics.

"A lot of people are questioning the basics of democracy in America now and asking who is in charge," he says.

"Long term, if the public doesn’t get what it wants and feels like it is powerless, it is very dangerous. It leads to conditions ripe for revolution."