THESE are the 10 places on UK's coronavirus watch list, according to data from the COVID Symptom Tracker app.

Halton in Cheshire has become the latest hotspot, while Luton has also been added to the list – making it the only area in the south of England. 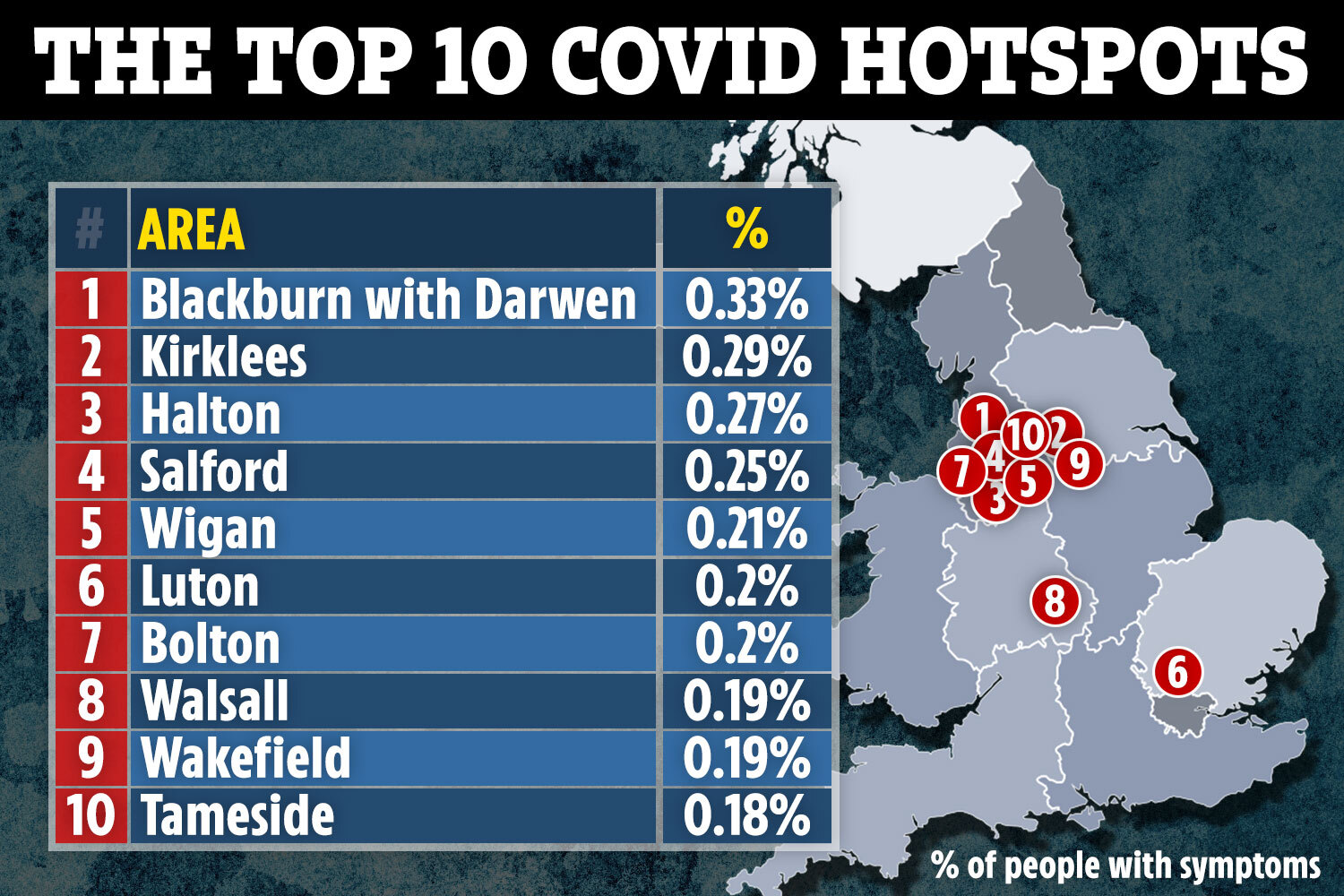 Blackburn and Darwen remains at the top of the list – where it has been for the past three weeks – followed by Kirklees, which has also moved up from fourth place last week.

Salford has dropped from being in the second spot last week down to fourth this week, while Wigan has moved up into number five from ninth last week.

Experts behind the app say that so far their predictions have been accurate having pinpointed Salford, Bolton, Blackburn and Darwen, Calderdale and Kirklees a week before the government identified them as areas of concern.

Tim Spector, professor at King's College London who is leading the app study, said: “We are really pleased to see that our Watch List is accurately identifying the areas of concern.

"We created it so that the government can do targeted testing and use solid data to lead decisions about local lockdowns and extra precautions."

The app, which has 3.5 million users, relies on people logging their symptoms on a regular basis and reporting results of Covid tests. 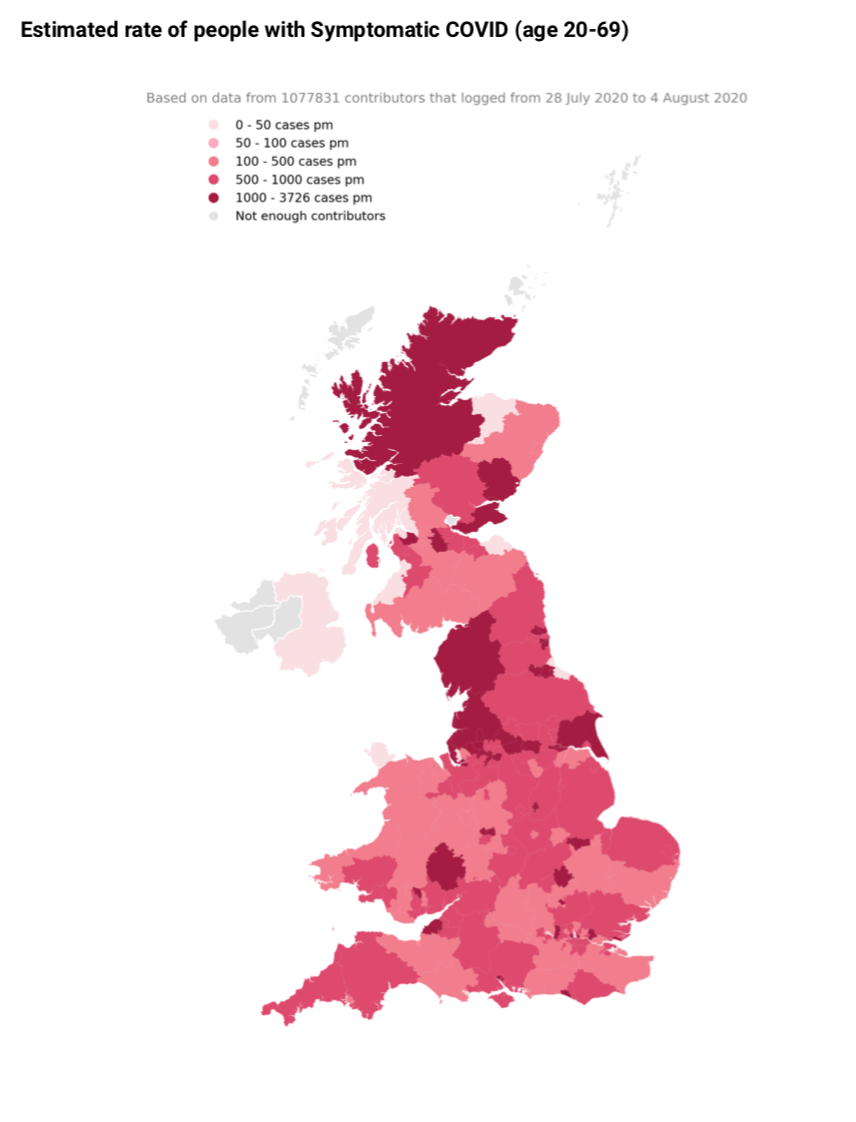 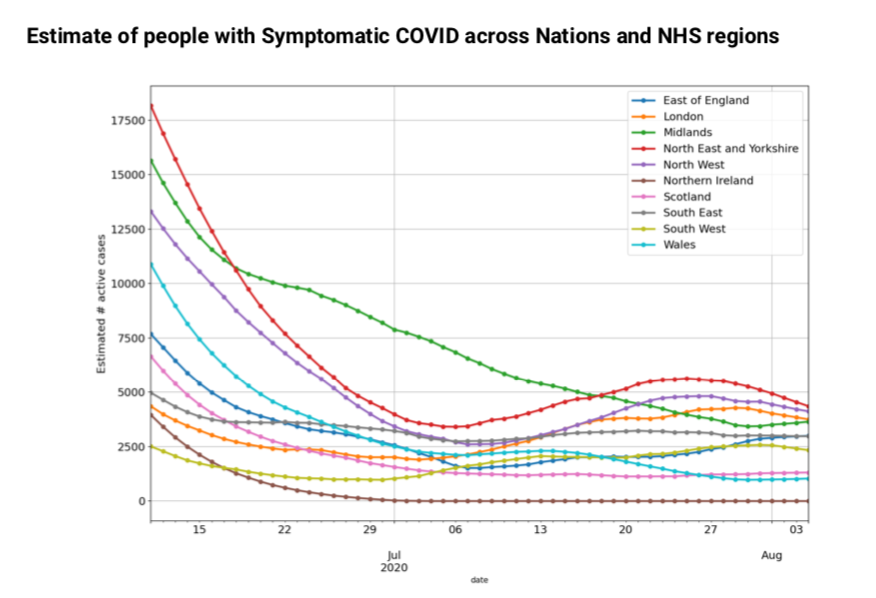 Prof Spector added: "We urge people to continue logging in the app and encourage others as it’s their data that allows us to find out about the situation in their local area.

"We want to avoid another nationwide lockdown, so obtaining good local data is crucial."

Latest app figures also show that there were an average of 1,626 daily new cases of Covid in the UK over the fortnight up to August 1, excluding care homes.

The numbers are based on data from 12,092 swab tests done between July 19 and August 1.

Meanwhile, the latest estimated prevalence figures show that 26,512 people currently have symptomatic Covid in the UK.

It also suggests that over the last few weeks, the amount of symptomatic Covid nationally has remained stable, although is still higher than in early July.

The numbers are still higher in the North of England but the numbers have slightly decreased since last week.

These figures remain in line with the latest data from the smaller survey by the Office for National Statistics which estimated 35,700 people in England were infected with Covid in the week July 20 to July 26. 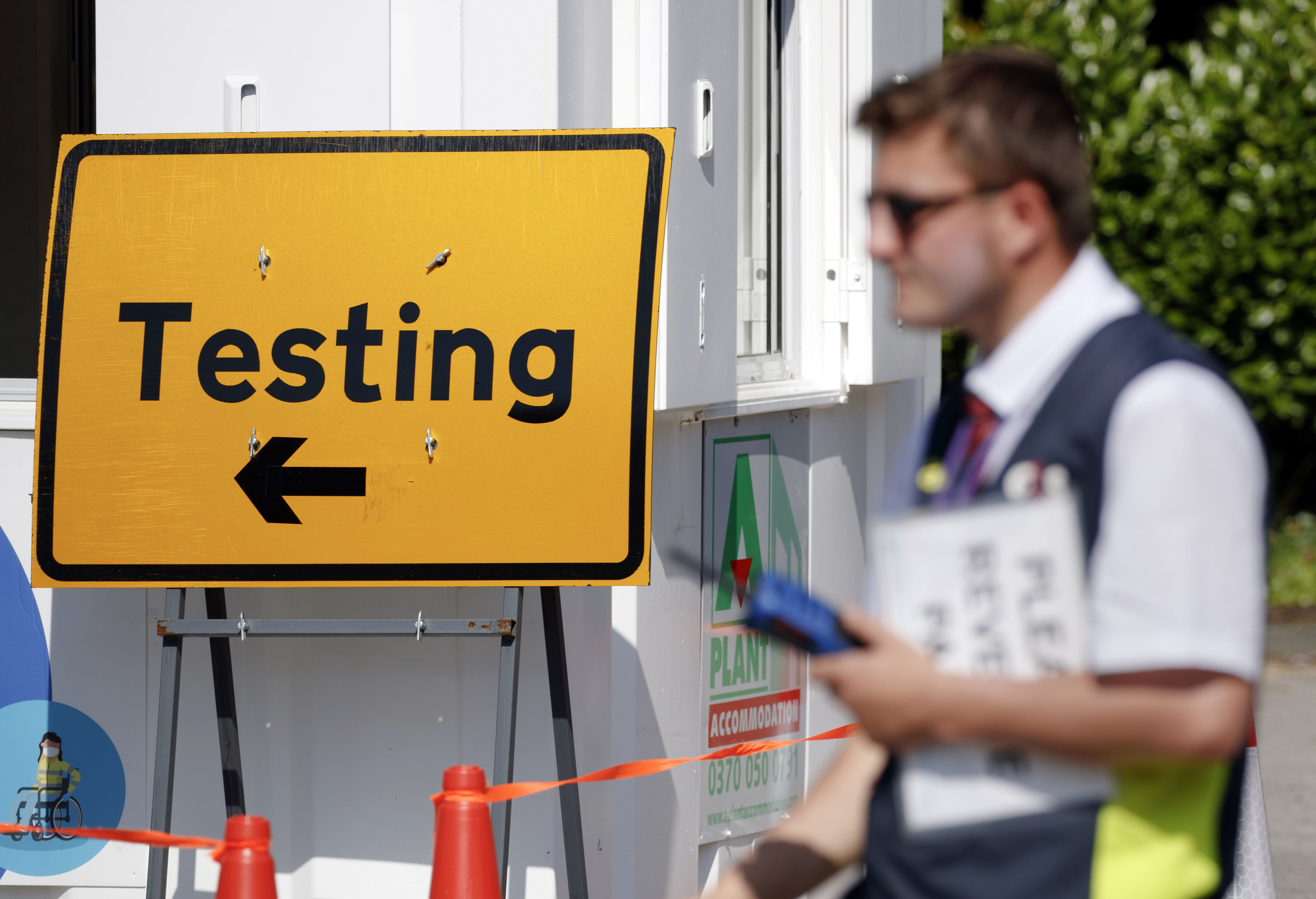 It comes as a separate report found coronavirus infection rates continued to decline even when some lockdown restrictions had been lifted.

The research, conducted by Imperial College London and Ipsos MORI, involved 150,000 volunteers across England being tested for Covid-19 between June 19 and July 8 to determine the scope of the spread of the virus throughout the country.

An initial report from the study, released last month, found that the rate of infection throughout the country was halving every eight to nine days during May.

The study's second report has now revealed there was further decline of infection in late June and early July, with the virus continuing to halve every eight to nine days during this period before ultimately falling to just under eight positive cases per 10,000 people. 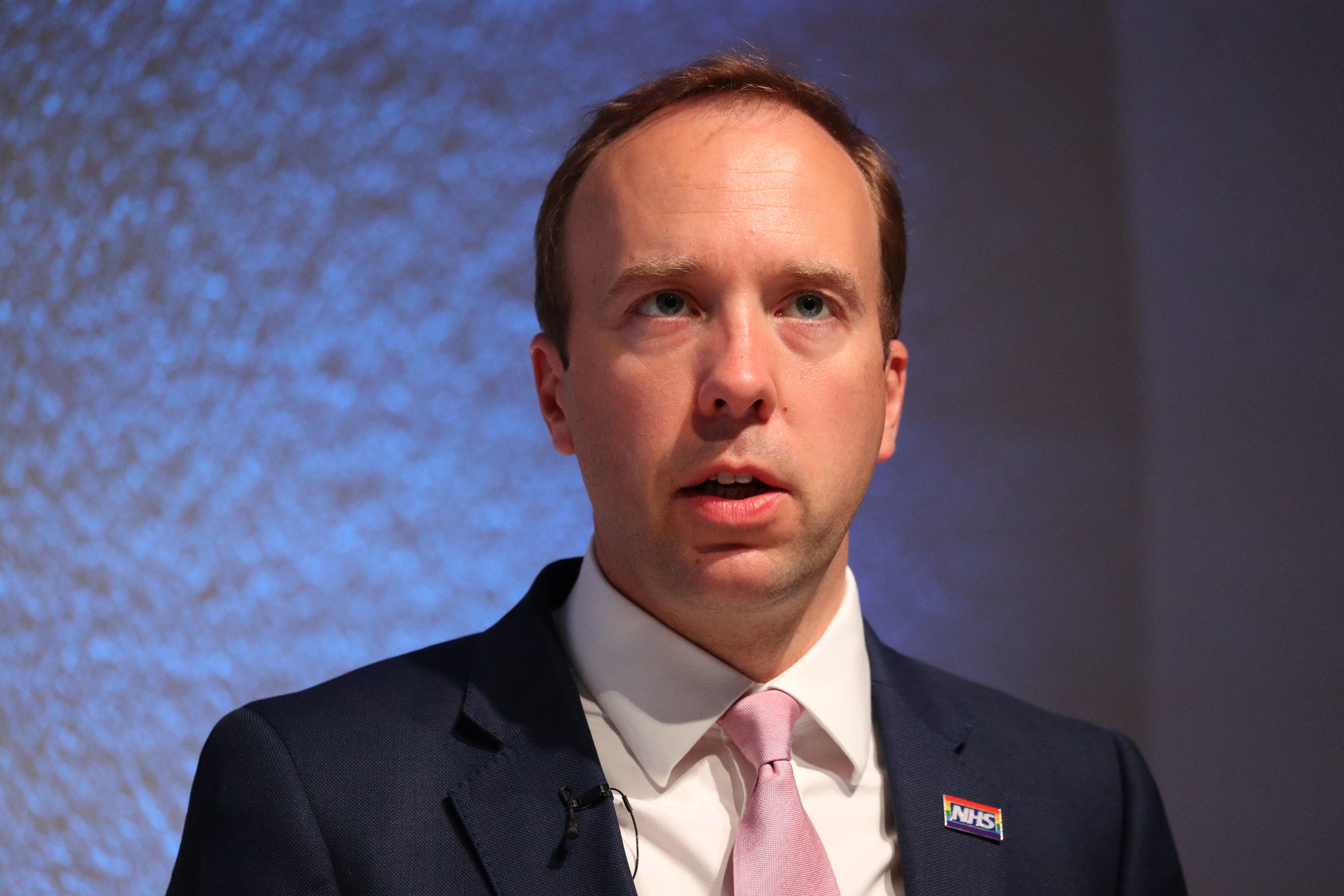 This was despite the reopening of non-essential shops and restrictions being eased to allow the public to have more interaction with people outside their households.

In contrast to the first report, the second report also showed there were no significant differences between the rates of infection for key workers and non-key workers.

Health Secretary Matt Hancock said this demonstrates the effectiveness of the country's infection control measures in limiting the spread of the virus in care homes and hospitals as well as the wider community.

I urge everyone to get a test if you have symptoms, self-isolate and provide your contacts to NHS Test and Trace

He said: "This research highlights how, thanks to everyone's efforts and sacrifice, alongside targeted measures to counter the spread of this virus in health and care settings, we were able to keep rates of infection low as some restrictions were lifted.

"However, we must not be complacent. I urge everyone to get a test if you have symptoms, self-isolate and provide your contacts to NHS Test and Trace so we can continue to keep the virus at bay and get back to normal."

Among the other significant findings from the report was the average number of people infected with Covid-19 falling from 74,000 in May to 39,000 in June/July and no significant differences being detected in the rates of infection by age.

However black, Asian and other ethnic minority individuals were still more likely to test positive than those of white ethnicity.

Another study, focusing on the presence of Covid-19 antibodies throughout the community, is currently underway.