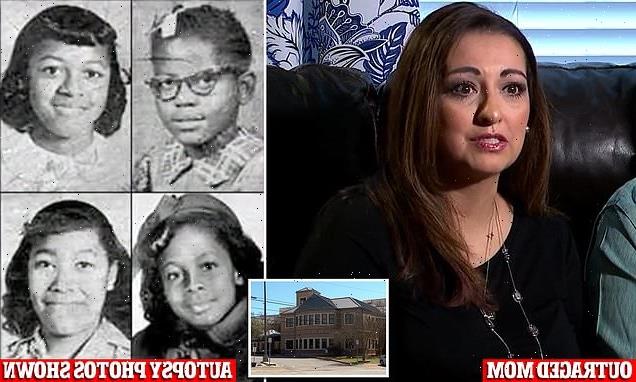 Parents in Texas have told of their anger after their fifth grade daughter was left in tears after an immersive introduction to segregation before being shown autopsy photos of four black children murdered by the Ku Klux Klan.

Students at Leon Springs Elementary in San Antonio, which has 524 pupils from kindergarten to fifth grade, were taught about segregation in January.

During the class, the children were separated into groups of dark haired and fair haired students.

They were then given a series of tasks and duties.

The dark-haired students were deemed privileged, and told they were superior, with youngsters who had blond or red hair deemed less intelligent and inferior.

Both sets of students were given a puzzle to complete, but the light-haired students had a piece missing.

The light-haired students also had to clean up after the other group at the end of the exercise. 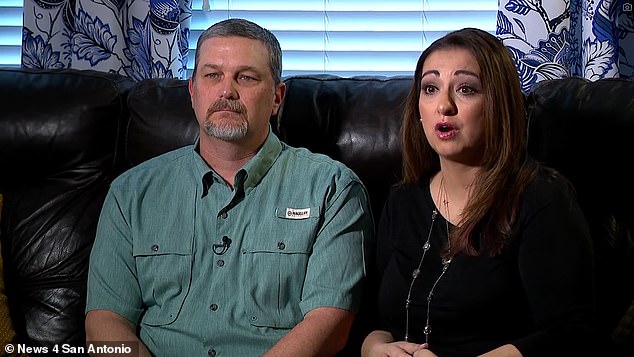 Mike and Brandi Lininger, whose 10-year-old daughter attends Leon Springs, said they were angered by the segregation class at the school, which left their child disturbed 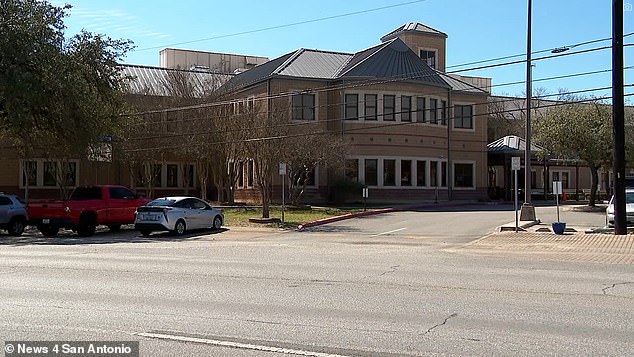 Mike and Brandi Lininger told News4SA that their ten-year-old daughter was upset by the lesson, and that some of her classmates were reduced to tears.

‘She was hurt, her friends, and she named to the principal and to district officials, names of her friends that were crying,’ said Brandi Lininger.

She said the class was also shown Spike Lee’s 1997 documentary, 4 Little Girls, about the 1963 bombing of an Alabama church by the KKK.

Four African-American girls around the same ages as the class – between the ages of 11 and 14 – died in the attack.

The film includes graphic autopsy photos of the girls’ bodies.

The class teacher said she fast-forwarded the autopsy pictures, but the Lininger’s said the children in their daughter’s class did see the graphic photos.

‘The things that she said that she skipped over, my daughter was able to describe to us to a T,’ said Mike Lininger.

‘So that night our daughter was unable to go to sleep in our own room, she was scared.’ 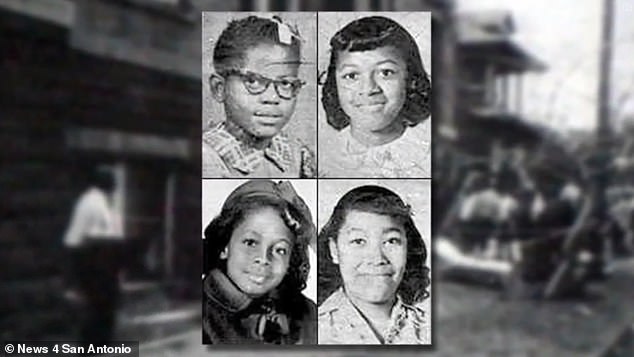 Spike Lee’s 1997 documentary, 4 Little Girls, was shown to the class. The film tells the story of the murder of four church-going girls in the Alabama bombing of 1963

The Liningers said they were mainly angered that they were not given advance warning.

‘They send us notes and newsletters about everything else,’ said Brandi Lininger.

‘Your child is going to see The Polar Express and it’s pajama day on Friday before winter break, and we get no notice that they’re going to do a social experiment on segregation.’

The class was based, News4SA reported, on an exercise devised in the 1970s by a teacher named Jane Elliott, now an internationally known diversity trainer and lecturer. 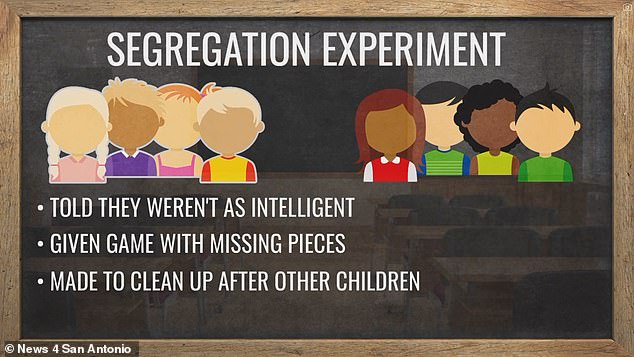 Elliott’s original exercise labeled students as inferior or superior based solely on the color of their eyes and exposed them to the experience of being a minority.

Over the years other teachers have copied the experiment, sometimes using hair color as the distinguishing factor.

The school district, Northside Independent School District, told the channel that they had reviewed the complaints about the lesson from the Liningers – which were confirmed by another family – and decided not to repeat the class.

‘The activity and video in question were part of a larger fifth-grade project-based lesson around the inequity of segregation,’ the school said in a statement.

‘While the campus did receive positive feedback from several parents, district and campus administration recognize the parent’s concerns and agree that the activity and video are not age-appropriate and will not be used again.’

The lessons comes amid nationwide discussion over similar ‘equity’ lessons being foisted on children by woke school boards, which critics say have their origins in critical race theory.

Supporters say they offer an important insight into the everyday prejudice faced by black Americans, but detractors have branded them inappropriate and divisive.