A shopper noticed that staff at a branch of the supermarket giant  stacked tubs of Quality Street, Celebrations and Heroes several feet high in what is supposed to be a treat free zone. 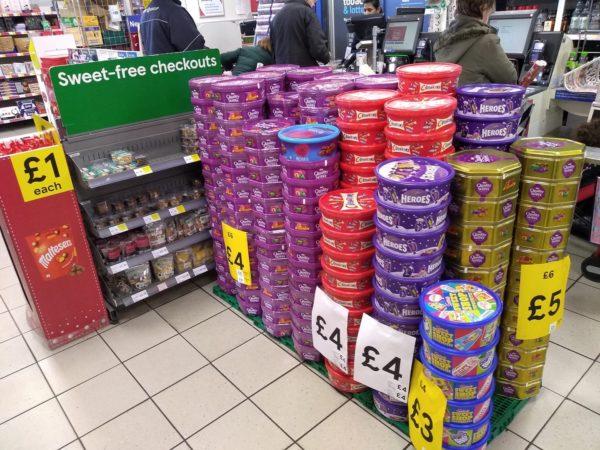 Tesco announced in 2015 had removed all sweets and chocolates from its checkouts in all its supermarkets across the UK.

It was meant to “help customers lead healthier lives” and to reduce “pester power” of kids nagging parents for sweets.

The picture was posted on the Bleeding Cool website by Rich Johnson, who said Tesco “virtue signalled” the move banning sweets with a “sweet-free checkouts” sign.

“Those signs are still up. Their commitment to what the signs actually say is less visible. Especially at Christmas,” he wrote.

“Here’s Tesco this morning, just across from the cinema in Kingston.”

The post and picture was shared on Reddit by user “grishnackh” alongside the caption “good work Tesco”.

One user suggested the festive period had caused the mix-up: "It's Christmas all rules go out the window when it comes to food."

Another posted: “Plot twist, they're all filled with various knitting bits.”

Earlier this year, Tesco were ridiculed for offering what a shopper described as one of the most pointless discounts ever.

Nutritionist Lenka Garstang, 37, stumbled across the microscopic saving while on a visit to a branch in Lincoln with daughter Ellie.

They discovered a pot of olives previously priced at £4.50 had been reduced to… £4.49 – a saving of one single penny.

Tesco has been approached by The Sun Online for comment.