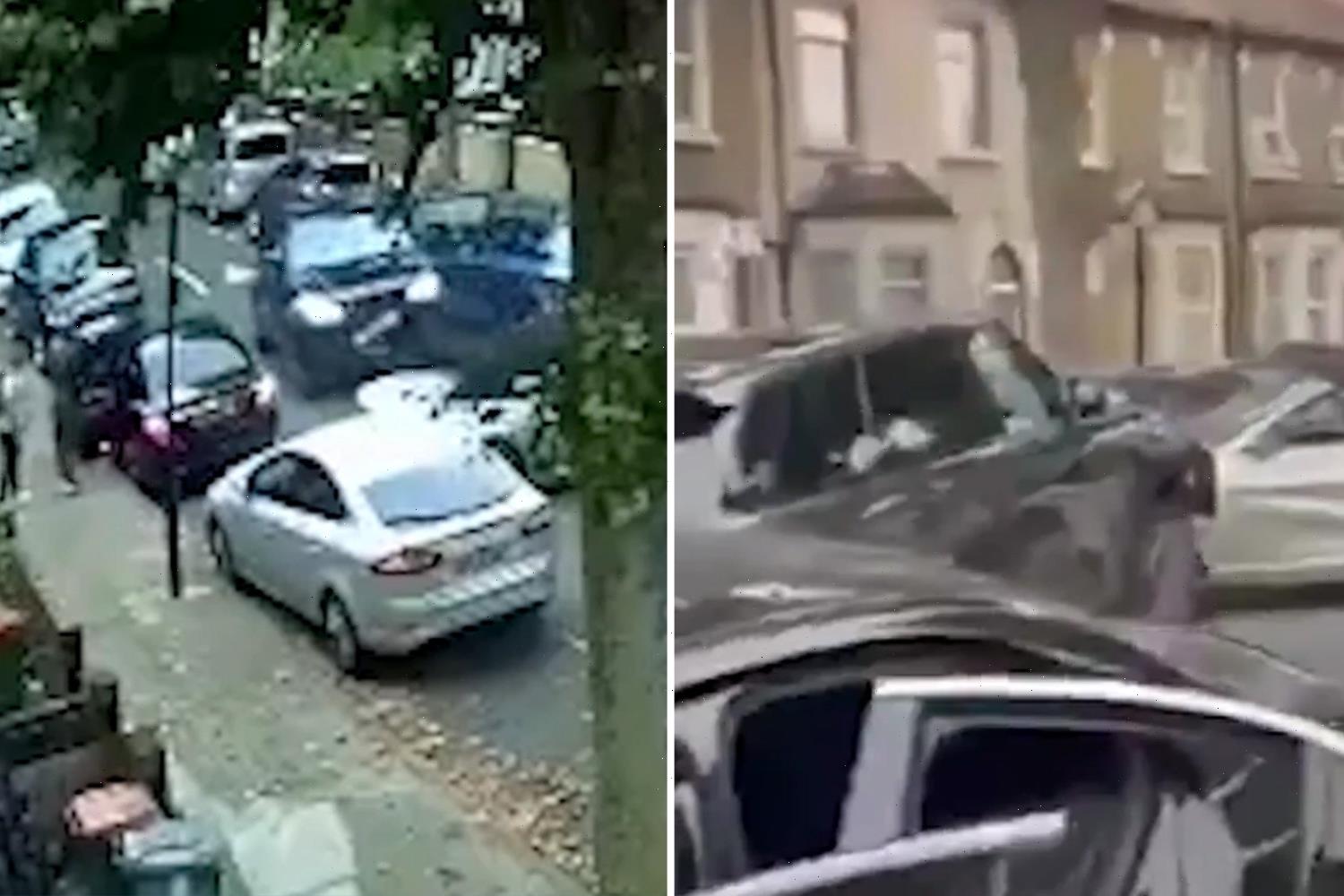 THIS is the horrifying moment a driver repeatedly rammed a car with two kids inside on a residential London street.

The motorist was behind the wheel of a Range Rover when they launched the shocking road rage attack on a BMW 6 Series travelling in the opposite direction. 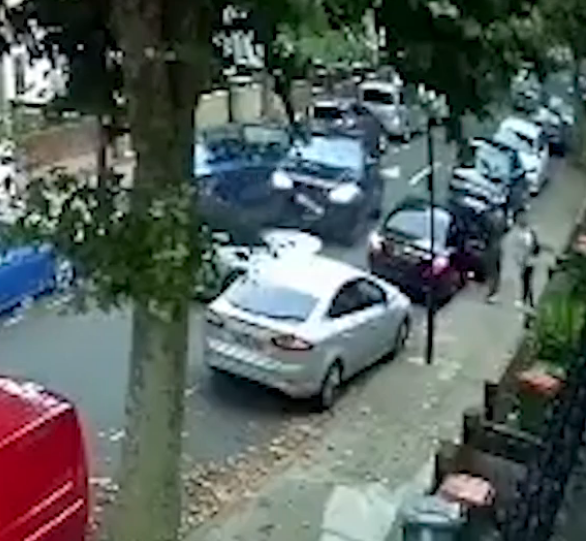 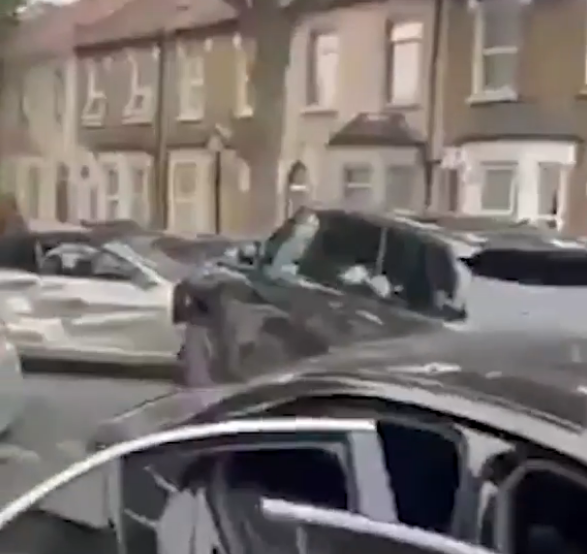 CCTV footage captured at the scene shows the bigger car shunting the BMW along the road before it spins sideways, hitting two parked cars.

The SUV keeps ploughing forwards before suddenly shifting into reverse and hurtling backwards, smashing into two more cars parked at the side of the road.

Residents can be seen rushing from their homes to help those inside the BMW – but all are forced to leap out of the way as the Range Rover pulls forward at speed, crashing into the BMW again.

The big car is then used as a battering ram as the driver takes aim over and over again, reversing back before hitting the BMW.

More video filmed from the pavement captures the sounds of panic as the 4×4 crashes into the stricken car at speed.

Smoke billows from the tyres as the driver hits the accelerator in a bid to shunt the BMW clear.

Finally, the Range Rover forces the 6 Series to the side of the road before heading off at speed.

The resident pans around the street, showing the damage caused during the terrifying incident.

It's believed 13 cars – 12 of them parked – were totalled altogether.

Locals say the Range Rover had been stolen moments before the shocking scenes in quiet Benson Avenue, East Ham.

One social media user said: "The Range Rover was stolen a few streets down and being chased by the owner.

"The BMW was coming the other way and was about to pull into a space.

"The Range Rover decided to start ramming him to get away.

"The car was abandoned at the end of the road.

"BMW had two young kids inside."

Officials from the Met Police said: "Police were called to Benson Avenue, E6, at 16.46pm on Sunday to reports of a Range Rover car colliding with a number of other parked vehicles.

"Officers attended. A group of at least 10 vehicles were found to be damaged and it was reported that one vehicle, containing a man and two children, had been pushed onto a footpath.

"The Range Rover had been reported stolen from Melford Road, E6, a short time before the collisions.

"The driver left the vehicle and got into a another vehicle before police arrived.

"There have been no arrests. Enquiries are ongoing."

No one needed to be taken to hospital following the incident.

It comes just two months after a moron driver fleeing police dumped a 4×4 on train tracks after smashing through a closed level crossing barrier.

The motorist drove along the line past stunned commuters in Cheshunt, Hertfordshire.

He sped off during an earlier police stop – injuring two cops.

One commuter said the manic driver was dicing with death.

“There are about six or seven trains an hour around then and he missed rush hour by such a small margin," they said.

"It’s just crazy, it could have been horrendous.”

A 34-year-old man from Ipswich will face a trial after pleading not guilty to a string of charges, including assaulting an emergency worker, theft of a vehicle and criminal damage. 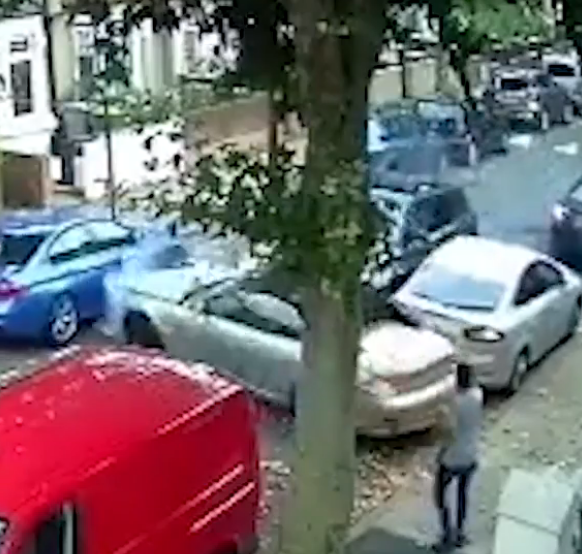 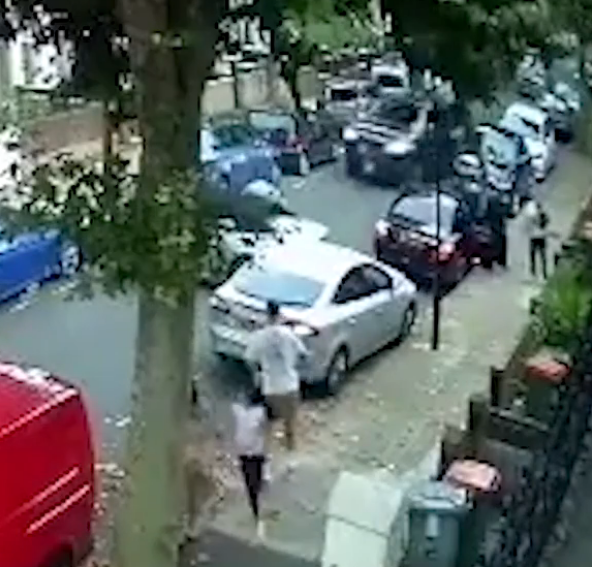