Religious exorcisms are being carried out in an Indonesian town in a drive to ‘cleanse’ LGBT people of what clerics call ‘their sickness’, as homophobic sentiment continues to rise in the Muslim-majority nation.

There has been a sharp escalation in homophobic rhetoric and a spike in the number of arrests of members of Indonesia’s LGBT community recently.

Police in Padang have arrested 18 couples – 10 lesbian women and eight individuals who identify as transgender – in an effort to get them ‘psychological support and rehabilitation’, ABC News reported.

In Indonesia, the general consensus is that mental health problems caused by demonic spirits called ‘dijinn’ are to blame for homosexuality and transgenderism, and that some sort of exorcism or ruqyah is needed to ‘cure them’. 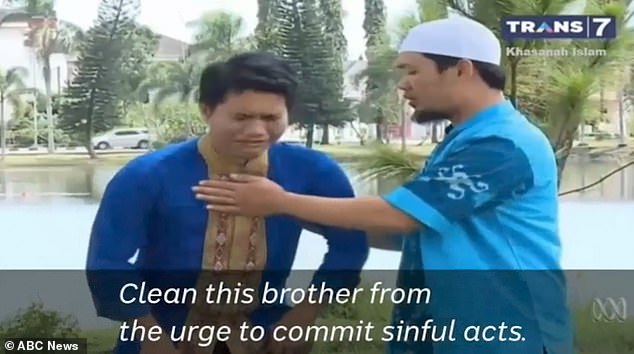 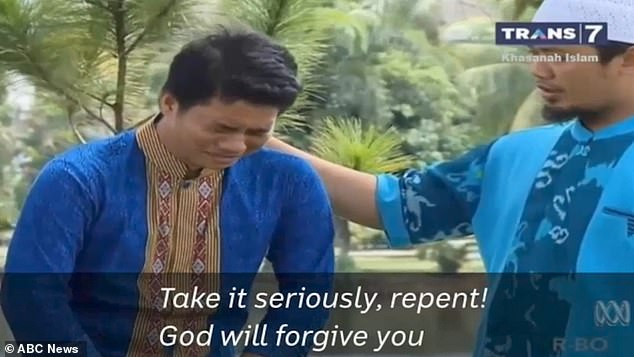 There has been a sharp escalation in homophobic rhetoric and a spike in the number of arrests of members of Indonesia’s LGBT community recently, with some officials even going as far as calling for LGBT people to be ‘rehabilitated’

Shocking and homophobic video footage from a television show in Indonesia shows gay men being exorcised in front of a camera by what appear to be some sort of Muslim cleric in an effort to ‘cleanse’ or ‘cure’ them.

The footage shows the men lying on the floor, clearly in a distressed state, being told by a man standing over them to ‘Take it seriously’ and ‘To repent’ so that ‘God can forgive them’.

Thousands of anti-LGBT demonstrators have been taking to the streets, with the latest protests in Bogor, just outside the Indonesian capital Jakarta, on November 9 heightening fears that this may encourage the authorities to step-up their crackdown. 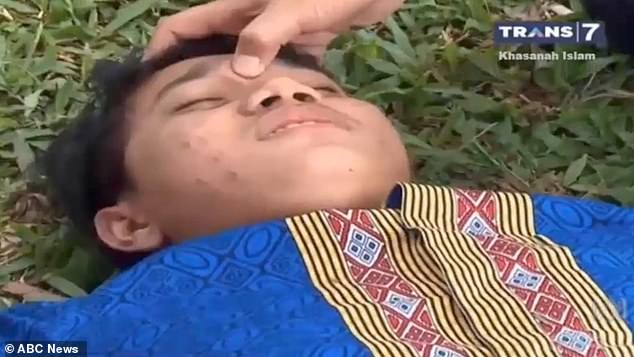 The footage shows the men lying on the floor, clearly in a distressed state, being told by a man standing over them to ‘Take it seriously’ and ‘To repent’ so that ‘God can forgive them’ 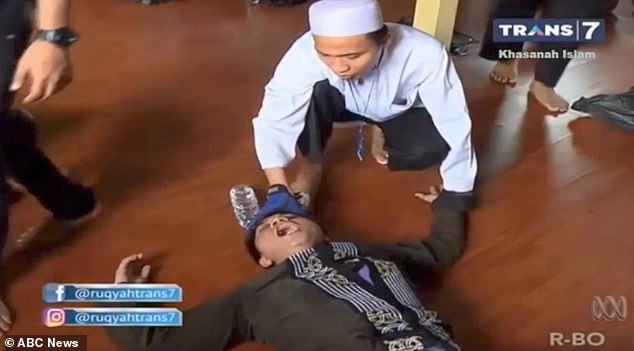 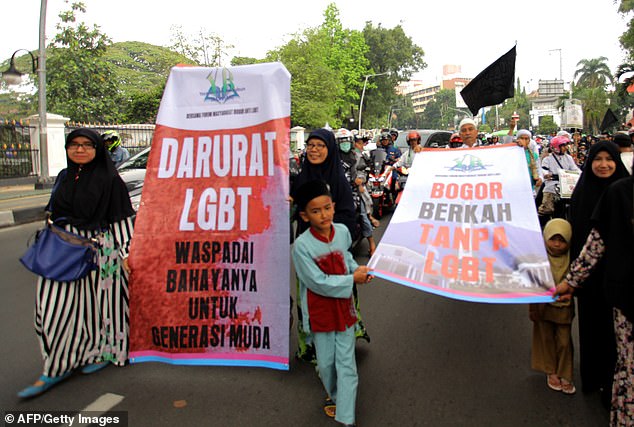 This picture taken on November 9, 2018 shows thousands of anti-LGBT demonstrators marching in Bogor, outside the capital Jakarta, fanning fears that authorities will beef up their crackdown in response

Indonesia’s LGBT community has always been vilified as immoral.

But the recent police crackdown – including authorities hosing down a group of transgender women in what they called a ‘mandatory bath’ – comes against the backdrop of a recent lurch toward religious conservatism.

Several mosques in West Java were recently urged by the local government to conduct sermons on the dangers of homosexuality.

And Indonesia’s biggest Muslim organisation – the 80-million-member Nahdlatul Ulama – has called for a clampdown on same-sex relations. 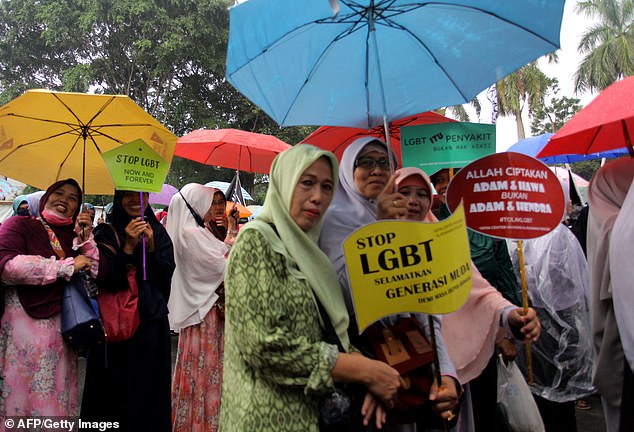 Thousands of anti-LGBT protestors took to the streets outside Jakarta on November 9, whilst a television station has even started airing shocking ‘exorcism’ shows claiming to ‘cleanse’ homosexuals

Concerns have been aggravated by president Joko Widodo selecting a conservative cleric, known for his disparaging views of the gay community and other minorities, as his running mate for next year’s elections. 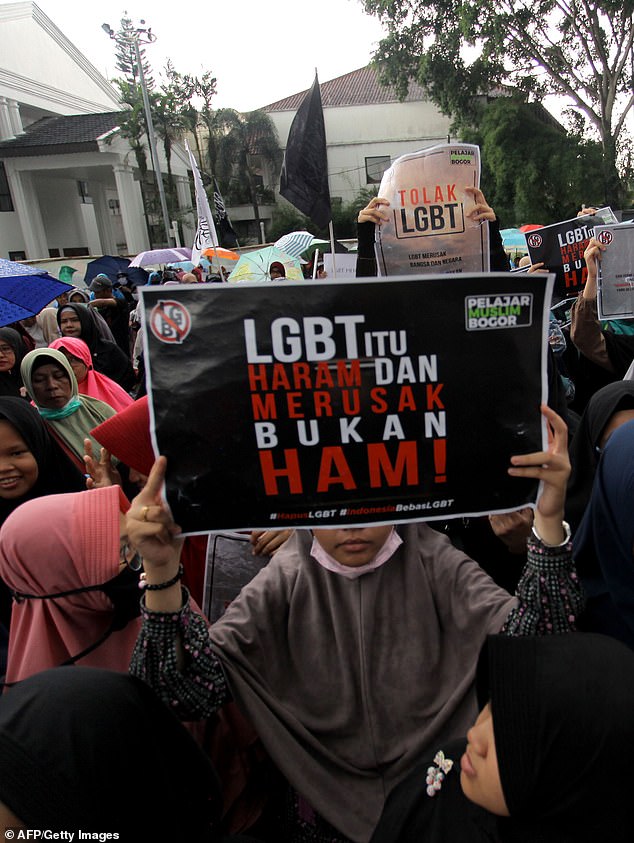 Indonesia’s small LGBT community is under attack as a spike in hateful rhetoric and record number of arrests raise fears that the vulnerable group could be targeted for violence, critics say.

Police arrested at least 300 suspected LGBT people last year – a record – mostly under an anti-pornography law as homosexuality and gay sex are legal in Indonesia.

This month, 10 people described as ‘suspected lesbians’ were arrested in West Sumatra, following the detention of another eight lesbians and transgender people in October.

‘This situation is alarming as the hateful abuses by law enforcement bodies… are seen as a normal practice by many people,’ said Usman Hamid, Amnesty International Indonesia’s Executive Director.

However, officials are unfazed by the criticism.

‘We’re being consistent in our efforts to eradicate LGBT (behaviour) because it’s very destructive,’ said West Sumatra deputy governor Nasrul Abit, adding that thousands of people were having ‘deviant sex’ in the region.

Parliament is considering a move to criminalise sex outside marriage – including gay couples – while the health ministry previously announced plans to release a medical guide classifying homosexuality as a mental disorder. 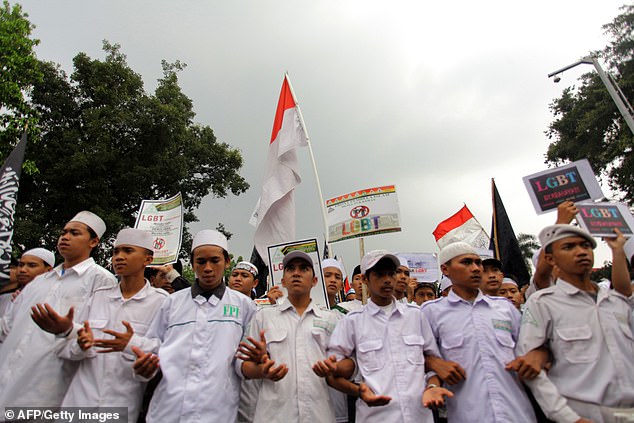 Thousands of anti-LGBT demonstrators marching in Bogor, outside the capital Jakarta, on November 9

Google in January pulled one of the world’s largest gay dating apps from the Indonesian version of its online store in response to government demands.

The latest crackdown can be traced back to 2016 when Indonesia’s higher education minister Mohamad Nasir called for LGBT student groups to be banned from universities, and the defence minister criticised gay and trans rights activism, Human Rights Watch said.

Since then, police have raided nightclubs, saunas, hair salons, hotels and even private homes in pursuit of LGBT people.

Gay people have been publicly flogged in Aceh under the province’s Islamic legal code.

Local police there made global headlines when they arrested a dozen transgender people and publicly humiliated them by chopping off their long hair and forcing them to wear men’s clothes.

But there are few hopes that Widodo or other senior officials vying for re-election will protect a widely hated minority, said HRW researcher Andreas Harsono.

‘We need leaders who have the courage to say this is wrong.’